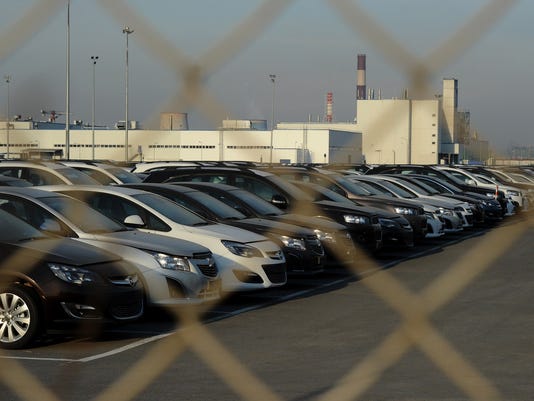 Opel and Chevrolet cars are seen at a parking near the factory of U.S. auto producer General Motors in Shushary, outside Saint Petersburg, on March 18, 2015.(Photo: OLGA MALTSEVA / AFP/Getty Images)

General Motors Co. and Ford Motor Co., Detroit’s two venerable rivals, usually compete toe-to-toe in everything they do. But in Russia, they are headed in radically different directions.

GM is cutting losses, having taken a $428 million one-time charge as the company winds down many of its Russian operations this year. Ford, meanwhile, is spending more money on new models and plants, increasing its bet even as the falling ruble and low oil prices have hammered car sales in the market.

Their divergent paths hint at where each company is headed not only in Russia but around the globe. GM tried to expand in many regions before its 2009 bankruptcy and is now shuttering some weak overseas businesses while Ford is trying to make up for having arrived late to the booming car market in China.

“GM chose the nuclear option,” said Warren Browne, president of WP Browne Consulting in Detroit and former head of GM’s Russia operations. “Ford is trying to navigate it. In growth markets, it’s not always growth. You can’t ignore turmoil, but how many other markets have Russia’s potential?”

Under CEO Mary Barra and President Dan Ammann, GM no longer feels the need to chase sales and global market share at the expense of profit. The Detroit-based company has targeted a 20 percent return on invested capital, so riding out the economic downturn and political turmoil under Russian President Vladimir Putin doesn’t fit the strategy.

“As we looked at the Russian market, the challenges today, and when it could recover, it just wasn’t a good return on investment,” GM Chief Financial Officer Chuck Stevens said in an interview. “We don’t think the market is going to recover anytime soon.”

GM will stop selling mainstream Chevrolet and Opel cars in Russia and pursue sales only of profitable higher-priced autos, including Cadillac luxury models and select Chevrolets, such as the Tahoe large sport utility vehicle, Camaro muscle car and Corvette sports cars. The largest U.S. automaker also is pulling its Chevy brand from Europe and exiting Thailand and Indonesia.

“GM was minimizing risk in a market with many unknowns,” said Michael Robinet, a consultant with IHS Automotive of Southfield, Michigan. “GM is focusing on those markets that have less risk and more certainty, like China and India.”

Meanwhile, Ford executives are determined to keep investing in Russia so they don’t repeat the mistake they made in China, where the company followed GM and Volkswagen AG and lags far behind both in sales to this day, said people familiar with the company’s internal discussions.

In the past month, the Dearborn-based automaker bought preferred shares in its joint venture with Russian automaker Sollers and is now the controlling partner, consolidating the outfit’s financial results into its own.

The company has acknowledged challenges in Russia. In July, Ford said it wrote down its entire $329 million investment in the joint venture with Sollers.

“I don’t think Ford has the flexibility that GM does in Russia because the Ford relationship is a joint venture with Sollers and the joint venture has a huge loan extended from Sberbank,” said Matt Stover, an analyst in Boston at Susquehanna Financial Group. “Given that structure, they can’t hit the brakes in the same way GM is doing.”

Ford has invested $100 million in a plant in Yelabuga, started building its Transit van and will spend an additional $274 million to build an engine plant there. This month, the company started making its Mondeo family sedan, bringing investment in its plant in St. Petersburg to $400 million since 2002.

The company has four models for sale in Russia that are built by its Ford Sollers joint venture, which plans to offer four additional models this year. Even today, Russia is Europe’s fourth-largest market for new vehicles, according to Ford.

Ford has suffered pretax losses of more than $2.5 billion in Europe over the last two years, with Russia accounting for a significant portion of the deficit. The automaker said last year the deteriorating situation in Russia would prevent it from achieving a goal to make money in Europe this year.