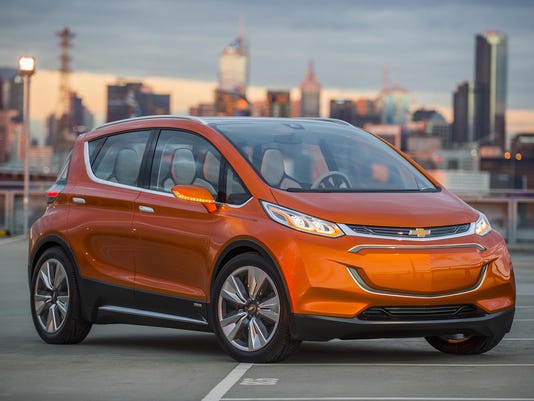 Warren — General Motors Co. said Tuesday its partnership with LG Corp. to co-engineer several components for the Chevrolet Bolt EV has helped speed up development of the all-electric car that will go into production next year.

The Detroit-based automaker called its relationship with LG “unprecedented.” It entered into a joint development agreement in 2011 and relied upon LG’s expertise in infotainment, battery systems and components for the car that will have a range of more than 200 miles. It will be sold across the U.S. and in select global markets and GM aims to classify it as a crossover. The aim is to price it at less than $30,000 with a federal rebate.

Automakers not that long ago acted as dictators in past supplier relationships, said Mark Reuss, GM’s head of global product development, purchasing and supply chain.

“We told them what to do it, how to do it and how much we’d pay for it. And what we found is that behavior blows up in your face, frankly,” Reuss told reporters during a media briefing at GM’s Warren Tech Center.

Reuss said today’s competitive environment and particularly around electric vehicles, requires a different approach. Instead, with this unique relationship for the Bolt, hundreds of workers from GM and LG companies have worked closely for months to develop the vehicle in both South Korea, where LG is based, and in the United States.

A number of LG companies, led by LG Electronics Vehicle Components, helped develop the Bolt EV. LG Electronics has invested more than $250 million in Korea to develop and manufacturer components for the car.

In all, LG is supplying 11 components for the Bolt, said Ken Chang, vice president of LG Electronics Vehicle Components. Those include a GM-designed electric drive motor for the Bolt EV, a power inventor module that converts power for the drive unit, an on-board charger, battery cells and pack, battery heater, instrument cluster, infotainment system and other components.

“The opportunity to work on the Bolt EV program represents a truly innovative and unprecedented way of working with a partner,” Chang said.

LG launched its vehicle components division just two years ago and Chang said it sees “tremendous potential” around electric vehicles. GM and LG officials would not answer whether their agreement was exclusive.

Chang also declined to say whether the deal will lead to an expansion of LG Chem’s Holland battery cell production facility.

The Bolt will be built at GM’s Orion Assembly Plant in Orion Township beginning in late 2016, GM said. The company will spend $160 million to upgrade the plant.

GM showed the Bolt concept, a hatchback with seating for five, earlier this year during the North American International Auto Show. GM has not announced production volume for the car, but LMC Automotive earlier this year told The Detroit News it expects the carmaker will produce in the high 20,000 to low 30,000 range annually once production ramps up.

GM has worked with LG since 2007, when LG Electronics supplied a module for OnStar. LG Chem, a LG company, was chosen as the sole supplier of battery cells for the first-generation Chevrolet Volt that launched in 2010.

LG Chem produces lithium-ion battery cells for the Volt plug-in hybrid, Cadillac ELR and Chevrolet Spark EV and will produce them for the plug-in hybrid electric version of the Cadillac CT6 at its plant in Holland.

The plant was awarded a $150 million federal grant in 2009 to build an 850,000-square-foot plant in Holland. The firm ran into some controversy, however, after it spent $143 million without producing a vehicle battery cell and employing fewer than half of the 440 it had promised.