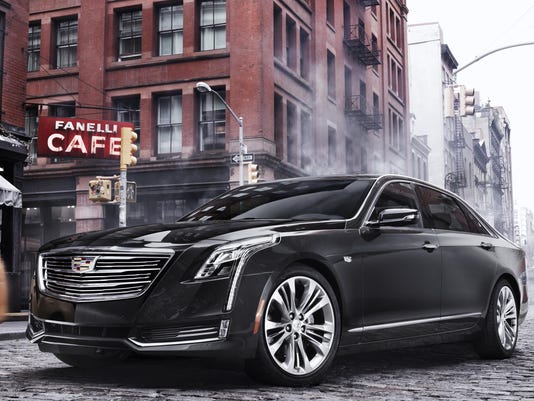 The CT6 is part of Cadillac’s $12 billion product offensive that will put eight new models in showrooms by 2020.(Photo: GM)

Next month’s Academy Awards may be tense with questions about the diversity of actor nominees, but Hollywood’s TV spectacular will be a showcase for greater variety in the U.S. luxury automobile segment. The all-electric, American-made Tesla, not BMW or Mercedes, will be the vehicle of choice for many celebrities arriving on the red carpet.

And for the second year in a row, Cadillac will unveil a new ad for the Oscars featuring its most ambitious vehicle yet: the 2016 Cadillac CT6.

Billed as the flagship for Detroit’s remade luxury marque, the CT6 takes on the BMW 7-series, Mercedes S-Class and Audi A8 in the premium luxury sedan segment the Teutonic trio has long dominated.

Taking a pass on the Super Bowl, Cadillac’s focus on Hollywood’s big night is part of a strategy that confronts European makers where they are strongest – on the East and West coasts where 40 percent of luxury sales are made. That meant relocating Cadillac’s headquarters from Detroit to New York.

And it means a CT6 product that aims to out-engineer the German-makers with the most advanced, lightest, best-handling chassis in its class. Scheduled for vehicle delivery in early March shortly after the Oscars, the CT6 will start full production in mid-February in Hamtramck.

Is the 2016 Cadillac CT6 the best car Cadillac has ever made? Detroit News auto critic Henry Payne thinks so. Read on for his review. Henry Payne, The Detroit News
Fullscreen

The CT6 advantage begins with a look. The Caddy's loooong hood is a head turner. Once Caddy has sucked you in with eye candy, it reveals its transformational trick: A 3,657 pound-chassis that makes this car handle like a sports coupe. Henry Payne, The Detroit News
Fullscreen

Combined with the signature, vertical Caddy running lights and a sculpted face -- wide mouth, headlights pushed to the edges -- the CT6 demands you get to know it better. Henry Payne, The Detroit News
Fullscreen

With most of its bulk set over the rear wheels, the car has a crouched, catlike stance. Gorgeous. Henry Payne, The Detroit News
Fullscreen

So lightweight is the full-size CT6 that it tips the scales 58 pounds shy of its midsized CTS sibling and 38 pounds lighter than a Camaro SS. Henry Payne, The Detroit News
Fullscreen

The CT6's front shines but the view from behind is undistinguished. Jim Fets, Cadillac
Fullscreen

The rear camera mirror with streaming video could use some fine-tuning. Jim Fets, Cadillac
Fullscreen 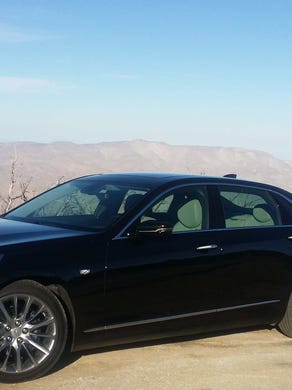 The base rear-wheel drive model comes with the same 265 horsepower turbo 4 that is the most popular CTS engine, because the larger CT6 is nevertheless lighter by 100 pounds. Henry Payne, The Detroit News
Fullscreen

Cadillac says the CT6 has an industry-first, 360-degree exterior video recording system and a rear camera that streams high-resolution video to the rearview mirror to expand visibility for drivers. Cadillac
Fullscreen

“If you are a resurgent luxury brand, then the premium luxury sedan market is where you make your bold statement,” said Cadillac President Johann de Nysschen at the Los Angeles media test debut of the CT6 last week. “It’s where our reputation was built. Cadillac is at the forefront of innovation again.”

The CT6 is as part of an ambitious, $12 billion product offensive that will bring eight new models to showrooms by 2020.

Boasting an all-new Omega platform, the CT6 is on the leading edge of automotive diet plans. Using a combination of steel and aluminum castings and sophisticated bonding techniques, the CT6 uses 20 percent fewer parts than previous Cadillacs.

“This is a living and breathing experiment processing techniques that haven’t been used before,” says auto analyst Dave Sullivan of AutoPacific. “It’s also an experiment in what’s coming from Cadillac.”

The result is a large sedan that weighs just 3,657 pounds. That’s not only 1,000 pounds less than a comparably sized S-Class, but it is even lighter than a midsize BMW 5-series or sibling Cadillac CTS. The CT6 will also be significantly lighter on the wallet, starting at $53,495, or some $30,000 south of a base 740i.

Kelley Blue Book auto analyst Karl Brauer said the latest effort by Cadillac to make a German-rivaling luxury sedan has succeeded. “The CT6 is more engaging to drive than the comparable 7 Series or S-Class sedans that cost tens of thousands more.”

The light weight enables Cadillac to install smaller, more efficient turbocharged engines in the CT6 than the big V8s found in German competitors – yet they promise similar power-to-weight rations. The CT6 will come with the same 265-horsepower turbo-4 that has proved popular in the 100 pounds-porkier, mid-size CTS – as well as an all-new, 3.0-liter twin-turbo V6 making 404 horsepower. To appeal to Hollywood greens – and Tesla customers – Cadillac also will premiere a plug-in hybrid version later this year.

Experts caution the Cadillac brand will have to be patient for blockbuster sales.

“Their coastal strategy is good – they’re going where the customers are,” says AutoPacific’s Sullivan. “They’ve been trying for 15 years and we’re looking at another 10 years for this to work. They need a good crossover lineup, and they need more ‘tweener’ models like the Germans.”

Henry Payne is auto critic for The Detroit News. Email him at hpayne@detroitnews.com. Follow him on Twitter @HenryEPayne.