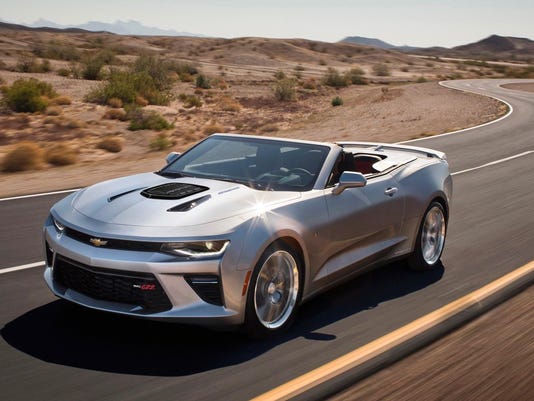 Reeves Callaway said he was able to boost the 2016 Camaro’s engine output to more than 600 horsepower without requiring major modifications to other components.(Photo: Roche photo)

You soon may see some brand new 2016 Chevrolet Camaros with something sticking up out of their hoods. On Feb. 18, Callaway Cars, long known for its Callaway Corvettes, launches its Callaway Camaro SC600.

Reeves Callaway has been modifying and racing cars since the mid-1970s. Among other things, it produces all the C7 Corvettes racing outside North America in GT3 competition. Callaway Cars has become a specialty car manufacturer and performance parts producer, and has decades of experience with Chevy engines. There were, however, what Callaway called a “few tricky bits” to unleashing this newest Callaway Camaro.

“One of which was once you put the supercharger on, you couldn’t close the hood,” Callaway said. “Minor details.”

So they made a cutout in the hood for it and let the supercharger be exposed in the tradition of Detroit muscle-car shakers.

“That’s what’s going to be cool about the Camaro, you can see the manifolding of the supercharger without opening the hood,” he said.

And there’s a dividend in this regarding the car’s performance, he added.

“Once you open the underhood, you let a lot of the trapped heat escape so there’s a natural convection that happens,” he said. “As the vehicle starts to move down the road, the airflow over the top of that opening, augmented by a little gurney or aerodynamic lip that we mold in to the opening, extracts a tremendous amount of heat from the engine compartment. That’s a win-win situation.”

You might wonder about boosting the engine’s output to more than 600 horsepower without making major modifications to other components, but Callaway praises the work of the Camaro engineering team for building such a strong car. “The platform is very capable,” he said, noting there is no need to change suspension, brakes or tires. “The 2016 Camaro is a superb car that’s light, nimble and fun to drive.”

A GenThree Callaway supercharger stokes the power of the V-8 engine in the 2016 Chevrolet Camaro. (Photo: Callaway Cars)

Mike Zoner, a veteran engineer and managing director of Callaway Cars, noted the TVS 2300 cc-based Callaway GenThree supercharger produces power without overheating so the car can do “run after run and lap after lap,” enabling the SC600 Camaro to provide “supercar capabilities with superb drivability and full compliance.”

In addition to the supercharger, the Callaway SC600 package includes a “TripleCooled” intercooler, which Callaway developed for its SC757 Corvette Z06; low-restriction, high-recovery cold-air intake; badging inside and out, including door-sill plates and key fob; and a 3-year/36,000-mile warranty on the Callaway parts.

Like all new Camaros, the Callaway cars are built in Lansing, but then are shipped directly to Callaway facilities in either Connecticut or California to be up-fitted. From there, they are sold through a network of 32 selected Chevrolet dealerships. The SC600 package starts at $54,290, but that figure includes the price of a base Camaro SS.

The SC600 package can be installed on any new Camaro SS, coupe or convertible with manual or automatic transmission. Callaway noted that the SC600 up-fit adds the “cost of a pizza a week” to your monthly payments.

Larry Edsall is a Phoenix-based freelance writer. You can reach him at ledsall@cox.net.