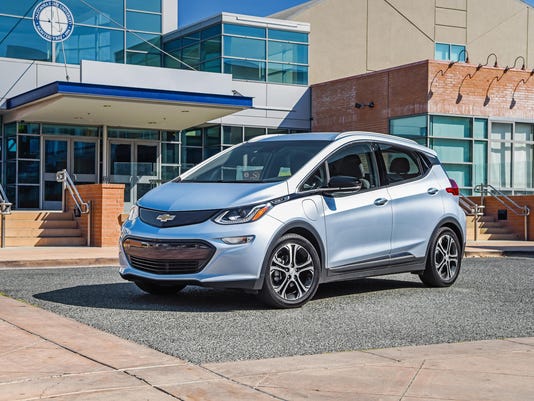 Flint — General Motors Co. wants to be the first automaker to sell an affordable electric vehicle that also generates a profit.

Mark Reuss, GM’s head of global product development, and Chairman and CEO Mary Barra, each made the proclamation in recent weeks. The new publicly stated goal comes months into the national launch of the new 2017 Chevrolet Bolt EV, a pure electric with an estimated 238 miles of range available for about $30,000 after a federal income tax credit.

Reuss, speaking with reporters last week in Flint, said it’s the “mantra inside of product development.” He would not say when that will happen, nor would he address the price point of “affordable” electric cars.

“We’ll be there before then, I know we will,” Reuss said.

Last year Tesla Inc., which will launch its entry electric sedan the Model 3 beginning in the third quarter, said its battery pack cost per kilowatt hour was less than $190. Tesla has indicated that will drop as it takes advantage of the scale at its Gigafactory in Nevada.

GM has not said if the Bolt is profitable, and some analysts think it’s unlikely.

Through April this year, GM has sold 4,384 Bolt EVs with limited availability in a handful of states. The small crossover, built at GM’s Orion Assembly Plant in Orion Township, will be available to order nationally this summer.

GM’s ownership of its own battery chemistry and integrating the battery pack with its own electric motors also is helping drive EV cost downward, Reuss said. The company says economies of scale – as it deploys more EVs here and in China – will aid with cost.

GM also has said Buick will have a pure battery-electric for China by 2020.

Customer adoption of EVs has been slower than predicted, but the Consumer Federation of America is predicting sales of pure EVs and plug-in hybrid electrics will increase this year largely with the new Bolt and quickly ramping up volume production of the Model 3. The group says U.S. sales of EVs and plug-ins last year totaled about 159,000, up 37 percent from the year before. It predicts sales could grow by more than 100 percent this year to nearly 350,000 sales. The prediction banks largely, however, on strong sales from the Bolt and Tesla Model 3.

Tesla said last week it is on begin production of the Model 3 in July, with higher-volume production beginning by the end of the year. The Palo Alto, California-based company received some 370,000 orders with $1,000 down for the Model 3, which Tesla has said will have a range of about 215 miles and comes with a price tag of about $35,000 before incentives.

GM also sees scale opportunities through the use of autonomous EVs. The carmaker has said it believes the best platform for autonomous ride-sharing vehicles will come in the form of a pure electric such as its Bolt EV. However, Ford Motor Co.’s view of the ideal first application for autonomous vehicles is a hybrid vehicle. It plans a fully autonomous hybrid vehicle for commercial use in a ride-hailing or ride-sharing service in 2021 and is testing hybrid Ford Fusions.

“The energy drain that comes from the automation or the need for all the computing power, requires more than just what most battery electrics can do for range purposes,” Joe Hinrichs, Ford president of the Americas, told reporters last month at the New York auto show.

“We’ve got a platform that’s designed for mobility and ride-sharing as well. So we’ve got a platform that is all electric that is high use and high up-time. And so that’s a great formula for electrified vehicles,” Reuss said. “At the end of the day, if you can get up-time across a fleet of electrified vehicles, you can drive cell cost down, you can drive the operating cost down.”