Why the next Corvette pace car will be mid-engine

Mark Reuss' crash was not the only one in Turn 2 – but it is Exhibit A in why Corvette is moving to a mid-engine platform.

Why the next Corvette pace car will be mid-engine 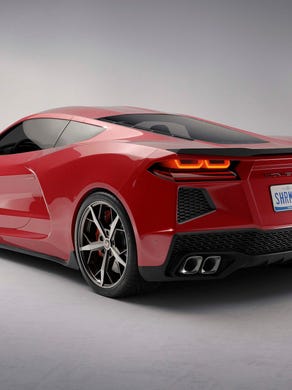 The coming, mid-engine Corvette C8 - here shown in a Car and Driver artist's rendering - would feature a push-rod V-8 engine with an aluminum frame. Nick Kaloterakis, Car and Driver
Fullscreen

A Car and Driver rendering of the 2020 Corvette C8 - the first mid-engine version of the storied Chevy sports car. Nick Kaloterakis, Car and Driver
Fullscreen

Car and Driver reports that the 2020 mid-engine Corvette C8 - seen here in an artist rendering - will feature a high-end, AWD, hybrid trim. Power will come from a twin-turbo V-8 driving the rear wheels, and a 200-horsepower motor driving the front wheels. Combined, the system will make in excess of 1000 horsepower. Nick Kaloterakis, Car and Driver
Fullscreen

Vexed Vette. After spinning into the wall on the Detroit Grand Prix pace lap Sunday, the official IndyCar Corvette ZR1 pace car is loaded on a wrecker. No one was injured. Manny Katakis/Motrolix Network
Fullscreen

The Corvette ZR1 pace car has been used in 2018 for IndyCar races like the Indy 500 (shown here) and in Detroit where it was driven by GM exec Mark Reuss and hit the wall. Associated Press
Fullscreen

The mid-engine Corvette concept has a long design history. The Astro II concept was introduced at the 1968 New York Auto Show. Lead engineer Zora Arkus-Duntov and GM styling chief Bill Mitchell hoped the Astro would become the next-generation Corvette, but GM management decided the public was not ready for a mid-engine car. General Motors
Fullscreen

This is a Car and Driver rendering of the 2020 Corvette C8 — the first mid-engine version of the storied Chevrolet sports car.(Photo: Nick Kaloterakis, Car and Driver)

Pace driver and General Motors executive Mark Reuss wasn’t the only driver to spin in Belle Isle’s tricky Turn 2 on Sunday. IndyCar’s Santino Ferrucci came out of the pits too hot later in the race and spun, damaging his open-wheel race car's front wing.

But Reuss' Corvette ZR1 pace car’s crash is Exhibit A as to why Chevrolet is developing an all-wheel drive, mid-engine Corvette.

While putting 755 horsepower to the rear wheels, GM''s product boss spun the most powerful front-engine 'Vette ever into the retaining wall, scattering debris across the track and delaying the start by a half-hour.

It could have happened to anyone. But engineers and auto analysts say Reuss’ fortunes likely would have been better in a mid-engine, all-wheel drive car. Which is one of the many reasons Chevy, as The Detroit News reported two years ago, is bringing a mid-engine Corvette to market for model-year 2020. 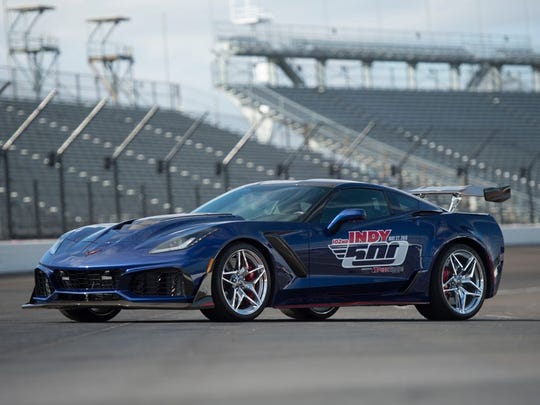 The Corvette ZR1 pace car has been used in 2018 for IndyCar races like the Indy 500 (shown here) and in Detroit where it was driven by GM exec Mark Reuss and hit the wall. (Photo: Associated Press)

"Sunday's incident would have been less likely to happen from a fundamentals perspective if he had been driving a mid-engine car," says retired GM engineer Tom Wallace, who ran the Corvette program from 2006-08. "A mid-engine would allow more tolerance so it's easier to put the traction down, while a front-engine car is going to shift to oversteer sooner."

Reuss, who wasn't injured, is hardly an inexperienced Sunday driver. He is a skilled, race-licensed pilot with countless hours on tracks around the world including Germany’s formidable Nürburgring. He has put the top-dog $135,000 ZR1 through its paces on tracks from GM’s challenging Milford Proving Grounds to the epic Road Atlanta Raceway.

He had done multiple practice laps around Belle Isle last week in preparation for his pace stint. No stranger to the rough, twisty street course, Reuss paced the IndyCar field two years ago aboard the ZR1’s sibling, the 650-horse Z06.

Yet, when confronted with a “green” track free of sticky rubber after a day of rain, he made the same mistake as many others – including A.J. Almendinger who infamously crashed his Penske team IndyCar in Turn 2 on Lap 1 in 2013.

Reuss was apologetic in a Facebook post after the incident: “I have paced this race in the wet, cold, hot, and calm. On Z06s, Grand Sports, and other things. Today I let down my friends, my family, Indycar, our city and my company."

The IndyCar field behind him was sympathetic.

“The track changes surfaces there,” Scott Dixon, who finished first and fourth in the weekend doubleheader, said in an interview with The Detroit News. “There's actually a bit of elevation change there, too, which is what typically catches people out. We had a couple (IndyCars) spin out there this weekend."

Turn 2 is a blind, off-camber left-hander. Coming out of the pits under hard throttle, it's easy to apply too much thrust as the car gets light over the turn's crest, get the rear end loose and swap ends.

Said Team Penske IndyCar driver Will Power: "I felt really bad for whoever was in the pace car. Where it happened is such a bad corner. It's real easy to do."

And even easier when it’s a 3,600-pound production car with a supercharged V-8 boat anchor up front.

As horsepower numbers have skyrocketed in recent years, supercars have gone to mid-engine, all-wheel drive configurations for better stability and better traction. In recent years the Porsche 918, Acura NSX and Lamborghini Huracan have all been introduced as all-wheel drive, mid-engine cars.

Ex-Corvette engineer Wallace says that "mid-engine cars are a more comfortable way to get close to the limit in turns."

That benefit is important, too, for Corvette's racing program which increasingly has to deal with more sophisticated mid-engine competitors in the IMSA Weathertech Sports Car Championship like the Ford GT and Ferrari 488. Even Porsche's iconic rear-engine 911 race car has moved its powerplant forward of the rear axles.

“Why mid-engine (Corvette)? Because the C7 Corvette ... is tapped out,” wrote Car and Driver magazine, which has closely followed the mid-engine car's development – code-named "Emperor" – since 2014 with details and spy shots. “Adding more power to a front-engine design only accelerates the conversion of rubber into smoke at the rear. Moving the engine’s mass closer to the drive tires is the most effective means of improving Corvette acceleration and braking.”

The magazine reports that the mid-engine 2020 Corvette C8 – which has been seen roaming the streets near GM's Milford test track – will carry the marque's familiar push-rod V-8 (married to a quick-shifting automatic transmission) and will carry a familiar, affordable supercar entry price.

Options are said to include  a twin-turbo 5.5-liter V-8 driving the rear wheels and a 200-horsepower electric motor turning the fronts. Horsepower numbers over 1,000 demand– the traction and balance of mid-engine, all-wheel drive to stay on terra firma.

"With today's horsepower numbers, every supercar is moving towards AWD and mid-engine chassis," says Karl Brauer, an auto analyst with Kelley Blue Book, and owner of a mid-engine Ford GT and front-engine 840-horsepower Dodge Demon.

The Demon, the fastest production car ever through the quarter-mile, stirred consternation when it was launched last year with Automotive News editorializing that the rear-wheel drive coupe was so unsafe "that its registration as a road-worthy automobile should be banned."

Brauer says the Demon has to go to extraordinary technical lengths to keep its rear tires from spinning like a bandsaw, including mechanical and electronic tricks to the suspension, transmission and engine.

When the mid-engine Corvette debuts next year, Wallace is confident that "it will be fundamentally quicker with less chance of going sideways." But, adds the veteran GM engineer with dozens of laps around Belle Isle, "if you're not careful through Turn 2, a mid-engine Corvette could still lose it."

Santino Ferrucci and Mark Reuss no doubt would agree.