Ohio gov at auto show: 'Time to be cooperative' with GM

Ohio gov at auto show: 'Time to be cooperative' with GM 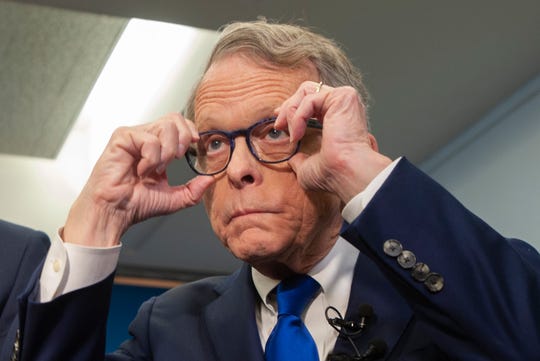 Ohio Gov. Mike DeWine comment on the automotive industry as it pertains to Ohioans after touring the show floor at the North American International Auto Show at Cobo Center in Detroit on Wednesday, January 16, 2019. (Photo: John T. Greilick, The Detroit News)

Detroit — Ohio Gov. Mike DeWine, on his third day in office Wednesday, trekked to the Detroit auto show to speak to automakers and understand what General Motors Co. needs to prevent the closure of its assembly plant in Lordstown, Ohio.

DeWine, a Republican, is scheduled to speak with GM CEO Mary Barra on Thursday. It is the latest high-profile attempt by a political figure to pressure Barra into reversing austerity plans that call for cutting 8,000 salaried employees, idling five North American plants — including two in Metro Detroit — and affecting the jobs of 3,300 hourly workers.

DeWine,said he hopes to build a relationship and emphasize that Ohio wants to be a partner with the Detroit-based automaker.

"This is not the time to bash anybody," DeWine told media at the North American International Auto Show, "this is a time to be cooperative and try to work and move forward for jobs in Ohio."

The governor said he hopes to better understand GM's timeline and if there is a possibility to save the Ohio plant.

"What happens in Lordstown is vital," DeWine said. "We want to facilitate a better result. If that means, if they're not going back there, we know there are other people who are interested, we want to help facilitate that."

DeWine would not specify if he has heard from anyone who may be interested in the Lordstown plant. For now, he said he is focused on GM and what the state can do to keep it in the Mahoning Valley plant, a discussion that is happening between the governor's office and the state's congressional delegation.

"We are going to work together to put together what type of package they need to make that happen," he said. "Again, we have to know exactly what they need."

Ohio Lt. Gov. Jon Husted said he and DeWine also have met with leaders at Fiat Chrysler Automobile N.V. who they said remain "bullish" on the Toledo plant.

"This is technology on wheels," Husted said. "Ohioans need to see ... there are great opportunities out there working for these companies, the suppliers, the auto manufacturers. There's a lot of future in this industry in Ohio. We need to make sure these companies know that Ohio will be a great partner for them for future investment."

The plants are idling are different dates, but they will not officially close. The future of the facilities will be determined during 2019 negotiations with the United Auto Workers union.

Still, Green said he expects the plant to halt production of the Chevrolet Cruze in March, but remains hopeful GM will bring a new product to its assembly lines.

The company is planning to lay off nearly 6,000 salaried workers this year after a buyout program last month had 2,250 takers. The salaried buyouts and the layoffs together will affect 8,000 North American employees and a number of global executives, none of whom are part of the senior leadership team.

GM later tried to clarify what the plant idlings might mean: It expects to offer new positions to about 2,700 of those workers through transfers. But some of the workers would have to commute long distances or move to other parts of the country.

The clarification has done little to mollify politicians who are incensed the Detroit automaker is cutting staff a decade after receiving a taxpayer-funded bailout.

New Michigan Gov. Gretchen Whitmer, D-East Lansing, said Tuesday during her visit to the Detroit auto show that a meeting with Barra "is in the works."

Asked after walking the floor at the Detroit auto show for the first time as governor if she could report any progress on convincing GM to reverse course on its austerity plans, Whitmer said: "I have not yet met with Mary Barra, I know a meeting is in the works. I did have a brief meeting earlier today with the premier of Ontario, but we did not discuss this particular (topic).

"Michigan jobs are first and foremost on my mind," she continued. "We need to know that the investment is here and that people are at threat of being displaced or without a job are relocated as quickly as possible and that we’re going to continue to make their investment in Michigan and thrive here."

"We are in an industry that is transforming faster than I've ever seen in my 38-year career," she said after meeting in Washington, D.C., with U.S. Sens. Rob Portman, R-Ohio, and Sherrod Brown, D-Ohio, following the initial announcement of the plant decisions.

"What we are trying to is make sure that General Motors is strong and that we're in a leadership position with technologies like electrification and autonomous vehicles and connectivity, because that's what customers want," Barra continued. "That's where industry is going."