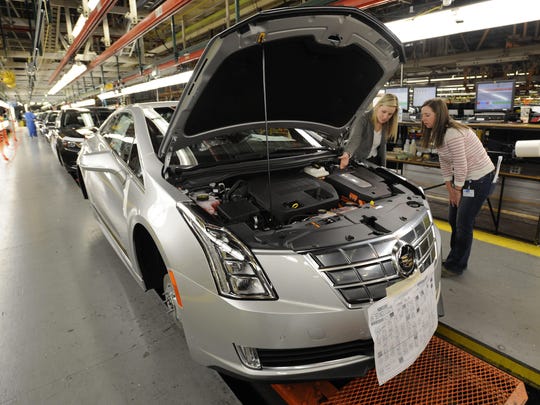 General Motors Co. is extending production of the Cadillac CT6 and Chevrolet Impala at its Detroit-Hamtramck Assembly Plant until January 2020, extending the plant's production timeline by seven months.

Detroit-Hamtramck, which is one of five North American plants scheduled to indefinitely idle as part of GM's larger restructuring plan, was originally scheduled to stop all production on June 1.

"We are balancing production timing while continuing the availability of Cadillac advanced technology features currently included in the CT6-V, the Blackwing Twin-Turbo V-8 and Super Cruise," GM said in a statement.

Continued production of the Impala, which shares a production line with the CT6, is necessary to keep the plant running efficiently, according to GM. The Impala is a popular fleet vehicle, but vehicles built through January 2020 will be for the retail market.

GM President Mark Reuss said at an investor day earlier this year that Cadillac still needed a flagship like the CT6, which is the only vehicle equipped with the luxury brand's hands-free Super Cruise technology. He called reports that the vehicle would go away when production ends at Detroit-Hamtramck "speculatory."

Both Reuss and GM CEO Mary Barra have said they wanted to keep the CT6 in the U.S. market. Importing from China, where the vehicle is built for the Asian market, was not the first choice.

In its restructuring announcement on the Monday after Thanksgiving, GM was careful to characterize the affected plants — including Warren Transmission, Baltimore Operations and Lordstown Assembly in Ohio — using the term "unallocated."

The use of the word "unallocated" deliberately avoids the words "idle or "close," which are explicitly addressed in the 2015 agreement between GM and the UAW. The UAW is challenging the decision.

Lordstown will be the first plant to indefinitely idle. The Northeastern Ohio plant is scheduled to stop production March 8, extended by a week past the original idling date, Flores said.

GM said in its statement Friday that the status of Detroit-Hamtramck will still be "unallocated" when CT6 and Impala production stops in January 2020. The UAW and GM will negotiate a new contract in September, and allocating product to the idled or soon-to-be-idled plants is expected to be a top priority of UAW-GM leaders.

UAW President Gary Jones and Vice President and director of the GM department Terry Dittes said in a joint statement that they are happy with GM's decision to extend production at Detroit-Hamtramck.

Said Jones and Dittes: "For those UAW brothers and sisters at GM Warren Transmission Operations GM Lordstown Assembly and in the GM GPS Baltimore plant in Maryland, let me reiterate that the UAW will leave no stone unturned in seeking to keep your plants open and we hope today’s news brings a measure of hope as we continue that important work."