Born of high expectations, Chevy Cruze hits the end of the line

Born of high expectations, Chevy Cruze hits the end of the line 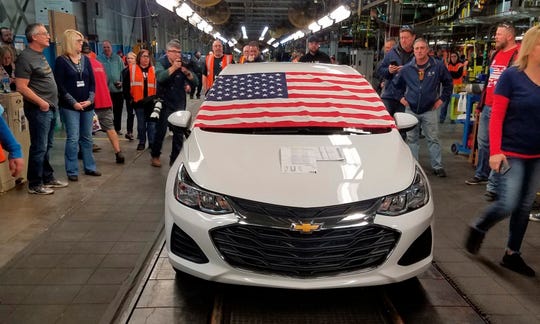 An American flag drapes the hood of the last Chevrolet Cruze as it comes off the assembly line at a General Motors plant where 1,700 hourly positions are being eliminated perhaps for good, on Wednesday, March 6, 2019, in Lordstown, Ohio. The factory near Youngstown is the first of five North American auto plants that GM plans to shut down by next year. (Photo: AP)

So long, Chevy Cruze, you burned so very brightly.

The last Cruze came off the Lordstown assembly line in Ohio on Wednesday as General Motors Co. shut down the plant and abandoned the compact sedan segment. The move comes as GM has signaled a shift away from sedans and into SUVs and electric vehicles as it idles five plants in the U.S. and Canada that make the Cruze, Chevrolet Impala, Chevrolet Volt, Buick Lacrosse, Cadillac XTS and Cadillac CT6.

The Cruze leaves behind 142,617 customers who bought the car in 2018 – a mid-level talent in a robust, if shrinking, 2.5-million small-car sales segment in the U.S.

The Cruze enjoyed a short but thrilling roller-coaster ride over its eight-year career.

Slotted between the subcompact Sonic and mid-size Malibu, the Cruze was Chevrolet's third compact entry in three decades, following the Cavalier and Cobalt. It debuted in 2011 at an opportune time, riding America’s shift to small sedans as the Great Recession squeezed incomes, and memories of $4 a gallon gas were fresh. 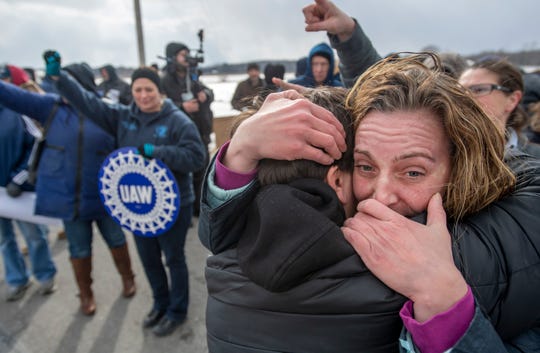 Amy Drennen, right, of Lordstown, Ohio, an employee at General Motors for 12 years, receives a hug from Pam Clark, as people gather in front of the General Motors assembly plant, Wednesday, March 6, 2019, in Lordstown, Ohio. Wednesday is the last day of the plant's Chevrolet Cruze production, a move that will eliminate nearly 1,700 hourly jobs and idle the plant. (Photo: Steph Chambers, Pittsburgh Post-Gazette via AP)

Its debut was emotional for GM, coming as the most significant model launch since the company’s reorganization under a federally led bankruptcy.

“This is everything for us,” then-GM President of North American operations Mark Reuss said at the car's Ohio launch in 2010. “The rebirth of the American economy starts right here at Lordstown with a world-class, high-volume car built in the heartland of America.”

Getting up to 48 miles per gallon on the highway, the Cruze cruised to a peak of 273,060 sales in 2014 before crashing to earth as the U.S/ economy rebounded, gas prices stabilized at around $2 a gallon and America fell back in love with sport utility vehicles.

The new badge proved a nice diversion for the brand, too, as the discontinued Cobalt became a lightning rod for bad news after a faulty ignition switch caused multiple fatalities. And with consistent volumes over 200,000 sales, GM invested in multiple variations including diesel-powered and hatchback models.

“The Cruze stands out by providing a comfortable ride, a surprisingly large trunk and several high-tech, luxury-adjacent features,” Car and Driver magazine enthused at the time. The Cruze was an early adopter of technology features like like 4G WiFi and smartphone app connectivity that were popular with young buyers. Despite its strengths, the Cruze never broke the magazine’s Top 10 picks like segment icons Honda Civic and Volkswagen Golf.

“We’ve already seen those Cruze customers migrating to the Trax. And we’re seeing an uplift in sales to the Equinox also,” said a Chevy spokesman. The Trax is a subcompact SUV that starts at $22,195, and the compact Equinox starts at $24,995

Analysts say that the price-jump to equivalent SUVs – and reliable sedan entries from Asian automakers – poses a risk for the brand.

“Chevy hopes most of those customers will go to utility vehicles,” says IHS Markit senior auto analyst Stephanie Brinley. “But there are people who still prefer sedans, so there is the risk they will buy a Honda Civic or Toyota Corolla instead.”

The Civic and Corolla have been the perennial best-sellers in the segment at over 300,000 units sold annually in the U.S. Both are manufactured in America’s heartland by non-union labor – the Civic in Indiana and the Corolla in Mississippi – even as Cruze’s Ohio home lays off its UAW workforce.

The Japanese badges proved formidable for upstarts like the Cruze, which spanned two generations over eight model years. The Corolla (11 generations of new cars) and the Civic (10 generations) have been in the U.S. market for about 50 years.

“That could be part of the Japanese success,” says IHS’s Brinley. “Chevy had to retrain the automotive buyer whenever they came out with a new model name.”

That branding will continue to be a challenge moving forward, experts say. The Cruze's demise is part of a larger shift for GM away from gas-powered vehicles towards a future of electric and autonomous vehicles. CEO Mary Barra envisions an all-electric future she refers to as “zero accidents, zero emissions and zero congestion.”

The company's autonomous-vehicle development unit GM Cruise LLC is  is working on an autonomous vehicle called the Cruise AV that will compete against established ride-sharing brands like Uber and Lyft. And GM is putting enormous capital into 20 new, all-electric, zero-emission vehicles by 2023.

For now, GM electric vehicles like the $37,000 Chevy Bolt EV are well out of the reach of Cruze buyers.

“The conversion to electric is not going to be a straight transition,” says Brinley. “You can’t move compact Cruze buyers into Bolt EVs. It’s going to be the next generation of buyer that’s going to switch to EVs. A lot is expected to happen between now and then.”

For now, then, Cruze buyers who want to stick with Chevy sedans will have to move down to a smaller $16,295 subcompact Spark or up to a $22,685 midsize Malibu – the Malibu starting at about the same price as a subcompact Trax SUV.

The good news for GM, say Brinley and GM representatives, is sedan buyers increasingly are comfortable with switching to SUVs. A GM spokesman said there is no wall anymore between sedan customers willing to shop for SUVs.

Versions of the Cruze will continue to be sold in foreign markets with production in Argentina, China, Mexico and South Korea.