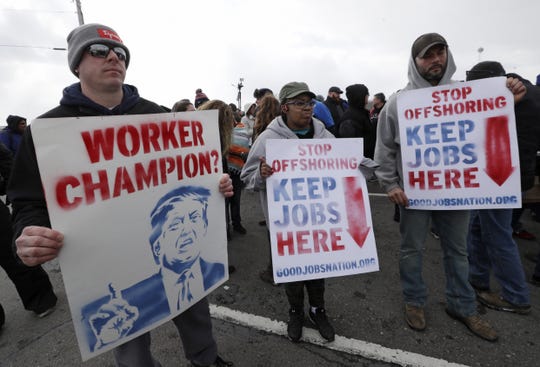 Workers protest March 6 outside GM's Lordstown, Ohio, plant, the last day of production at the factory. President Trump unleashed a Twitter storm about the plant before a Wednesday rally in Ohio. (Photo: Tony Dejak, AP)

President Donald Trump is increasing pressure on General Motors Co. and the United Auto Workers to re-open Lordstown Assembly in Northeast Ohio days before the president is expected to make a campaign stop in the Midwestern swing state.

The president took to Twitter over the weekend and early Monday morning to repeatedly chastise the union and GM over the closure of Lordstown Assembly, which stopped production of the Chevrolet Cruze earlier this month. Lordstown is one of four U.S. plants whose futures will be decided later this year during a re-negotiation of the UAW-GM National Contract.

"General Motors and the UAW are going to start 'talks' in September/October. Why wait, start them now!," Trump tweeted Monday morning. "I want jobs to stay in the U.S.A. and want Lordstown (Ohio), in one of the best economies in our history, opened or sold to a company who will open it up fast!"

The president is scheduled Wednesday to make a re-election campaign stop at the Lima Army Tank Plant in northwestern Ohio.

The UAW's contracts with GM, Ford Motor Co. and Fiat Chrysler Automobiles NV expire on Sept. 14, and bargaining usually ramps up by Labor Day with a formal start to "talks" usually taking place in June or July. The union kicked off the bargaining season last week at the Special Convention, where delegates and international leaders gathered to set the agenda for 2019 negotiations.

"You can't really bully the union or (GM) into doing things that they wouldn’t already do," said Kristin Dziczek, vice president of Ann Arbor-based Center for Automotive Research. "The relationship between the UAW and GM is what it is. Everything else is outside noise, and it doesn't really matter what Trump says, what a governor says — GM and the UAW are the only two groups in the bargaining room."

But in a series of Tweets on Sunday, the president turned some of his criticism to the UAW and Local 1112 President David Green, who appeared over the weekend on a Fox News segment on Lordstown and Trump. Trump hurled a similar Twitter attack at former United Steelworkers Local 1999 president Chuck Jones in 2016 after the union leader criticized Trump's then-deal with Carrier Corp.

Green responded to the president's Sunday tweet shortly after the UAW sent a Tweet thanking Trump for "fighting alongside the UAW against GM."

"As Mary Barra has said, GM plans to discuss our fate with the UAW in the fall and we are focused on getting a new product in Lordstown," Green said in a statement distributed by the Drive It Home campaign, which Local 1112 has used to pressure and prod GM since its Nov. 26 restructuring announcement. "Folks here in the Mahoning Valley are True Blue, hard working, loyal, dedicated and ready to help General Motors and this country build the cars and trucks of the future."

After a Sunday phone call with GM CEO Mary Barra, Trump tweeted again to indicate that the GM chief executive "blamed the UAW union" for the indefinite idling of Lordstown Assembly.

GM, which did not comment specifically on the conversation between Barra and Trump, appeared to refute the claim that Barra blamed the UAW.

"To be clear, under the terms of the UAW-GM National Agreement, the ultimate future of the unallocated plants will be resolved between GM and the UAW," GM said in a Sunday statement. "We remain open to talking with all affected stakeholders, but our main focus remains on our employees and offering them jobs in our plants where we have growth opportunities."

GM's planned plant actions this year are part of a larger restructuring effort designed to save cash and divert capital to expensive electrification, autonomy and mobility endeavors. For Lordstown, that means stopping production of slow-selling sedans like the Cruze — the only product that's been built at the Ohio plant since 2010.

With Lordstown leading off the months-long process of GM's U.S. production stops, the reality in Ohio's former manufacturing stronghold doesn't reflect what Trump promised on the campaign trail and early in his presidency.  At a 2017 rally in nearby Youngstown, Ohio, Trump told locals to keep their houses because the factory jobs were "all coming back."

But GM workers are already leaving as the automaker offers transfer opportunities to impacted workers in Ohio, Michigan and Maryland. Some 370 Lordstown workers had taken transfers prior to the plant's idling, with most landing at GM's plant in Spring Hill, Tenn. A handful have also taken forced transfers to Wentzville, Missouri.

GM, which is required by its agreement with the UAW to offer the plant transfer opportunities, said Sunday it has placed some 1,000 workers from the two assembly plants and two transmission plants at other GM factory locations.