SAIC Motor Corp. expects annual sales to fall for the first time in at least 14 years as China’s biggest automaker battles through a slump in demand roiling the world’s largest car market, according to people familiar with the matter.

The Shanghai-based company, Volkswagen AG and General Motors Co.’s biggest auto-making partner in China, projects 2019 sales will fall about 7%, said the people, who asked not to be identified because the information hasn’t been made public. The new target of 6.54 million is about 8% below SAIC’s public forecast for a slight increase in sales and would represent the first full-year drop on record, based on data compiled by Bloomberg back to 2006. 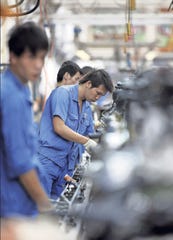 At SAIC’s venture with VW, sales are expected to fall by about 3% to 2 million units and deliveries at SAIC General Motors Corp. are projected to slide by almost 8% to 1.82 million vehicles, according to one of the people. The figures would represent the first full-year drop for the VW venture and the second-straight annual decline for the GM one, according to data compiled by Bloomberg.

The projections are the latest signs of deterioration in the global car market, as shifts in technology and weakening economic growth give consumers fewer reasons to go to the showroom, whether it be in China, the U.S. or Europe. The slump is prompting traditional automakers to fight back, by slashing jobs, pursuing mergers, and plowing billions of dollars into electric and self-driving vehicles.

A representative for SAIC said that if the overall market slides this year, the company plans to sustain its market share. Representatives for GM and the SAIC-VW venture declined to comment.

In China, consumers bought more cars in June — the first increase in a year — but those gains were largely inflated by heavy discounts to clear inventory, indicating the trend won’t last. Deliveries to dealerships continued to fall. The state-backed China Association of Automobile Manufacturers is forecasting a second straight year of declines in the country’s passenger-car market, while researcher LMC Automotive last month predicted a 5% drop. GM representatives declined to comment on forward-looking figures.

Adding to the woes in China are continued trade frictions with the U.S. and the advent of tougher emissions standards.

SAIC reported this month a 17% drop in first-half sales and said it saw declines across its various ventures. The company has offered buyers incentives of as much as 50% over the past few months to clear inventory of cars that don’t meet stricter emissions standards, according to local media reports. Eighteen provinces and regions — which together account for most of China’s car sales — began requiring vehicles to meet the new criteria from July 1.