With the UAW rejecting another "comprehensive proposal" from GM on Tuesday, the national walkout continues with increasingly widespread repercussions

Detroit — Amid fresh evidence of contracting U.S. manufacturing nationwide, the United Auto Workers strike against General Motors Co. could be sending Michigan's economy into a decline for the first time since 2010.

“When you enter the third lost week of production, all your workers have lost a full paycheck, and they’re looking at losing a second check," said Patrick Anderson, CEO of the East Lansing-based Anderson Economic Group. "It becomes a very serious matter when you go into a third week, and one that could push Michigan into a one-state recession.” 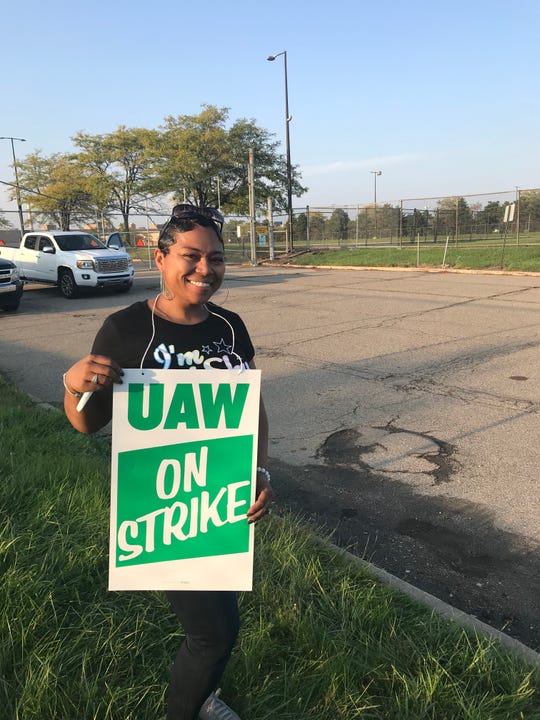 Kimberly Johnson, 39, a Detroit-Hamtramck employee, is starting to feel the financial impact of being on strike. She remains supportive of United Auto Workers leaders as they negotiate with General Motors Co. amid a national strike. (Photo: Kalea Hall/The Detroit News)

GM suppliers and auto industry workers have lost tens of millions of dollars in earnings since the strike began Sept. 16, and the state of Michigan has lost millions in income taxes alone from the 17,000 workers striking Michigan plants, the economic consulting firm estimates. The strike negatively will affect the state economy through the end of the year and limit holiday shopping, Anderson said.

With the UAW rejecting another "comprehensive proposal" from GM on Tuesday, the national walkout continues with increasingly widespread repercussions. They range from the potential for layoffs at a family-owned convenience store in Hamtramck to dealerships short of parts to fix GM vehicles already on the road. A decline in state tax revenue is intensifying as a heated budget battle is underway. And there are signs the revolt is wearing on GM picketers, too.

More: UAW strikers prepare for the worst, hope for the best: 'There will be some hardships'

More: Body-shop parts in short supply at GM dealers because of strike

“People are tired, and a lot of people are ready to go back to work,” said Kimberly Johnson, a strike captain for Local 22 at Detroit-Hamtramck Assembly. Johnson, 39, of Detroit has five children at home she has to support on $250-per-week strike pay instead of her approximately $760 in wages she earns after working for the automaker three years. "It's a little stressful because bills are not being paid."

The strike by 46,000 UAW-GM members across the country comes as U.S. manufacturing experiences its second consecutive month of contraction. The Purchasing Managers' Index from the Institute for Supply Management was 47.8% in September, the lowest since June 2009. An index below 50% signals a shrinking industry.

"There are many reasons for that; international manufacturing is cooling in Europe and Asia, as well," said Robert Dye, Comerica Inc.'s chief economist. "I think (the strike) could compound some of that discomfort."

With auto jobs concentrated in Southeast Michigan, the state becomes vulnerable to the industry during difficult times, Anderson said: “They’re all in the same neighborhood. That’s not a happy neighborhood.”

The Lumpkin Market in Hamtramck is in the neighborhood of GM's Detroit-Hamtramck Assembly Plant. It typically sees traffic when employees at the plant straddling the border between the two cities arrive for or leave a shift. 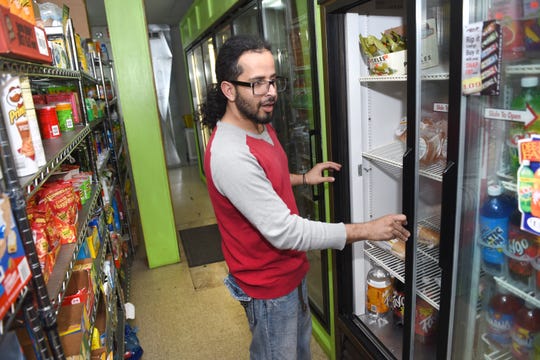 Samir Afeed, manager of Lumpkin Market in Hamtramck, checks the inventory of deli style sandwiches on Monday. His main deli counter is shut down as his business has been hit hard by the UAW strike against General Motors. (Photo: Max Ortiz, The Detroit News)

"We'll probably have to cut down," Afeed said.

Afeed isn't the only one: Waleed Eysa, owner of the Hamtramck City Market up Joseph Campau Avenue from the plant, saw revenue halved for the month of September, declining from $70,000 to $37,000 as fewer GM employees stopped by, he said. If this decline in business persists, he might have to lay off two of his five employees.

"My employees make more than what I make," Eysa said. "Some months I don't make money. Now business is going down. It's not only me. My neighbors, other restaurants, they complain about it."

The strike comes at a delicate time for Michigan, Dye said. LendingTree Inc. prior to the strike had identified Michigan as the state with the highest risk for a recession in the fourth quarter. Its analysis put the probability of weak economic fundamentals in the fourth quarter of 2019 at nearly 59%, following recent months of higher unemployment and weakness in wages. The unemployment rate was 4.3% in July, up from 4% a year ago.

"The Michigan economy was showing little momentum in theory before the strike," Dye said. "Job growth has essentially come to a standstill even before the strike. A lingering strike that would cause measurable damage to businesses would certainly top those numbers and tip the overall job growth into job declines."

Repercussions of halted production have rippled through the automotive supply chain, leaving people like Timothy Bax out of a job. When the strike began Sept. 16, the 31-year-old Lansing resident temporarily was laid off from the assembly line making taillights for Chevrolet Camaros at the Woodbridge Group's Lansing facility. He is a UAW member but won't benefit directly from the negotiated deal with GM. Bax is looking for a new job.

"I'm pretty much running on nothing," said Bax, who is now on unemployment and supporting his and his girlfriend's young daughters. "I'm not on track with my bills right now. There are three bills coming that I simply don't have the money for. I have to pay rent first. It's a downward slope."

Michigan felt similar repercussions during GM’s bankruptcy a decade ago. The losses due to the strike, however, won’t be as dire, Anderson said.

“It’s not the GM bankruptcy yet,” he said. “But what happened to GM is an eerie backdrop to this labor-management battle. One thing every GM manager knows is they’re not getting another bailout.”

Anderson originally estimated the strike would cost GM $2 million in profits per day, but it has ballooned to more than $25 million per day. Wall Street analysts this week said the two-week walkout could cost GM more than $1 billion in lost production.

The strike has not driven away customers, said Brian Tellier, general manager of Jefferson Chevrolet in Detroit. The dealership has 20% fewer vehicles on the lot than it normally does. It also has had difficulties getting parts to service vehicles.

Tellier expects if the strike extends into a fifth or sixth week, sales will decline: "That is when you really start running out of cars."

“I am optimistic they are going to get this handled,” Tellier added.

Some UAW members are confident it will, too. Gregory Frost, 65, of Detroit says he's "been saving money all along," something he's learned to do after experiencing several auto industry cycle downturns and being laid off several times, including one time for six years in the mid-1980s.

The $250 will cover his cable bill, the 42-year GM vet at Detroit-Hamtramck said. He's continuing to go out to eat, even more so now than before because he has more time.

"I would start getting more concerned if we go on to about November, December," Frost said. "If I just had about five or six years (of seniority), I'm sure I would be really more concerned then."