GM strike, day 18: UAW talks with other carmakers being held up

At Ford, 18 of 20 subcommittees have reached tentative agreements or are awaiting on a ratified contract at GM to set a pattern

GM strike, day 18: UAW talks with other carmakers being held up

Labor talks between General Motors Co. and the United Auto Workers now are holding up negotiations at other automakers — and creating some frustration among union members.

Negotiations with GM continued Thursday, but they have remained at the "main table" without a tentative agreement for more than a week. The UAW rejected a "comprehensive proposal" from GM on Monday and countered, citing disagreements over health care, wages, temporary employees and "concessionary" measures — many issues the union listed when it called for the national strike, heading in its 19th day Friday.

Meanwhile, UAW Vice President Rory Gamble said in a letter to local union leaders Thursday that negotiations with Ford Motor Co. are "progressing very well." Nearly all of the bargaining subcommittees have reached tentative agreements or are awaiting GM's contract to set a pattern for them. 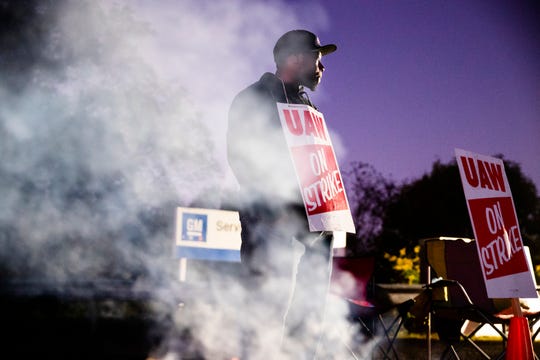 The UAW strike against GM is stretching into its 19 day on Friday, even as nearly all of the bargaining subcommittees for Ford have reached tentative agreements or are awaiting GM's contract to set a pattern for them. (Photo: Matt Rourke, AP)

The progress made, however, may put Ford in a position to reach a tentative agreement soon after UAW members ratify a contract with GM. Both Fiat Chrysler Automobiles NV and Ford's contracts that were ratified in 2015 have been extended indefinitely.

"While the UAW-GM bargaining team continue to set the pattern by negotiating first, we remain ready and able to complete our negotiations when called upon," Gamble wrote. "We are currently developing a plan to deliver a transparent and factual tentative agreement roll out so all members can make an important and much valued ratification decision."

Meoshee Edwards' job as a strike captain for the UAW at GM's Detroit-Hamtramck Assembly Plant is to check in and lead picketers, and keep spirits up.

But "everybody is getting a little tired," the 47-year-old, 23-year GM vet from Harper Woods admitted Thursday. "The last couple of nights have been chilly. When there was that torrential downpour, that was the hard part."

Edwards said her team "still has a little fight," but with little progress reported on important issues to members like health care, morale and pocketbooks are suffering, she said. Strike pay is $250 per week. For comparison, top-paid production employees earn $30.46 per hour, or about $1,218 per week.

Paul Radatz, a 34-year GM electrician at Detroit-Hamtramck, said, "You can see it's really taking a toll on" the members without the seniority he has. These are the temporary and "in-progression" permanent employees who were hired after 2007 and do not make top wages.

The difference in pay on the assembly "does create a wedge," Radatz said, adding he feels like the strike has changed some of that: “It’s made the union stronger. This contract talk is going to make or break the union. I think it’s making the union. A lot of people are seeing now that the union is standing up to General Motors to get back what we have given up.”

Jaime Rose is a temporary employee at Fort Wayne Assembly in Indiana. She went to work at GM five months ago because it had been one of the most secure jobs in her community, she said. Rose says being on strike is "way worse" financially than her $15.78 per hour wage.

"We've had to go to a food bank," the 44-year-old mom who has two teenagers living at home and supports her husband on disability. "I went and applied for food stamps. My rent was due on the first of the month; there was no way. (My landlord) was willing to wait a week. I am going to do the best that I can.

The frustration is spreading beyond GM employees, too.

"The UAW needs to move on to Chrysler or Ford ... GM wants to play games with the membership," said Jonathon Mason, 42, of Detroit, who has built F-150s pickups at Ford's Dearborn Truck Plant since 2014. "I believe they're not bargaining in good faith. I'm not seeing any progress. These guys shook hands in July. They knew what the company is offering or not offering up until the Sept. 14 deadline. They need to get their acts together."

At Ford, 18 of 20 subcommittees have reached tentative agreements or have negotiated to a point that only patterned or large economic items remain open for discussion, Gamble said. That is up from 11 subcommittees on Sept. 18. Subcommittees wrangle smaller points of the agreement except wages, health care, temporary workers, profit-sharing agreements and product allocation.

Gamble was unable to disclose items being negotiated because the process is "very fluid and is constantly in a state of flux," he said.

Ford in a statement Thursday maintained that it is focused on reaching a "fair agreement."

Gary Wolkowicz, 70, who sits on the local bargaining committee for Ford’s Dearborn Truck Plant, said he is grateful for the GM workers on strike. He doesn't want the GM negotiators to rush a contract, knowing Ford's will follow its framework.

“Their fight is our fight,” said Wolkowicz, who has joined GM employees on the picket lines on his own time. “The strike is by far the biggest topic in the plant every day. You haven’t had a strike of this magnitude in a long time. People weren’t expecting General Motors was going to take this hard of a line.”

Subcommittees also are meeting at Fiat Chrysler, though an official update from the UAW was not available Thursday. The automaker declined to comment.

Meanwhile, repercussions of the strike at GM continue to move up the supply chain, as Michigan's Unemployment Insurance Agency has processed jobless benefits for about 3,500 auto-supplier workers as of Sept. 30 because of the strike, state spokeswoman Lynda Robinson said. The maximum a claimant can receive is $362 per week.

Linamar Corp., an engine, transmission and driveline parts supplier, said Thursday in a note to investors that "the resultant decline in GM orders are currently estimated to impact Linamar earnings at a rate of up to" $750,000 per day of the strike.

The Ontario-based company has 35 manufacturing facilities in North America, though none in Michigan. A phone call was not returned on Thursday.

In Flint, UAW Local 659 confirmed Thursday that 625 Lear Corp. employees have been laid off because of the strike. The Southfield-based GM supplier said Wednesday its UAW-represented employees “at impacted facilities are unable to work due to lack of production volume," but didn't say how many workers had been furloughed.

GM itself has had to idle or reduce work at five assembly, engine and propulsion plants in Mexico, Ohio and Ontario because of the strike. Those work stoppages have affected nearly 10,000 non-UAW employees.

Union bargainers rejected Monday's offer because it took money from bonuses and other payouts to fund newly uncapped profit-sharing, and it would take temporary workers three years to get a permanent job, a person briefed on the negotiations told the Associated Press.

Other specifications were similar to GM's final offer to the UAW prior to the now-expired contract deadline on Sept. 14: wage increases or lump-sum payments offered in all four years to UAW members hired before 2007, an $8,000 ratification bonus, product allocation to Detroit-Hamtramck, and a new battery cell manufacturing facility with a joint venture in northeast Ohio's Mahoning Valley, another person briefed on the talks told AP. The person, who also didn’t want to be identified because the talks are confidential, did not know the status of other provisions that since have been discussed.

It is unclear if a tentative agreement immediately would send UAW members back to work. Members could remain off the job for several more days if a subcouncil of the bargaining committee and local union leaders decides to wait to end the national strike until after UAW members ratify the contract. The walkout already is the longest national strike against GM since 1970, which was 67 days.