As they wait for a tentative agreement with GM, UAW negotiators for Fiat Chrysler and Ford say most issues in those talks have been settled

Bargainers for General Motors Co. and the striking United Auto Workers are making "good progress" at the main negotiating table on health care and a path forward for temporary workers, UAW Vice President Terry Dittes signaled in a letter Friday.

"We still have several of your proposals outstanding and unsettled like wages, job security, skilled trades and pension," he continued.

The message on the 19th day of the nationwide walkout came as his counterparts heading the union's Ford Motor Co. and Fiat Chrysler Automobiles departments say they're ready to take over once GM and UAW reach a tentative agreement.

The UAW-FCA Bargaining Committee continues to meet daily with the company, and "some of the committees are close to completing to the point where the only issues left are economic or patterned that will be resolved once the UAW-GM negotiations are settled," UAW Vice President Cindy Estrada wrote in a letter to local union leaders Friday. "Our current goal is to have all your non-economic and non-institutional demands resolved before our turn to settle comes."

Despite progress in labor talks at Fiat Chrysler and Ford, the UAW remains committed to reaching a deal with GM first to set a pattern for the other two automakers of the Detroit Three to follow — a key reason UAW President Gary Jones is present at the "main table" talks despite being implicated in the continuing federal investigation into union corruption.

"Negotiating agreements as large and complex as ours takes time and the process has many ups and downs," said Estrada, director of the UAW's FCA department. "While the UAW Negotiating Team at GM is leading the bargaining, I would like to commend your elected UAW-FCA National Negotiators for their focus and hard work negotiating your demands."

In a statement Friday, Fiat Chrysler said: "Bargaining between FCA and the UAW continues with the goal of reaching an agreement that will allow us to continue investing in our future while creating opportunities for our employees, their families and the communities where we live and work." 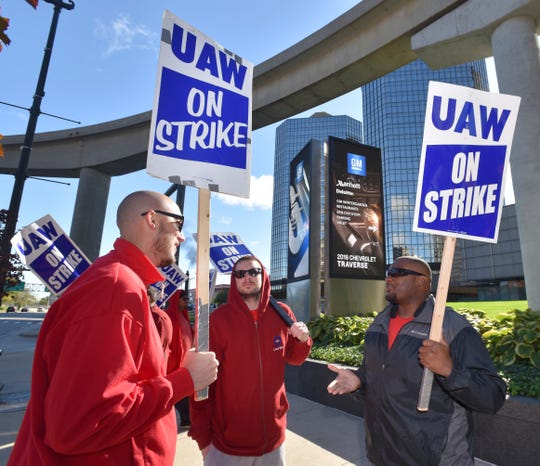 Eighteen of Ford's 20 subcommittees now have tentative agreements or have reached a point in their negotiations in which they need detail from GM's contract to set the pattern, the union's Ford department director, Rory Gamble, said in a letter Thursday. That is up from 11 subcommittees on Sept. 18.

GM and the UAW contract negotiations restarted Friday morning, as the national strike against the Detroit automaker persisted into its 19th day. Unsettled issues such as health care, wages and temporary workers have remained at the "main table" for more than a week and were many of the same the UAW identified when it called for the strike on Sept. 15. Negotiations halted about 7 p.m. Friday and are expected to resume Saturday morning, day 20 of the strike.

Meanwhile, repercussions of the strike at GM continue to move up the supply chain. Michigan's Unemployment Insurance Agency has processed jobless benefits for about 3,500 auto-supplier workers as of Sept. 30 because of the strike, state spokeswoman Lynda Robinson said. The maximum a claimant can receive is $362 per week.

Although the United States added 136,000 jobs in the month of September, sending the unemployment rate to its lowest in 50 years, the manufacturing sector cut 2,000 jobs in September, according to the jobs report released Friday. Some economic indexes suggest manufacturing already is entering a recession.

The week ending Sept. 28 saw an increase of about 4,000 initial unemployment claims nationwide over the prior week — and the strike contributed to that increase as suppliers stop production, Robert Dye, Comerica Inc.'s chief economist, said in a note Friday.

The latest on UAW negotiations: @FiatChrysler_NA appears to be ready to strike a deal, dependent on how the @GM strike/deal goes. https://t.co/iSL1Y8uJoppic.twitter.com/Tcxg9QHSdl

GM itself could be out $660 million in profits if the strike persists through Sunday, the East Lansing-based Anderson Economic Group estimates. Wall Street analysts estimate the effect could be far greater — even $1 billion after the strike's first two weeks.

GM has had to idle or reduce work at five assembly, engine and propulsion plants in Mexico, Ohio and Ontario because of the strike. Those work stoppages have affected nearly 10,000 non-UAW employees.

Union bargainers rejected and countered an offer Monday from the automaker because it took money from bonuses and other payouts to fund newly uncapped profit-sharing, and it would take temporary workers three years to get a permanent job, a person briefed on the negotiations told the Associated Press.

Other specifications were similar to GM's final offer to the UAW prior to the now-expired contract deadline on Sept. 14: wage increases or lump-sum payments offered in all four years to UAW members hired before 2007, an $8,000 ratification bonus, product allocation to Detroit-Hamtramck, and a new battery cell manufacturing facility with a joint venture in northeast Ohio's Mahoning Valley, another person briefed on the talks told AP. The person, who also didn’t want to be identified because the talks are confidential, did not know the status of other provisions that since have been discussed.

It is unclear if a tentative agreement immediately would send UAW members back to work. Members could remain off the job for several more days if a subcouncil of the bargaining committee and local union leaders decides to wait to end the national strike until after UAW members ratify the contract. The walkout already is the longest national strike against GM since 1970, which was 67 days.

The strike is the UAW's first since the Great Recession and GM's bankruptcy in 2009. Now in its third week, it has left a lasting economic impact, experts have said. How much of an impact it has had is expected to be revealed in the months to come.