UAW membership relieved for a deal, ready to get back to work

UAW membership relieved for a deal, ready to get back to work

United Auto Workers members striking General Motors Co. felt a sense of relief when they heard Wednesday the union and the automaker had reached a proposed tentative agreement.

It's been 32 days since the union decided to strike the automaker at 55 U.S. facilities across 19 states, and people are ready to get back to work. Without seeing the contract details, members say they feel confident the union has negotiated the best contract it could for them and delivered what they wanted — wage increases, retained health care coverage and a pathway for temporary employees to reach seniority. 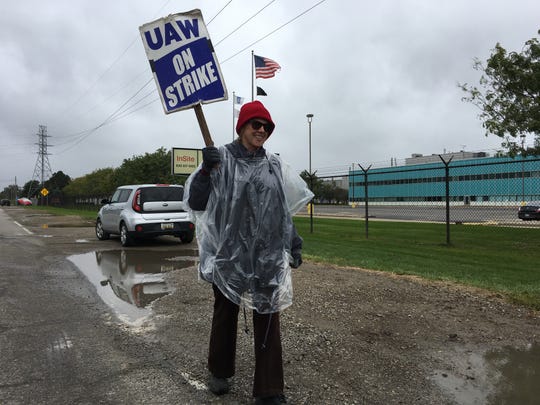 Connie Rozman, 72, who has worked at GM for 3 1/2 years, pickets outside the automaker's Ypsilanti facility on Wednesday, Oct. 16, 2019. (Photo: George Hunter / The Detroit News)

"With the bargaining team we had, they got us a deal that the membership would definitely ratify," said David Parnell Jr., a three-year GM employee who works at Flint Assembly. "Our negotiation team listened to our membership before they sat at the table."

That listening may help ensure ratification by its nearly 49,000 GM members. This negotiation process was more of a bottom-up approach than others, with rank-and-file members conveying their contract desires to union leadership. "And that bodes well for them getting the contract ratified," explained Marick Masters, business professor and former director of labor studies at Wayne State University.

More: What to know about the UAW's agreement with General Motors

On a gray, cold and rainy Wednesday morning, word that a proposed tentative agreement had been reached was a tonic for the spirits of UAW members picketing outside of the Lake Orion Assembly plant.

“We’re hoping for some job security,” said Kathy Edenburn, of Millington, a nine-year GM employee who works production on the door line. “They say they have gains and yes, we all want that, but gains aren’t any good to you if you don’t have job.”

Edenburn's concern: temporary workers who make less than her and others. The starting wage for non-permanent employees at GM is $15.78 per hour and top-paid production employees earn $30.46. “I know they have to pay their dues but I want them to get all the benefits the rest of us have,” she said.

Support from community members and other UAW locals that don't represent GM employees has kept GM UAW members going. Chris Eubanks, a 22-year UAW member, said workers were grateful for the public support they have received during the last month including pizza and taco deliveries.

“They better have a good contract — we’ve been off too long for anything less,” said Eubanks, of Holly, a team leader in the trim department at Lake Orion.

Kevin Hodder, of Caro, dropped another log in a burn barrel being used to warm picketers as they walked the line at Lake Orion where temperatures dipped to the low 40s on Wednesday.

“I want to hear some good news,” sniffed Hodder, a team leader on the door line at Lake Orion with eight years on the job. “The best news would be being told we are going back to work. Now.”

LaVerne Love and Gwenetta Bingham, employees at the GM processing center in Ypsilanti, both started working at GM as temps on Oct. 15, 2007. They spent their 12th anniversary at the company, and the day after, standing on the picket line. They met on the job and said they’ve since become friends.

"It’s important we look out for the temps," Bingham said.

Love is hopeful about what's in the tentative agreement stating: "I don’t think our leadership would agree to it if it wasn’t a good deal."

But the deal may not be good news for everyone and every plant. The word that a tentative agreement came started the final countdown for the Lordstown Assembly Complex. Its fate as a GM facility after 53 years of building Chevrolet vehicles will be known officially when details of the deal are released to local presidents and chairpersons at a union meeting scheduled for Thursday morning in Detroit.

"We always have hope until we find out there isn’t any," Lordstown Local 1112 President Tim O'Hara said.

Since last November when GM decided it would halt production at four U.S. plants including, Local 1112 members have "had a knot in our stomach waiting for this negotiations," said O'Hara, who worked at the plant for 41 years until he retired in July 2018. The agreement is expected to confirm the wind-down of three plants including Lordstown.

Scott Ferguson, 65, is probably a year from retirement after 46 years with GM. But in the hours after news broke regarding the tentative agreement that would end a five week long strike, Ferguson said the deal was less about himself and those of similar tenure and more about those workers who are on the front end of their careers.

“I’ll be fine either way,” the Dearborn resident said while on the line at the Detroit-Hamtramck Assembly Plant. “This strike wasn’t just about us, it was about the middle class as a whole.”

Ferguson was on the management track at Kroger when, at 19, he took a job with GM. In 1973 that required a slight pay cut. But over the years Ferguson said his earnings would outpace what he would have likely made had he stayed in the grocery business.

Even so, being out of work for more than a month pinched his finances a bit. Last week, Ferguson said, he had to dip into his savings to pay bills, which were larger than $250 in strike pay would cover.

“I see our managers sometimes” driving near the plant, Ferguson said. “I think even they realize it’s time to get back to work.”