Plant closures give GM flexibility to make $7.7B investment

Plant closures give GM flexibility to make $7.7B investment 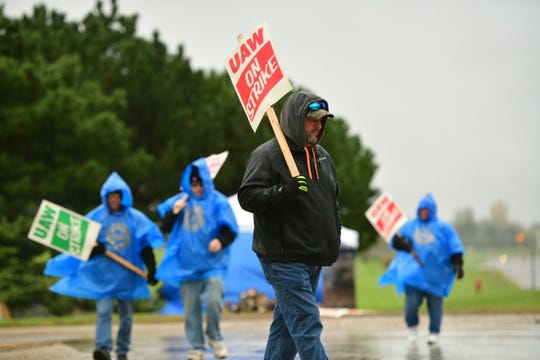 The tentative deal between General Motors Co. and the United Auto Workers provides some certainty for the Detroit automaker facing trade wars, an industry downturn and a shakeup from future technology, experts say.

“On the face of it," Stephen Brown, a senior director at Fitch Ratings Inc., said in a note Friday that "the tentative agreement between the UAW and GM appears to maintain much of the company’s expected operating flexibility while providing more certainty around future labor costs in North America."

One possible indication of that flexibility is embedded in the tentative UAW-GM agreement: GM plans to invest $3 billion in Detroit-Hamtramck Assembly and another $4.7 billion in other U.S. plants even as the UAW's national strike against GM is expected to continue for another week.

That would put the work stoppage at 40 days — the longest national strike against GM since 1970. Members on Saturday will begin voting on the proposed contract, and the UAW wants ballot totals from local unions by 4 p.m. Oct. 25.

“I am grateful that it appears that there’s been some agreement here, and I am hopeful that it’s ratified,” Gov. Gretchen Whitmer said Friday during a National Governors Association meeting in Detroit. "Obviously any additional investment in Michigan is a wonderful thing."

GM's operations flexibility would come from closures at three U.S. plants and associated reductions in fixed costs, excess plant capacity and engineering expense. Baltimore Operations in Maryland, Lordstown Assembly in northeast Ohio and Warren Transmission in southeast Michigan were not spared in the national contract talks.

The tentative agreement, however, saves one of the plants that GM slated to close. Investment at Detroit-Hamtramck would create 2,225 new jobs at the Detroit plant when producing the electric vehicles as well as battery modules at full volume. Modules consist of several battery cells, and several modules make a battery pack that goes into an electric drivetrain. GM has made modules for the electric Chevrolet Bolt car at its facility in Brownstown Township.

But the $3 billion figure for the retooling of the plant seems high, said Sam Abuelsamid, a mobility analyst at Navigant Research, unless the company is including the costs of product development or choosing to build cells there, either of which could exceed $1 billion. GM is planning to build a battery-cell manufacturing plant in northeast Ohio's Mahoning Valley, home to Lordstown, but it is not covered under the proposed contract.

"I am having a hard time seeing where they are thinking $3 billion," Abuelsamid said. "If they're planning to build a truck there, that's a pretty significant revamp of the assembly lines there. They're going from building mostly small, midsize, front-wheel cars. Probably there's something not in (the agreement) that would elevate that expense to $3 billion."

Detroit-Hamtramck, which employs 700 people, is building the Chevrolet Impala and Cadillac CT6 sedans until January.

"I think that we really are the center of mobility, and we are going to continue to remain that way," Whitmer said. "But we have to be shrewd about ensuring that these investments happen … We’re going to work to make sure every dollar that GM wants to invest happens right here in Michigan."

GM has not yet made a request for tax incentives on the project, Whitmer said. "Any tax policy has to be driven by what it means for the people of Michigan."

Also under the agreement, the Warren Technical Center's pre-production operations would receive a new electric vehicle program, a $200 million investment that would retain 75 jobs.

"We certainly hope that the agreement can happen,” Tennessee Gov. Bill Lee, a Republican, said at the governors' convention. The Spring Hill plant employs 3,700 employees.

Wentzville Assembly in Missouri would receive a $1.5 billion investment to build next-generation midsize pickup trucks, which would retain 2,000 jobs. The plant currently employs 4,320 people and builds the Chevrolet Colorado and GMC Canyon midsize trucks and the Chevrolet Express and GMC Savana full-size vans.

Meanwhile, at GM's Oshawa Assembly Plant in Ontario, 700 employees on Friday returned to building Chevrolet Impala sedans, spokesman Dan Flores said. GM temporarily had laid off the workers on Sept. 20 because some components were unavailable due to the U.S. walkout. They are part of the nearly 10,000 non-UAW employees affected by the strike.

The 1,300 employees on Oshawa's truck line who had been laid off even before the car line went down have not returned. The plant builds the previous-generation Chevrolet Silverado and midsize GMC Sierra.

Employees at other affected GM plants also have not returned to work. That includes the joint-venture DMax Ltd. plant in Moraine, Ohio, that produces truck engines for Flint Assembly; engine lines at St. Catharines Propulsion Plant in Ontario; and the engine and truck assembly lines at the Silao, Mexico, complex.

For the UAW-GM tentative agreement to be ratified, a majority of voting members must support the deal that promises permanent jobs for temporary employees, record ratification bonuses and the elimination of a $12,000 cap on profit sharing.

The proposed contract would give 3% base-wage increases in the second and fourth years of the contract and would pay 4% lump-sum bonuses in the first and third years. A record ratification bonus of $11,000 would be paid to permanent employees, while temporary workers would receive a bonus of $4,500.

UAW leaders representing Fiat Chrysler Automobiles NV and Ford Motor Co. on Friday said their subcommittees would continue to meet until UAW President Gary Jones chooses the next company with which to bargain after GM sets the pattern.

"The rationale behind pattern bargaining is that if the employer knows the UAW is going to make competitors agree to the same overall labor economics, the employer will be more likely to agree to our demands because they company will not be placed in an uncompetitive situation," Rory Gamble, UAW vice president and director of the UAW's Ford Department, wrote in a letter to local union leaders after he said workers at the rival automakers had asked about the wait.

The UAW-GM strike isn't the only walkout the union is overseeing as it works through the negotiation process with two other companies: Aramark Corp. and Mack Trucks Inc. The UAW's 850 members employed by Aramark, which provides maintenance at five GM facilities — Hamtramck, Warren, Flint, Grand Blanc and Parma, Ohio — have been on strike since Sept. 15 and will continue to be so until a contract is ratified. A tentative agreement was reached on Thursday.