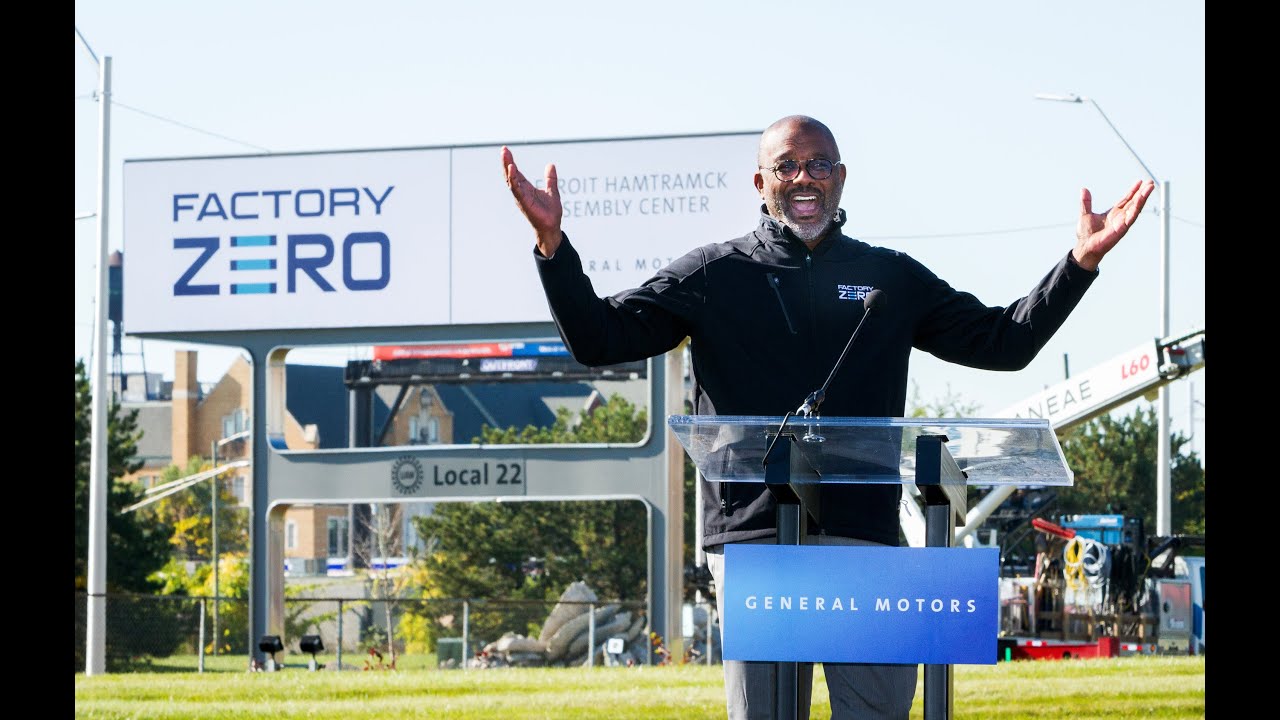 He painted a picture of a nation on the precipice of resurgence thanks to industrial innovation in green technology and argued it could all be done without increasing inflation or veering into significant debt.

"We're going to make sure that the jobs of the future end up here in Michigan, not halfway around the world," he said. "Here in Detroit, we're going to set a new pace for electric vehicles. This is not hyperbole. It's a fact."

Biden was joined by GM CEO Mary Barra, United Auto Workers President Ray Curry, Labor Secretary Marty Walsh, members of Michigan's Congressional delegation and more at the event, which launched the new Factory Zero Detroit-Hamtramck Assembly Center. It is GM's second EV plant so far within its North American footprint and is central to the company's plan to pivot from gas and diesel-powered vehicles to EVs.

Before delivering formal remarks, Biden toured the plant and took a spin in the new Hummer EV pickup. It will be produced at the plant along with other electric vehicles, including an electric Chevrolet Silverado pickup and the autonomous, electric Cruise Origin. He later called the Hummer "one hell of a vehicle" and marveled at its speed.

"Anyone want to jump in the back, or on the roof?" Biden joked with reporters and attendees. "This sucker's something else!"

During the plant tour, Biden commented on how "exciting" he found the new plant, said GM is helping to "change everything" and noted jobs at the plant are among the "most coveted" of union positions, according to pool reports.

But the proposed $1.75 trillion climate and social safety net package Democrats hope to vote on by the end of the week would include significantly more money to spark EV adoption, including billions of dollars in funding to re-tool or build clean energy and auto manufacturing facilities and funding for up to $12,500 consumer rebates for EVs.

"We stopped. We risk losing our edge as a nation, and China and the rest of the world are catching up. Well, we're about to turn that around in a big, big way."

The Detroit-Hamtramck plant is an example of the kinds of projects the legislation may support if passed. The 36-year-old plant was earmarked for closure by GM in 2018, but instead the automaker — following a 40-day strike by the UAW in fall 2019 — decided to invest $2.2 billion here to make EVs.

The plant is now in the pre-production phase for the GMC Hummer EV pickup, which will arrive at dealerships by year's end. The Hummer SUV and electric Chevrolet Silverado will also be built here. When fully operational, the plant is supposed to employ 2,200.

Factory Zero is one of five North American plants GM has so far slated to build electric vehicles. The automaker plans to sell 1 million EVs globally by 2025 and wants to have a zero-emissions lineup by 2035.

Barra, who once was the plant manager at the factory, said she "could not have imagined the role I would play someday in charting the future of transportation."

The company is spending $35 billion in EVs and autonomous vehicles globally between 2020 and 2025 and plans to launch 30 new EV models by 2025, she said, adding the new Factory Zero will double the number of employees of the old plant.

"It sets the stage for what's to come here and at many other GM facilities in the United States that will be transformed to support the production of full-electric vehicles," she said. "I personally have never been more optimistic about our company and our industry."

UAW leaders, too, expressed optimism that the future of transportation would be built by union members. The Build Back Better Act currently includes policy that would make union organizing easier, increase penalties for labor violations and give the UAW and the Detroit Three a leg up over competitors through a $4,500 tax credit for EVs built by union workers spearheaded by Rep. Dan Kildee, D-Flint Township, and Sen. Debbie Stabenow, D-Lansing.

"There's so much more in this law," he said. "But most of all this law does something truly historic — this law is going to help rebuild the backbone of this nation."

He said the proposed Build Back Better bill would add to that by funding paid family leave, universal preschool, lower costs for some prescription drugs and expanded home care and child care help and more.

But Michigan Republicans in Congress on Wednesday slammed Biden ahead of his visit for rising inflation, supply chain shortages, the staggering cost of what they called his “Build Back Broke” climate and social policy plan. They also highlighted reports that he’s allegedly contemplating shutting down a segment of the Line 5 pipeline under the Straits of Mackinac — a charge the White House denies.

“They're trying to put a bow on top of this big pile of garbage that's happening in the economy right now,” said Rep. Bill Huizenga, R-Holland. “The simple fact is real people are being hurt.

"Whether it is in the cost of autos — which is a huge issue for us in Michigan and for me in my district with a tremendous number of suppliers. Whether it's getting washing machines and refrigerators and things like that. It is having a real impact on people.”

Rep. Tim Walberg, R-Tipton, said he's glad GM's electric vehicle production will happen at the repurposed plant in Michigan. But he added "there will probably be less employees" because it doesn't take as many people to build EVs as gas- and diesel-powered vehicles.

"So we're gonna have to find a way to make sure that the others have the opportunity to find a life calling, as it were, in another field," Walberg said.

And Rep. Lisa McClain, R-Bruce Township, ahead of the visit questioned the proposal in the Build Back Better bill that would offer $4,500 in consumer tax credits for cars made by union workers.

“Why do you only get a tax credit if it's a union-made car? What's the matter with the non-union people? Why can't we do both?” McClain said. “If we're going to give tax credits, let's give tax credits for innovation, which works, and let's stop picking winners and losers.”

Canadian officials, foreign automakers and Tesla Inc. have opposed the EV tax credit proposal. Asked about the opposition on the way to Detroit, White House spokesman Chris Meagher said Biden is doing what he promised by “rebuilding” the middle class.

“There's a long history of using tax credits to incentivize choices, and that's true here. They'll lower the cost of EVs by $12,500 for a middle-class family, they'll bolster domestic manufacturing supplies across the country, and they'll position America to out-compete the world when it comes to EVs.”

Michigan's Democratic members of Congress praised the visit and the recently passed infrastructure legislation as a pivotal moment in Michigan and the auto industry's history.

"We are living in a time in America where we can tell our children that we wrote history in America by believing in Joe Biden, believing in his vision," said Rep. Brenda Lawrence, D-Southfield, whose district includes part of the new plant.

"The more he shows the American people that these vehicles are real ... then we're helping transform the industry. Keeping the U.S. auto industry at the front of innovation and technology," she told The Detroit News. "We put the world on wheels, now we're the new state leadership on mobility. That's what he's doing, reinforcing those messages."

Biden flew from Washington to Detroit on Wednesday afternoon on Air Force One, along with most of the Democrats in Michigan's congressional delegation. U.S. Reps. Elissa Slotkin, D-Holly, and Rashida Tlaib, D-Detroit, were not part of the group.

Slotkin's office said she stayed in town to cast votes Wednesday afternoon. Tlaib was one of six Democrats in the House to vote against the bipartisan infrastructure bill this month because she objected to the bill being decoupled from a larger social spending and climate package.

Democratic Gov. Gretchen Whitmer was unable to attend the event Wednesday because of previously scheduled meetings, including with leaders of the semiconductor industry in California. She plans to meet Thursday with the Semiconductor Industry Association Board of Directors to discuss ongoing efforts to increase domestic chip production and will attend the association's annual event.

Biden landed at Detroit Metropolitan Wayne County Airport aboard Air Force One around 2:20 p.m., where he briefly spoke with Lt. Gov. Garlin Gilchrist II on the tarmac. About an hour later, he arrived at the GM complex.

Despite its detailed EV plans, General Motors has ground to make up with Wall Street investors who still see Tesla Inc. and electric startups as the more valuable investments. Executives and experts expect that to change as GM gets more of its new EVs, powered by its proprietary Ultium batteries, on the market. GM's shares closed up 3% Wednesday.

"It wasn’t too long ago when the Big Three were somewhat outshadowed by startups dominating the EV news cycle. But they’ve since caught up rather aggressively, particularly within the electrified pickup space, which is vital to the Detroit automakers. They cannot afford to lose ground with trucks, which are their bread and butter vehicles."