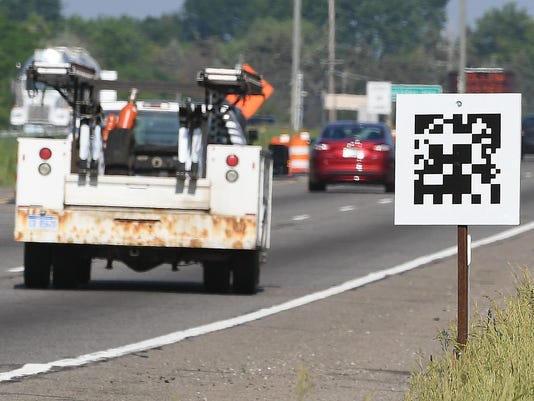 General Motors Co. is testing a safety feature in Macomb County to warn drivers that traffic signals are about to turn red.

And in what is believed to be a first “connected” construction zone in the nation, test cars on a section of Interstate 75 in Oakland County can read high-tech roadside bar codes which communicate what lanes are closed up ahead. Even the reflective strips on workers’ safety vests contain information that identifies them as people instead of traffic barrels.

Those are just three examples that make southeast Michigan a leader in developing “connected” roads and traffic signals that will “talk” directly to the next generation of cars. They are the building blocks that will eventually guide self-driving cars safely to their intended destinations with nobody at the steering wheel.

The Michigan Department of Transportation and Macomb County are two of the government units working with carmakers and auto suppliers in testing of the life-saving technology. The state has established at least 100 miles of “connected” highway corridors with roadway sensors for testing in Metro Detroit, with plans to grow to some 350 miles.

“Smart” traffic signals and sensors in the roadway on Mound at 12 Mile and 13 Mile outside the GM Tech Center in Warren can exchange radio information with Cadillac CTS test sedans equipped with vehicle-to-infrastructure capability. Macomb County installed the equipment at the intersections.

In recent demonstrations the Cadillacs received real-time traffic-signal information. The safety feature took into account the car’s speed and length of time remaining on the green light to alert the test driver he would need to stop: A warning light glowed on the infotainment screen, and the driver’s seat vibrated.

The system, which works up to 1,000 feet from a traffic light, does not brake the car. The alert can help drivers so they don’t have to stop abruptly or speed through an intersection to beat the light change. It’s one of several features GM is exploring.

“We’re just scratching the surface of V2I (vehicle-to-infrastructure) with red-light violations,” Cadillac spokesman Steve Martin said. GM is not yet offering vehicle-to-infrastructure capability on any production cars. But its 2017 Cadillac CTS can communicate with other similarly equipped CTS sedans and alert drivers in advance of hard braking and slippery roads.

Macomb County Executive Mark Hackel said the GM partnership is part of a string of public-private projects piggybacking off the county’s recent infrastructure investments. Hackel said the county has been working for about five years installing cameras and sensors at intersections to create an intelligent roadway.

That, coupled with the $13.5-million Communications and Technology Center (COMTEC) in Mount Clemens that opened in late 2013, has positioned the county to be a leader in applying vehicle-to-infrastructure developments, he said. The center brings together traffic-monitoring, weather-mapping, road-department cameras and a video wall with 40 monitors.

Hackel said county leaders are talking to automakers and suppliers on how they could use the infrastructure.

“You can pretty much leave that to the imagination,” he said. “(The automakers and suppliers) are the ones that have this imagination. They’re pretty excited about the fact that we have this infrastructure in place.”

The state of Michigan has been equipping area freeways with roadside units to enable connected cars to communicate with roadways.

MDOT Director Kirk Steudle said the state continues to grow partnerships with automakers and suppliers to advance research in robotic cars and vehicle-to-infrastructure communication. He is encouraged by estimates that say the technology could eliminate 80 percent of fatal accidents.

This fall, the U.S. Army’s Tank Automotive Research, Development and Engineering Center (TARDEC) will expand its self-driving truck convoy project along Interstate 69. A year ago near Imlay City it tested a convoy of Army trucks that could communicate with each other to automatically brake, accelerate and stay in the lane. Testing now will be done near Port Huron, across the Blue Water Bridge and into Ontario.

That’s not a QR code

The 2-D signs are provided by 3M Co., which says it is partnering with multiple automakers and suppliers who are testing various systems in the work zone. Tammy Meehan, global portfolio manager for 3M Connected Roads, declined to identify the companies due to confidentiality agreements.

Information that could be loaded onto the 2-D signs include GPS coordinates to pinpoint location; warn vehicles of an upcoming work zone; and estimate the wait time to get through the zone. “It can provide a whole lot more information than just ‘road work ahead,’ ” Meehan said.

GM confirmed it is testing a feature in the I-75 zone that would alert drivers about work zones and lane closures. The automaker is doing that testing in conjunction with the Crash Avoidance Metrics Partnership, a consortium of automakers.

It is in that construction zone that 3M is providing road-worker vests with Scotchlite reflective material to help connected cars “better identify the person as a person,” Meehan said. The strips on the vest include information that only connected cars can detect and decode.

“There’s a lot of activity in that work zone: there’s barrels, there’s cones, there’s workers with vests, and all of it’s reflective,” Meehan said. “So from 3M’s perspective, it’s really about detecting and classifying that worker as a worker, as a person, as opposed to a barrel.”

Michigan isn’t the only state planning and laying smart, connected roadways. Several states, including Ohio, have areas available for testing.

Ohio is investing $15 million to create the U.S. 33 Smart Mobility Corridor, a 35-mile stretch in central Ohio with high-capacity fiber-optic cables and wireless sensors for connected and autonomous vehicle testing. It’s also looking to add connected capability along parts of Interstate 270 around the Columbus and on Interstate 90 east of Cleveland to the Pennsylvania state line.

And the Ohio Turnpike, which has 241 miles of fiber-optic cables, this fall will install connected roadside units along 60 miles south of Cleveland between Elyria and Akron; 40 maintenance vehicles will be outfitted to “talk” to the roadway. Ohio Turnpike Executive Director Randy Cole said the testing will help it gain information to help prevent crashes and notify drivers of upcoming weather or road condition changes.