Electric cars may be biggest disruptor since iPhone

Electric cars may be biggest disruptor since iPhone 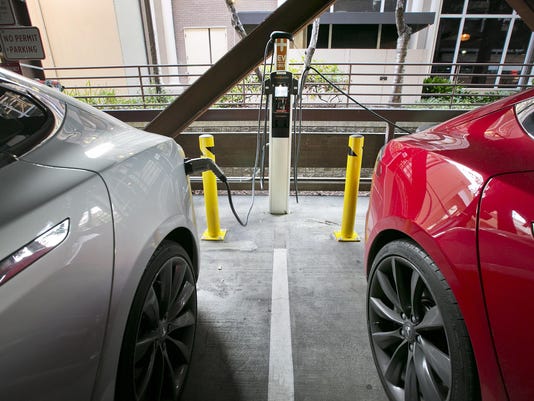 Most forecasters see the shift away from oil in transport amid slow improvements in the cost and capacity of batteries.(Photo: LiPo Ching / TNS)

It’s been 10 years since Apple Inc. unleashed a surge of innovation that upended the mobile phone industry. Electric cars, with a little help from ride-hailing and self-driving technology, could be about to pull the same trick on Big Oil.

The rise of Tesla Inc. and its rivals could be turbocharged by complementary services from Uber Technologies Inc. and Alphabet Inc.’s Waymo unit, just as the iPhone rode the app economy and fast mobile internet to decimate mobile phone giants like Nokia Oyj.

The culmination of these technologies autonomous electric cars available on demand could transform how people travel and confound predictions that battery-powered vehicles will have a limited impact on oil demand in the coming decades.

“Electric cars on their own may not add up to much,” David Eyton, head of technology at London-based oil giant BP Plc, said in an interview. “But when you add in car sharing, ride pooling, the numbers can get significantly greater.”

Most forecasters see the shift away from oil in transport as an incremental process guided by slow improvements in the cost and capacity of batteries and progressive tightening of emissions standards. But big economic shifts are rarely that straightforward, said Tim Harford, the economist behind a book and BBC radio series on historic innovations that disrupted the economy.

“These things are a lot more complicated,” he said. Rather than electric motors gradually replacing internal combustion engines within the existing model, there’s probably going to be “some degree of systemic change.”

That’s what happened 10 years ago. The iPhone didn’t just offer people a new way to make phone calls; it created an entirely new economy for multibillion-dollar companies like Angry Birds maker Rovio Entertainment Oy or WhatsApp Inc. The fundamental nature of the mobile phone business changed and incumbents like Nokia and BlackBerry Ltd. were replaced by Apple and makers of Android handsets like Samsung Electronics Co. Ltd.

Today, as Elon Musk’s Tesla and established automakers like General Motors Co. are striving to make their electric cars desirable consumer products, companies like Uber and Lyft Inc. are turning transport into an on-demand service and Waymo is testing fully autonomous vehicles on the streets of California and Arizona.

Combine all three, for example through an Alphabet investment in Lyft, and you have a new model of transport as a service that would be a cheap and compelling alternative to traditional car ownership, according to RethinkX, a think tank that analyzes technology-driven disruption.

One key advantage of electric cars is the lack of mechanical complexity,which makes them more suitable for the heavy use allowed by driverless technology, Francesco Starace, chief executive officer of Enel SpA, Italy’s largest utility, said in an interview. “I don’t see driverless being pushed into internal combustion engine” vehicles, he said.

“Competitiveness very much depends on the utilization of the car,” Laszlo Varro, chief economist at the International Energy Agency, said in an interview. The average Uber vehicle covers a third more distance than the typical middle-class family car in Europe, amplifying the benefit of lower running costs to the point that “the oil price at which it makes sense to switch to electric is $30 per barrel lower,” he said.

The total cost of ownership of electric and oil-fueled vehicles will reach parity in 2020 for shared-mobility fleets, five years earlier than for individually-owned vehicles, according to Bloomberg New Energy Finance.

The transition to fully autonomous fleets may not match the speed of the smartphone revolution because of the many regulatory, legal, ethical and behavioral hurdles. Self-driving technology should become available in the 2020s, but won’t be widely adopted until 2030, BNEF says.

The sheer breadth of the potential disruption makes it hard to predict what will happen. When Steve Jobs unveiled the iPhone, few people anticipated that it meant trouble for makers of everything from cameras to chewing gum.

“The smartphone and its apps made new business models possible,” said Tony Seba, a Stanford University economist and one of the founders of RethinkX. “The mix of sharing, electric and driverless cars could disrupt everything from parking to insurance, oil demand and retail.”