‘At the end of the day you still have to make customers happy,’ she said in Washington 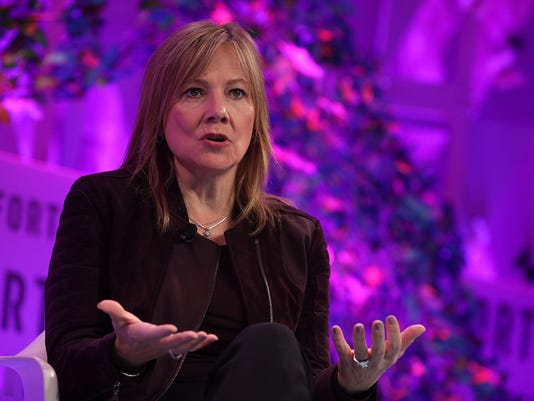 Washington — General Motors Co. CEO Mary Barra said Tuesday that Chinese officials should consider whether there is sufficient demand for electric cars before they move to ban gasoline and diesel engines.

Speaking at a conference in Washington honoring her for being named number one on Fortune Magazine’s Most Powerful Women list, Barra said GM is “very committed to an all-electric future.” But she said drivers still have to be persuaded to want electric cars, even in places where the government is mandating their use.

“Clearly we believe that the Chinese market will have the highest electric vehicles most quickly because of the regulatory environment,” she said. “I think the point I was trying to make, and it kind of got spun into something a little different, is at the end of the day you still have to make customers happy and you have to fill their needs.

“We’ve encouraged the Chinese government to work with us and work with the industry to make sure we’re creating the excitement and demand for electric vehicles as opposed to it just being mandated,” Barra added.

Regulators in China and France have moved to enact bans on gas and diesel engines in a bid to boost the use of electric vehicles in recent weeks — and California is looking into following suit domestically.

Barra said she does not think the moves are politically motivated, although they come at a time when critics of the Trump administration’s efforts to roll back climate regulations that were enacted by former President Barack Obama are looking for reasons to cheer.

“It’s looking at where the future is going and wanting to have a stronghold,” Barra said. “Every country wants to look and make sure that they have new technology that’s going to create jobs and create a very strong economy.”

GM, Detroit’s No. 1 automaker, is planning to launch two new electric vehicles in 18 months and 20 by 2023 as it looks to build upon the success of its Chevrolet Bolt, assembled its Orion Assembly Plant in Michigan.

“I really think it’s part of the solution. I think we’re getting cycles of learning and the experience to make it affordable. I think it’s going to be part of the solution, both from what customers want to drive because we look at what the customer really cares about, but also from a regulatory environment and doing the right thing for the environmental perspective.”

Barra also touted GM’s effort to develop self-driving cars by describing her experience riding in a semi-autonomous Cadillac that has the company’s “Super Cruise” technology.

Drivers experiencing the technology for themselves will be the biggest factor in increasing customer acceptance of self-driving cars, she said, predicting car buyers will still care about the branding of automakers when they are not doing the driving themselves.

“I think they are going to care about the experience. You see it in today’s ride sharing,” she said. Ride-hailing passengers have the ability to choose whether they want to carpool or ride unaccompanied in an individual vehicle.

“I think it’s going to be the experience, and there’s so much more when you think about it when you’re riding and you can be completely detached from how you’re getting from point A to point B. Giving back that time is going to be key,” she said. “With connectivity, we’re imagining quite a few things that people will be doing with that time back.”

Asked if she will always have a car to drive that is not autonomous, Barra answered “yes” — despite her enthusiasm for self-driving cars.