Students at Lawrence Technological University in Southfield are developing and testing a semi-autonomous vehicle, hoping to use it as a taxi on campus. 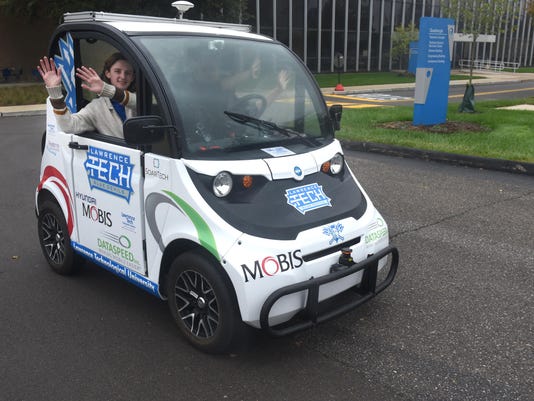 Correction: This story has been updated to correct the name of Soar Technology Inc., which was among the donors to Lawrence Technological University’s autonomous vehicle project.

Southfield — On the small campus of Lawrence Technological University, a few students are on the cusp of programming one of the nation’s first autonomous vehicles as a class project.

Already, the two-seat electric vehicle — the size of a golf cart — won an international competition last spring for the software the students developed, taking first place in a new division of the Intelligent Ground Vehicle Competition at Oakland University.

That honor attracted local investors to give the team of students funding to develop the semi-autonomous vehicle into a fully autonomous vehicle to use as a taxi next fall on the private university’s 107-acre campus.

“We are the auto capital, we should be leading the new technologies,” said Lawrence Tech computer science professor CJ Chung.

The University of Michigan soon will launch two driverless shuttles on its north campus in Ann Arbor later this fall. But those vehicles are being produced and programmed in France by the company Navya, said Susan Carney, a spokeswoman for UM’s Mcity.

“We are the auto capital, we should be leading the new technologies,” said Lawrence Tech computer science professor CJ Chung. (Photo: Max Ortiz / The Detroit News)

Meanwhile, autonomous vehicles are being launched on college campuses around the world, in places such as California, Taiwan and Singapore, Chung said. But those vehicles were developed by professional engineers, not students.

Lawrence Tech’s vehicle is known as ACTor, or Autonomous Campus Transport/Taxi, and is expected to be functioning on campus by August. It is planned to be a level-three autonomous vehicle, meaning hands can be taken off the wheel and eyes off the road.

The vehicle can do basic tasks, such as navigate short routes, halt at stop signs and detect people or other things crossing the road.

Lawrence Tech got the vehicle two weeks before the competition the school won. Six students, along with Chung and another faulty member, came together to program and submit the winning vehicle.

“Since then, we’ve rewritten a lot of the code to make it more robust and be useful as the end goal, which is a taxi to travel between buildings here on campus,” said Paul, 21. 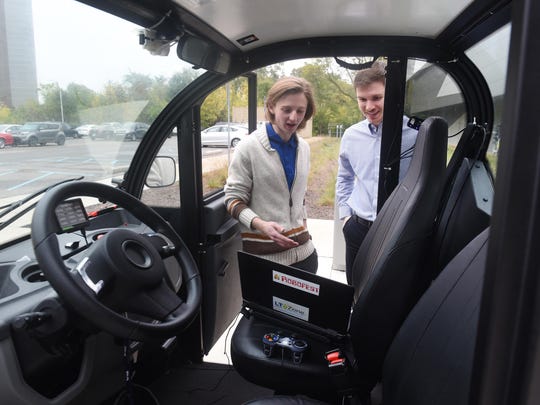 The vehicle is a Polaris GEM, a work vehicle that might be seen at a maintenance facility.

The vehicle has two major sponsors — Hyundai MOBIS, which provided $15,000 to purchase the vehicle, and a Rochester Hills engineering firm, Dataspeed, which put in the hardware, allowing the students to focus on the computer programming.

Other donors were Soar Technology Inc., which provided a LIDAR (laser-based radar) to assist the unit to find its way. Realtime Technologies Inc., a simulation technology firm, provided a cash donation.

“Once we got the vehicle, we were able to plug in the vehicle and begin working,” Paul said. “We were able to write smaller programs; some of them only handle stop sign recognition, obstacle detection. All of these things that come together to create the software that runs on this vehicle currently. All of those components help make intelligent decisions, safe decisions about the surroundings and the destination, where it needs to go.”

Paul said students want to make a campus taxi because they would like to be able to research ways for the vehicle to navigate different roadways, parking lots and students walking on campus.

Using it on campus as a taxi would be useful for people who can’t get around as easily or who would like to have an experience with an autonomous vehicle.

“That is where the future is headed,” Paul said, “and to have people experience that on a local campus is a great way to get things rolling.”

By the end of this year, an initial prototype with a level-two autonomy is expected to be ready, meaning the driver has to be prepared to take control at any time but the vehicle can otherwise drive autonomously. By the end of next year, Paul said, it will be more robust and operable anywhere on campus by someone who can get in the vehicle, press a button and ride to a location.

Mitchell Pleune, a Rochester Hills sophomore majoring in computer science, said he’s heard from students on campus who ask about the vehicle, wondering about safety and the progress of research on it.

“It’s pretty often we’ll be sitting down working on the car and someone will come up and say, ‘Is this the car that I’ve heard about?’ ” said Pleune, 19. “Word has been spreading.”