Dave Morton gave notice he’s resigning one month into the job, citing the level of scrutiny on the car maker 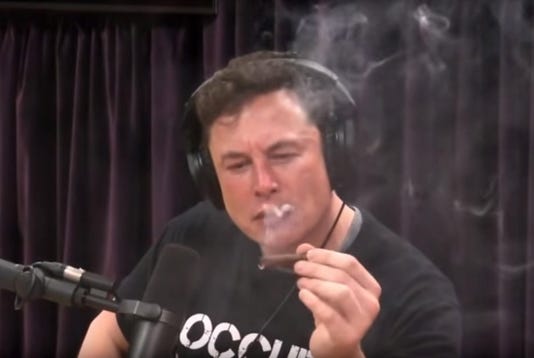 The turmoil at Tesla Inc. reached a fever pitch, as the news that two senior executives are leaving Elon Musk’s electric-car maker emerged just hours after he smoked marijuana during an hours-long interview streamed live online.

Chief Accounting Officer Dave Morton gave notice Tuesday that he was resigning less than a month into the job, according to a Friday filing. Tesla’s stock plunged, then extended declines after Gabrielle Toledano, the head of human resources who’s been on a leave of absence, told Bloomberg News that she won’t rejoin the company.

Morton, a former chief financial officer for computer-drive maker Seagate Technology Plc, joined Tesla one day before Musk tweeted that he was considering buying out some investors at $420 a share and taking the company private. The CEO abandoned that effort 17 days later, and in the process drew a subpoena from the Securities and Exchange Commission and a series of lawsuits alleging market manipulation.

“Since I joined Tesla on August 6th, the level of public attention placed on the company, as well as the pace within the company, have exceeded my expectations,” Morton said in the filing. “This caused me to reconsider my future. I want to be clear that I believe strongly in Tesla, its mission, and its future prospects, and I have no disagreements with Tesla’s leadership or its financial reporting.”

Tesla shares fell as much as 10 percent, the steepest intraday drop since June 2016, and were down 5 percent to $267.10 just before noon in New York. The company’s 5.3 percent bonds declined as much as 4 cents to 81.75 cents on the dollar, a new low, according to Trace bond price data.

Musk, 47, sipped whiskey during a more than 21/2-hour podcast with comedian Joe Rogan late Thursday that touched on everything from flame throwers and artificial intelligence to the end of the universe. About two hours into “The Joe Rogan Experience” podcast, which can be seen on YouTube, Musk inhales from what the host says is a combined marijuana-tobacco joint, which Rogan notes is legal. Rogan passes the joint to Musk, who also takes a sip of whiskey.

Shortly after smoking, Musk looks at his phone and laughs, telling Rogan he was getting texts from friends asking why he was smoking weed during the interview. Later Musk says he doesn’t notice any effect from the joint, which he claims he rarely smokes.

Tesla has long struggled with high turnover among its senior executive ranks, and its finance team in particular has gone through significant tumult lately. In the first quarter of this year, the company lost Morton’s predecessor, Eric Branderiz, and Susan Repo, who was treasurer and vice president of finance. CFO Deepak Ahuja retired in 2015, only to return in 2017 after his successor, Jason Wheeler, quit after just 15 months.

By leaving the accounting chief job, Morton walked away from a $10 million new-hire equity grant that would have vested over four years. Friday was also slated to be the last day for Sarah O’Brien, Tesla’s vice president of communications, whose departure was announced last month.

Philippe Houchois, an analyst at Jefferies Group LLC with a hold rating on Tesla shares, said that Musk “seems to be on a slightly self-destructive bent.” In an interview with Bloomberg Television, he called for the company to split up the chairman and CEO jobs – Musk has served both roles since October 2008.

“The team, the skill set that have been phenomenal to create Tesla are not the ones we need for the next stage,” said Houchois, who has a $360 price target on the stock. “There’s a skill set that needs to be added at the top that Mr. Musk doesn’t have.

Tesla’s board of directors is on the lookout for senior talent but is not actively searching for a chief operating officer, a person familiar with the board’s thinking told Bloomberg News in August.

Morton and Toledano’s departures – and Musk’s performance on the podcast – also alarmed James Albertine, who rates Tesla a hold with a $300 target.

“Evidence is becoming more clear that Tesla needs to a entertain a major change in the C-suite,” Albertine wrote in a report. “The ongoing, effectively self-inflicted public relations crisis is now affecting key personnel within the organization and detracting the market from the fundamentals (which have been improving dramatically through 2Q18).”