May Mobility to launch self-driving shuttle in Columbus

After providing more than 10,000 trips to riders in Detroit, May Mobility is expanding its self-driving shuttle services to Ohio

May Mobility to launch self-driving shuttle in Columbus 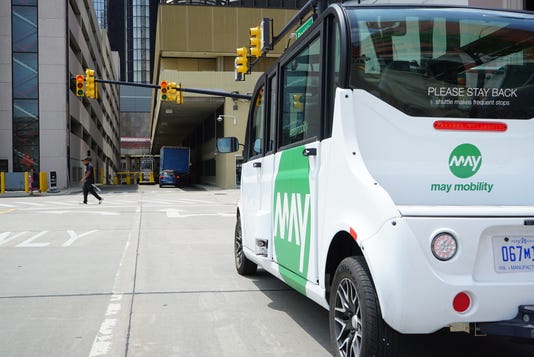 May Mobility operates a self-driving shuttle along a 1 mile route for Bedrock employees in downtown Detroit.(Photo: May Mobility)

May Mobility is taking what it has learned from its self-driving shuttles in Detroit to Columbus, Ohio.

Regional smart city initiative Smart Columbus and the Ohio Department of Transportation's DriveOhio said Wednesday that it granted the Ann Arbor-based startup a contract to operate an autonomous shuttle in its downtown that would be free and open to the public starting Dec. 1.

The news comes a week after May Mobility said it had provided 10,000 trips to riders in downtown Detroit after about 75 days in operation. In June, the company launched its first commercial fleet of autonomous vehicles on Michigan's public streets along a 1-mile route, shuttling employees of Bedrock, the real estate business of Quicken Loans founder Dan Gilbert. Ben Thompson, May Mobility's business development lead, said it reduced riders' waiting times from 25 minutes to four or five minutes.

"Bedrock is a great example of what we’re capable of," Thompson said. "In Columbus, we'll be serving a larger audience and exposing a wider demographic to autonomous transportation." 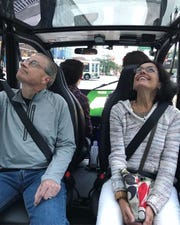 Riders take a trip on May Mobility's self-driving shuttles in downtown Detroit. (Photo: May Mobility)

The Columbus shuttle will service what's known as the Scioto Mile loop. Thompson said May Mobility on Tuesday began testing and mapping five 2- to 3-mile routes to accommodate construction and downtown road closures. Once up and running, three shuttles will run with four stops at the COSI Center Of Science and Industry museum, the Smart Columbus Experience Center, Bicentennial Park and the National Veterans Memorial and Museum, which is scheduled to open later this year.

Thompson said May Mobility's operations in Detroit have helped the company to better understand driver behavior and program around irregularities such as doubled parked vehicles.

Thompson said May Mobility expects to expand to four states by April with another announcement expected late next week. He said the company is looking at expanding to more routes in Detroit in 2019 such as around Henry Ford Medical Center, to other employers and to where the QLine cannot serve.

"That is the very focus in 2019," Thompson said, "expanding to new locations and in existing locations."