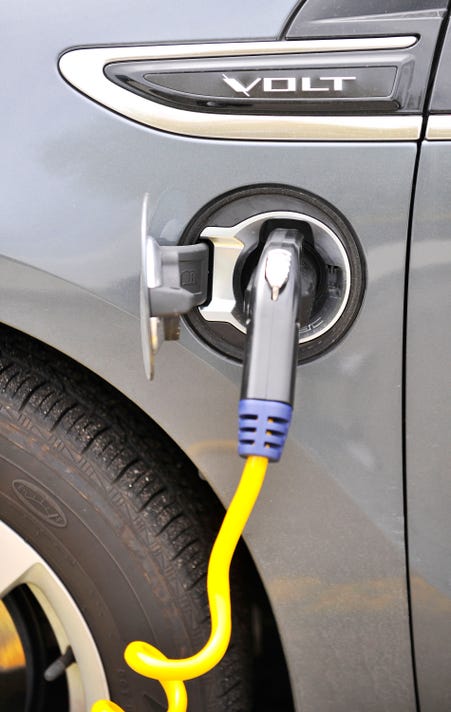 The proposal could present a blueprint for a potential deal between the Trump administration and California. The administration is pushing to freeze Obama-era gas mileage rules that would have required automakers to produce fleets averaging more than 50 miles per gallon by 2025, even as California already has zero-emission vehicle program in place and has sued to block the proposed mpg rollback.

GM's move is a sharp departure from that of its hometown rivals. At a hearing last month in Dearborn, Ford Motor Co. called for a single national fuel-economy and emissions standard, and Fiat Chrysler Automobiles NV said changes in emissions standards should "be based on market realities as they have evolved since 2012."

GM's plan could benefit the Detroit automaker. It already builds the all-electric Chevrolet Bolt and the plug-in hybrid Chevrolet Volt, powered by a 1.5 liter, four-cylinder gasoline-powered engine that takes over if the electric battery dies. GM sold 23,297 Bolts and 20,349 Volts in the U.S. in 2017.

In comments submitted Friday to the Environmental Protection Agency and National Highway Traffic Safety Administration, GM said a national zero-emission vehicle program would potentially result in 7 million long-range electric cars being on the road by 2030. The company said such a result would yield a reduction of 375 million tons of carbon dioxide emissions between 2021 and 2030.

Mark Reuss, executive vice president of global product development, purchasing and supply chain for GM, said the proposal to establish a national zero-emission vehicle program "has the potential to have a significant impact on reducing fuel consumption, reducing overall CO2 emissions, creating jobs and helping establish the U.S. as the leader in EV technology."

He added that GM is calling for a national zero-emission vehicle program that is patterned after existing programs in California and nine other states "so that we can cooperatively create policies that help move our country more quickly to an all-electric, zero-emissions future.

"A thoughtful, thorough, cohesive, national, 50-state program is the most effective and efficient way to get that done," Reuss said. "We view this proposed program as an important starting point for a much-needed national discussion on electric vehicle development.

"A program such as this will move the U.S. to a leadership position on electrification, a position that will help create jobs and encourage innovation, improve the environment, and make EVs more affordable for more customers."

GM’s proposal is patterned after zero-emission programs that are already in place in California and nine other states that require automakers to produce enough non-polluting cars to earn credits. The programs typically consider plug-in hybrid vehicles, battery electric vehicles and hydrogen fuel cell vehicles to be zero-emission.

GM's proposal calls for starting the national zero-emission requirement at 7 percent in 2021, with the bar increasing 2 percent each year to 15 percent by 2025 and then 25 percent by 2030. Credits would be issued per zero-emissions vehicle sold, based on the electric vehicle range. Automakers would also be able to average, bank and trade credits.

The cost of electric cars, concerns about their driving range and comparatively low gas prices have been cited as rationales for sluggish electric vehicle sales in the U.S. in recent years. Critics also note that U.S. drivers have demonstrated clear preferences for trucks and SUVs through their buying habits.

GM's proposal comes as Congress is debating the future of a $7,500 tax credit that the Bolt and other electric vehicles currently qualify for. Lawmakers in the U.S. Senate have unveiled a pair of bills that would either end the program or boost the cap on the number of credits per automaker that could be used.

GM has said it expects to hit the 200,000 limit on the $7,500 federal tax credit this year, but analysts have said at the automaker’s current selling rate, GM probably has until the first quarter of 2019. The automaker's proposal for a national zero-emission vehicle program would quintuple the number of non-polluting vehicles that are currently required by existing programs.

"It’s time — past time — for national policy to address climate change, with an industrial strategy that advances U.S. leadership in the technology that delivers the most benefit: Electrification," he said. "And its benefits are not solely environmental — we also see a massive economic growth opportunity."