Electric cars’ success will depend on better battery

To deliver an electric vehicle that’s cheaper, safer and capable of traveling 500 miles on a single charge, the auto industry needs a breakthrough in battery technology. Easier said than done.

Electric cars’ success will depend on better battery 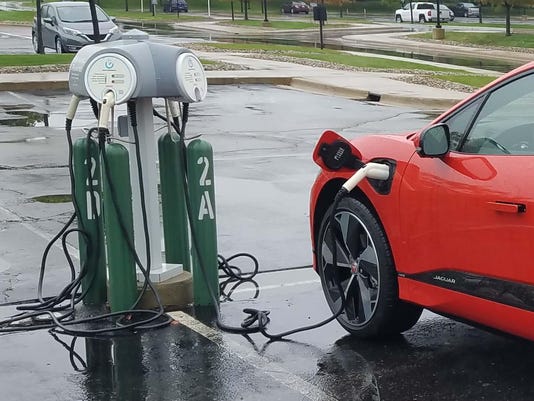 To deliver an electric vehicle that’s cheaper, safer and capable of traveling 500 miles on a single charge, the auto industry needs a breakthrough in battery technology. Easier said than done.(Photo: Henry Payne / The Detroit News)Buy Photo

To deliver an electric vehicle that’s cheaper, safer and capable of traveling 500 miles on a single charge, the auto industry needs a breakthrough in battery technology. Easier said than done.

Scientists in Japan, China and the U.S. are among those struggling to crack the code of how to significantly boost the amount of energy a battery cell can store and bring an EV's driving range into line with a full tank of gas. That quest has zeroed in on solid-state technology, an overhaul of a battery's internal architecture to use solid materials instead of flammable liquids to enable charging and discharging. The technology promises major improvements on existing lithium-ion packs, which automakers say are hitting the limits of their storage capabilities and may never hold enough power for long-distance models.

If it can be mastered, solid-state technology could help speed the demise of the combustion-engine car and potentially slash EV charging times to about 10 minutes from as much as several hours. The supercharger network built by Tesla Inc., now offering some of the fastest charge times, needs approximately 30 minutes to bring a depleted car to 80 percent.

“We don’t see another way to get there without solid-state technology,”said Ted Miller, Detroit-based senior manager of energy storage strategy and research at Ford Motor Co., which has studied various technologies aimed at delivering a more powerful EV battery. “What I can't predict right now is who is going to commercialize it.”

Currently, the best prototype with solid-state batteries is only powerful enough to propel a one-person vehicle across a Toyota Motor Corp.parking lot near Japan’s Mount Fuji. Car companies such as Daimler AG and Fisker Inc. are working on the task, as area Chinese lithium giant, the French oil company Total SA, and spinoffs from the Massachusetts Institute of Technology and Stanford University. Fisker may conduct vehicle tests as early as this year, while Toyota and Daimler timelines extend into the 2020s.

The stakes are enormous. Adoption of electric vehicles is already expected to fuel an exponential increase in lithium-ion batteries, the reigning replacement for the internal combustion engine. The latest report from BloombergNEF found that electric busses and passenger cars accounted for 44 gigawatt hours of lithium-ion battery demand in 2017, and by 2030 that demand is forecast to surge to over 1,500 gigawatt hours per year. Anyone with a viable solid-state battery that can outperform lithium-ion technology could gain the upper hand in a market for all EV batteries that will be worth about $84 billion by 2025, compared with about $23 billion now, according to UBS Group AG.

Lithium-ion technology, the standard for decades in mobile phones and personal electronics before moving into EVs and utility-scale energy storage, uses a liquid electrolyte to shuttle ions between the anode and cathode to charge or discharge a battery. A solid-state battery, as the name suggests, replaces this liquid with a solid material such as ceramic, glass or a polymer.

That should reduce the risks of batteries bursting into flames and allow for thinner cells and smaller packs that fit under a car seat. Researchers also want to pair the solid electrolyte with a lithium metal anode to improve energy density and enable EVs to travel longer distances without stopping. That could help stoke sales by erasing consumer worries about running out of juice midtrip.

Prototypes currently have battery life that's too short for a vehicle and suffer from poor conductivity, uncompetitive costs and a sometimes violent swelling and shrinking of materials when charged or discharged.

When scientists solve one problem, that typically exacerbates another, said Yasuo Ishiguro, managing director of Japan’s Consortium for Lithium Ion Battery Technology and Evaluation Center, or LIBTEC. The group of more than 25 companies including Toyota, Panasonic Corp. and NissanMotor Co.is backed by about $90 million in government funding to speed up progress.

“Among all the players out there, it seems like everyone has solved one or two or three of five of the most important things, but nobody has really solved everything,” said Henrik Fisker, chairman and chief executive officer of his namesake Los Angeles-based EV maker.

“For passenger cars, we should see prototypes in the early 2020s,” said Andreas Hintennach, head of battery research at Stuttgart, Germany-based Daimler. The automaker behind brands including Mercedes-Benz agreed last month on orders for $23 billion of current generation lithium-ion battery cells through 2030.

Those timelines may prove optimistic.

It will be the end of the 2020s before solid-state batteries with all the promised advantages are available, and even then, they still could be priced at a premium, said James Frith, a London-based analyst with BNEF.

Tesla, which says it talks frequently to developers and reviews battery prototypes, doesn't yet see a technology that's better than its existing lithium-ion packs. Its Model S can travel as far as 335miles on a single charge. “We’ve looked as hard as we possibly can,”Chief Technology Officer JB Straubel told an annual meeting in June. “We are all ears, we’d love to find it, but we haven’t found it yet.”

Tesla supplier Panasonic said it continues researching solid-state technology, though there are “many hurdles left before commercialization is possible.”

The biggest hopefor a breakthrough rests on Toyota, according to rivals, academics and patent data.

Asia’s largest automaker has at least 233 patents or applications concerning the technologyalmost triple the number of its closest competitor, according to an analysis by Bloomberg Law’s Tommy Shen. The company is investing $13.9 billion in its battery business and plans to commercialize solid-state technology by the early 2020s, according to its annual report released in October.

During the past decade, Toyota has deployed as many as 200 employees at a time to pursue the technology, primarily at its Higashi-Fuji research center close to Mount Fuji. The company has progressed in using solid-state batteries to power a digital clock, a two-wheel scooter and a conveyor belt before testing the technology in an adapted version of the COMS, its single-seat, low-speed car. The vehicle serves more as an inspiration to researchers than a mode of transportation, said LIBTEC's Ishiguro, a former Toyota manager.

With many existing EV battery makers focused on lifting volumes and lowering costs, Toyota's key challengers could be a cluster of U.S. startups, Ford's Miller said. In a reflection of this possibility, VW last year paid $100 million to increase its stake in QuantumScape, founded by former Stanford researchers and based in San Jose, Calif.

Solid Power, a Louisville, Colorado-based battery company, has had a development partnership with BMW AG since December 2017. CEO Doug Campbell said he’s confident solid-state technology will be commercially viable in cars. Just not for another five to 10 years.

“I’m not going to say that there aren’t challenges in front of us,” Campbell said. “But I am confident that I don’t see challenges where it says: Insert Miracle Here.’”