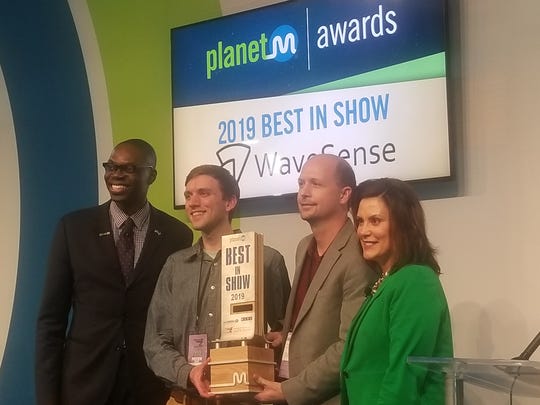 At the Detroit auto show, PlanetM, the mobility initiative of the Michigan Economic Development Corp., held its second annual awards to showcase futuristic mobility opportunities from around the world.

"You go to other shows like (the Consumer Electronics Show), and they have similar competitions that showcase innovation and creativity in technology," said Trevor Pawl, group vice president of PlanetM. "At the Detroit auto show, we wanted to be a part of that and highlight all the exciting work happening in Detroit."

Massachusetts-based WaveSense was recognized as the top autonomous driving project and best-in-show. The company uses ground-penetrating radar technology to create a map of each road's unique subsurface signatures to assist self-driving cars in challenging conditions such as snow, fog and faded vehicle lanes.

In mobility services, Detroit-based DeepHow, established in July, won for its artificial intelligence technology that creates a depository for skilled trades knowledge and then builds step-by-step instructional videos to teach the information. The technology is being used by Ford Motor Co. and other local manufacturers, said Sam Zheng, the company's founder and CEO.

"There is this concern that AI is going to take over people's jobs," Zheng said. "We are using the technology to empower people's lives and solve a persisting problem many businesses face."

The electric mobility winner was Detroit Flying Cars. The Livonia startup established in 2016 is designing electric vehicles that can convert from road to air. The company made headlines last month when a mishap during a test run led its co-founder, Sanjay Dhall, being taken to the hospital.

"This award shows that people are interested in a machine that is able to both fly and drive," said Isaac Kocherla, air dynamics engineer for the company. "We are going to continue to work to make that happen."

Contributing to the future of smart spaces, Dubai-based Derq, a spinoff of the Massachusetts Institute of Technology, is using artificial intelligence to predict behaviors and warn autonomous vehicles to prevent crashes.

In the connected cars space, Chicago-based Haas Alert was recognized for its responder-to-vehicle technology that alerts drivers' phones and vehicle screens when an emergency response vehicle is en route.