If Michigan stands a chance in the auto industry that is becoming more technological and service-oriented, it needs to focus on developing its workers 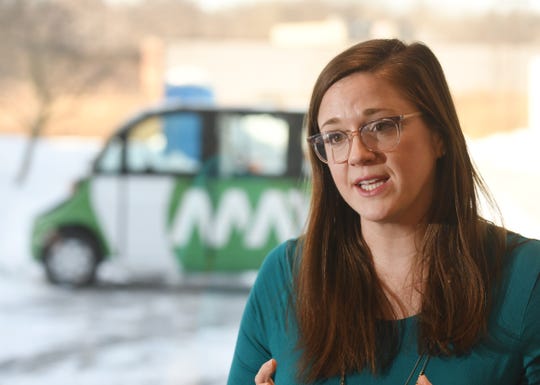 Alisyn Malek, COO of Ann Arbor-based May Mobility, which operates self-driving shuttles, says the Michigan auto sector requires a different mindset to provide “a service that you need your customers to consistently want." (Photo: Daniel Mears, The Detroit News)

The ambitions are proof, Michigan leaders and industry experts say, that the state that put America on wheels possesses the workforce and knowledge — at least for now — to play a significant role in putting connected, autonomous and electric vehicles onto the pavement. But they caution that Michigan needs investment to attract and develop talent here to maintain its competitive position.

"You have to fight to not move to the coasts," said Alisyn Malek, a former General Motors Co. executive who is the chief operating officer of May Mobility Inc. The Ann Arbor-based startup operates self-driving shuttles in Detroit, in Columbus and soon in Grand Rapids and Rhode Island.

Detroit's Big Three have invested hundreds of millions in Auto 2.0 companies with operations on the coasts. Planned investments in technologies like automation and electrification are part the reason Ford Motor Co. and GM are cutting thousands of salaried workers, even as they hire new people with the right skill sets.

GM's autonomous-vehicle subsidiary, Cruise Automation, is based in San Francisco and is hiring for a new Seattle office. Ford is planning an autonomous and electric vehicle campus in Corktown, but Argo AI, the driver behind its self-driving model, is headquartered in Pittsburgh. Fiat Chrysler Automobiles NV is partnering with Mountain View, California-based Alphabet Inc.'s Waymo LLC and other companies.

"No one has come out and said it, but keeping your headquarters here while the business is making money from its operations over there won't make sense in the long run," Malek said. "The headquarters is going to follow the shifting center of revenue gravity. It's too early to tell to what extent this will happen, but we don't have a lot of time to change the inevitable course."

Waymo announced last month it will open a plant somewhere in Metro Detroit to outfit Chrysler Pacifica minivans and Jaguar i-Pace electric vehicles with its self-driving technology. The Google affiliate plans to hire up to 400 engineers, operation experts and fleet coordinators. The Michigan Economic Development Corp. approved an $8 million grant to support the move.

"Michigan has this unique combination of deep research and development capabilities, but then, manufacturing is in our DNA," said Jeff Mason, CEO of the Michigan Economic Development Corp. "We know how to build things and build volume."

The move, Malek said, is an indication that Waymo recognizes the expertise Southeast Michigan has in designing hardware and safety systems, integrating new technology into automotive platforms — and just plain building cars and trucks.

But if Michigan's auto sector wants to book the fatter profit margins that come with providing mobility services, there needs to be a change in mindset, Malek said: "You're not just bending metal and forcing it upon dealers, which is how it works now. You're providing a service that you need your customers to consistently want."

That model still is foreign to the automotive industry, she added. But it's relevant to such industries in the state as health care and enterprise software, and there needs to be greater collaboration between the industries to share that knowledge.

'Need to work together'

May Mobility had its eye on collaboration when it chose Ann Arbor for its headquarters. The reason: proximity to many auto suppliers and University of Michigan graduates, assets the automotive industry needs to leverage and more fully appreciate.

With these and more, Detroit has the ability to become the mobility equivalent of New York's financial and Silicon Valley's technological ecosystem, said Chris Thomas, president of the Detroit Mobility Lab, a group working to ensure Detroit's future in the mobility industry.

"We need to work together to create amazing people who want to work in this region with this understanding that they may not stay with our firm and that, more than likely, they are going to bounce around," Thomas said. "And we have to be OK with it and know that having those opportunities is actually good for us, because it brings and keeps people here."

Michigan has 17 automakers and hundreds of suppliers present in the state, according to MICHauto, the automotive economic development arm of the Detroit Regional Chamber. Southeast Michigan also is home to 27 mobility pilot programs, testing facilities and research centers.

The state is responsible for 75 percent of the automotive research and development that happens in the U.S., and 20 percent of its manufacturing. Michigan also has the highest concentration of engineers anywhere in the country.

But not all of those engineers are suited for the work that the new automotive industry demands, said Kristin Dziczek, vice president of industry, labor and economics at Ann Arbor's Center for Automotive Research. Traditionally, graduates leave an engineering program, get a job and build expertise in one specific part of the vehicle.

"You need exposure to a lot more factors and facets of the industry than you do coming in as a low-level auto engineer who is going to design cup holders," Dziczek said. "We're expecting more diverse exposure to broader areas than being narrowly focused for your whole career."

Those are fields such as artificial intelligence, robotics and software, said Jessica Robinson, executive director of the Michigan Mobility Institute, a new initiative of the Detroit Mobility Lab to develop curriculum for the mobility future.

Self-driving and electric cars will help create more than 100,000 jobs in the coming decade, including up to 30,000 jobs for engineers with degrees in computer-related subjects, according to research from the Detroit Mobility Lab and Boston Consulting Group. But demand could be as much as six times the expected number of such graduates.

One of the first projects of the Michigan Mobility Institute is to launch a Masters of Mobility degree, a 9- to 12-month program to provide additional training to transition into a future of mobility services and familiarize students with the technology behind them.

The goal is to launch the degree by 2020. The institute is in talks with the University of Michigan and other national and international universities, Robinson said.

But companies need that talent now and are working with universities or designing their own curriculum.

Engineering and electronics firm Robert Bosch GmbH offers intensive bootcamp-style qualification courses in electrification, software development and digital transformation. The company plans to have all related employees in North America partake in them over the next few years after launching the programs in 2018, said Kavita Phadke, director of learning and development for Bosch in North America.

Macomb Community College's Center for Advanced Automotive Technology, a program founded by the National Science Foundation, offers certificates and courses in autonomous, connected and electric vehicles, as well as a vehicle-development technician associate's degree it launched in the fall.

Washtenaw Community College's Advanced Transportation Center recently acquired a replica of an internal networking system from a vehicle to help its skilled technician and pre-engineering students identify its vulnerabilities.

"That is in high-demand today," said Alan Lecz, director of the Washtenaw center. "There's a number of professionals who also come to upgrade their skill sets. There has to be continuous learning after they get their degree or certificate. This is a concept of planning for lifelong education in these emerging fields."

That is key for Michigan to maintain its leadership and relevance in the mobility sector, Detroit Mobility Lab's Thomas believes.

"It's not our birthright," he said. "We have immense opportunity to win. It's going to be really hard. As a region, as competitors, as an industry, we have to all be aligned on some things, and the creation of talent has to be one of them."