More electric vehicles are expected to be sold in the United States over the next few years, but the infrastructure to charge those cars is just starting to take shape.

Most major automakers are betting big on electrification, with some promising to do away with internal combustion engines altogether. The push to electrify is driven largely by stricter emissions regulations in the U.S., Europe and China as they address pollution and climate change. 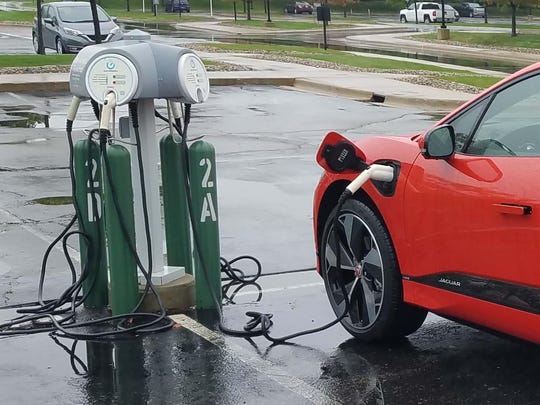 Charging access is one of three main barriers to electric car ownership, along with price and range. That has required teaming with property owners and regulators as automakers to rethink how drivers refuel. (Photo: Henry Payne / The Detroit News)

Tesla Inc. and its Supercharger network notwithstanding, a handful of start-ups have led the effort in the last half-decade to build fast-charging infrastructure for the masses — and that's key to reducing range-anxiety, considered one of the biggest barriers to EV ownership. That has required collaboration with property owners, regulators and automakers to rethink the way drivers refuel.

"We took the position early that you need to rethink fueling when it goes electric, not thinking myopically about trying to pattern-match how gas stations work," said Pasquale Romano, CEO of ChargePoint, a California-based EV infrastructure company.

ChargePoint, with some 66,200 charging stations, is considered one of the leaders in EV infrastructure development. The reason, Romano says, is because the company made the right bets early on.

The way Romano and other leaders in the charging sector see it, juicing your electric vehicle doesn't have to be a monitored activity like it is with gas-powered cars. Instead, it can be something the car does while you're inside at the grocery store or in the office.

Most EV drivers already do a majority of charging at home or at work, when the vehicle is most often at rest. That's why companies like ChargePoint and EVgo — which are both working with General Motors Co. on crowdsourcing a more comprehensive charging network — are focused on selling their chargers to corporate and retail property owners.

"The way we think it works is a lot more like how Airbnb became one of the largest hotel providers without owning a single hotel room," Romano said. "We're crowdfunding the largest fuel network on the planet by getting property owners to do their part to offer charging as an amenity."

Volkswagen AG, leaning heavily into electric vehicles as it recovers from the Dieselgate scandal, is spending millions through its subsidiary Electrify America to install more than 100 charging stations at Walmart superstores in the U.S. ChargePoint and Electrify America recently forged a partnership that will connect more than 30,000 Level 2 and DC fast-chargers across the U.S.

EVgo, which has more than 1,100 fast-chargers, was launched in 2010 as part of NRG Energy Inc., an electric-utility company dual-headquartered in New Jersey and Texas. The EVgo charging network expanded as part of a $102 million settlement with the California Public Utilities Commission over the company's role in a 2001 power crisis. NRG sold EVgo to Colorado's Vision Ridge Partners in 2016. 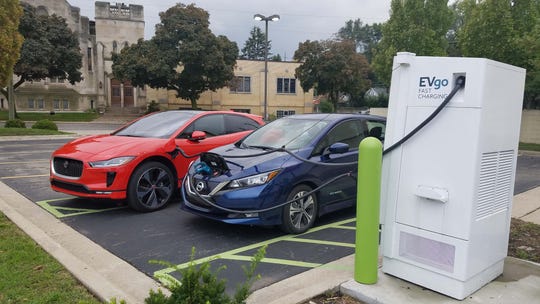 There are still some vehicles that can’t plug into every charger, depending on the amount of power the charger delivers. But that’s likely to fall away, said Mike Ramsey, an analyst for research firm Gartner Inc. (Photo: Henry Payne, The Detroit News)

Now, EVgo acts as the owner and operator of its charging equipment, working with property owners on site design and utilization. The goal is for EVgo to make the interaction between drivers and chargers as simple as possible.

"We have to be aligned with the customer," said Jonathan Levy, vice president of strategic initiatives for EVgo. "If a charger is broken, we can't make money ... our entire job is to grow and scale to make sure there aren't barriers to EV adoption."

One of the more confusing experiences for new owners of EVs is a lack of standardization in charging ports. There are still some vehicles that can't plug into every charger, depending on the amount of power the charger delivers. But that's likely to fall away, said Mike Ramsey, an automotive tech analyst for research firm Gartner Inc.

"We're still in the infancy years here," Ramsey said. "This is the sort of thing where not having a settled standard isn't necessarily a disaster — like with cellphone adapters that are around that can make this work. But eventually I think we will settle on one standard."

Among U.S. automakers, GM has largely led the way for electrification, promising in October 2017 that it would introduce 20 new zero-emission vehicles by 2023. The Detroit automaker was the first to release a mass-market long-range electric vehicle, the Chevrolet Bolt EV. And GM was the second automaker to hit a 200,000 electric-vehicle cap on a $7,500 federal tax credit for EV buyers. Tesla was the first to reach the limit.

Access to charging is one of three main barriers GM identified early on in its research. The other two are vehicle price and range.

"Price and range are directly under the automaker's control," Ableson said. "When it came to charging infrastructure, (GM) decided we needed to get a team in place to address that, which involves working across some industries that traditionally haven't worked together so closely."

GM announced at the beginning of this year it would collaborate with EVgo, ChargePoint and Greenlots — three of the biggest EV charging networks — to aggregate data for use in an updated version of the myChevrolet app. Using data gathered, GM will integrate new features such as real-time data on the status of more than 31,000 charging stations and each station's compatibility with a Bolt — all of which can be accessed through the Bolt's infotainment system.

This sort of collaboration is critical for companies like GM, which is executing a sweeping restructuring designed to cut costs and redirect capital toward expensive electrification, autonomy and mobility efforts.

"We see the funding of electric vehicle programs as the best use of our capital, not to build our own charging networks," Ableson said.

That's something Tesla sought to do early on, creating the Supercharger network that now has thousands of charging stations across North America, Europe and Asia.