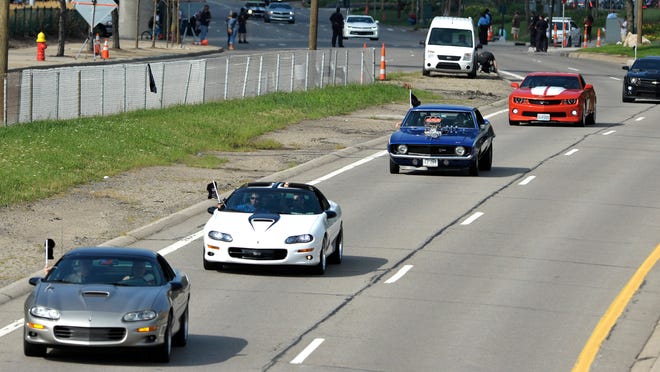 Move over, Corvette. This year Camaro is Chevy’s King of the Cruise. Celebrating its 50th anniversary, the iconic pony car lit up its tires and lit the torch to open the 22nd Annual Woodward Dream Cruise on Friday morning.

Reuss then jumped into a 455-horsepower 2016 Camaro SS — the same car Roger Penske used to pace the field at this year’s 100th Indianapolis 500 — and led the noisy parade up Interstate 75, through mid-morning traffic, and onto Woodward. Final destination: the Iroquois Club north of Square Lake Road. While Penske hit 140 mph on Indy’s back straight, Reuss was much more civilized, following a police escort at a tame 50 mph.

“This is the Camaro’s cruise. You only turn 50 once,” grinned Reuss, whose first car was an original red 1967 Camaro that he found for $1,500 in Missouri.

GM’s motorhead-in-chief was followed by Camaro faithful who answered the call for this year’s parade from 16 states, Ontario — and one guy from Norway. All six generations of the car were represented.

Among the field was Mark Stielow of Milford, Michigan. GM engineer by day, Camaro hobbyist by night, Stielow has updated 15 original Camaros to modern spec — including the stunning yellow ’69 SS he stuffed with a 6-liter V-8 from the current ZL1 Camaro, six-speed manual transmission (replacing the old “three-on-a-tree”) and coil-over shocks. You could hear him fire it up from Pontiac.

Walt Stiles, 73, came all the way from Syracuse, New York, for the morning “Camaros and coffee” rally in his pristine red 2016 Camaro SS. This is Stiles’ fourth Camaro — the first was a 1994 Z28 — and it is his favorite. No wonder — the sixth-generation cars are light-years advanced from that fourth-generation. Today’s car is not only built on a stiff platform shared with the nimble Cadillac ATS, but it has 4G LTE WiFi, Apple CarPlay and state-of-the-art suspension. The original car rode on leaf springs still found in pickup trucks today.

I followed Peters up Woodward in his own classic red 1969 Camaro. I was behind the wheel of a brand-new 2017 50th anniversary-edition SS festooned with Detroit News decals. Chevy is offering the 50th anniversary edition with all three powertrains — turbocharged 4-cylinder, V-6 and V-8. You’ll know it by its “Nightfall Gray metallic” color, orange accents — Brembo brake calipers, hood stripes, leather seat-stitching — and unique 20-inch wheels. With “FIFTY” tattooed on the front fenders, Chevy expects to sell 5,000 of them.

I tried to provoke Peters into some burnouts up Woodward with the modern 560-horsepower, 427-cubic inch V-8 that he stuffed into his car. But he behaved himself.

As did Reuss who was clearly tickled to be in the same car Penske had driven at Indy. It was Reuss who asked the 79-year-old Indy legend to pace the field at Indy in his 50th year racing at the brickyard. “He was over the moon about it,” recalls Reuss, “No one had ever approached him about doing it before.”

The parade even included a classic 1991 Camaro cop car the Michigan State Police still owns. Underneath its blue exterior is an IROC-Z — the performance version of the ’91 Camaro Z28.

“We used them for traffic enforcement only,” said officer and driver Mike Shaw, 52, referring to the muscle car’s specialty of running down high-speed scofflaws. “We could chase down anything.”

At Friday’s parade, everyone stayed in line.

Henry Payne is the auto critic for The Detroit News. Find him at hpayne@detroitnews.com