VW love at Dream Cruise: A different kind of nostalgia

VW love at Dream Cruise: A different kind of nostalgia

Bruce Amacker and his wife, Pat, of Cleveland, Ohio, show off their VW bus in Birmingham on Saturday.(Photo: Jo Kroeker / The Detroit News)Buy Photo

Birmingham — They may be thousands of miles from San Francisco's Haight-Ashbury district, but Volkswagen buses still find a cult following at the Woodward Dream Cruise.

"There's nothing cool about it," said Jason Swistoski, Platinum Motor Cars' VW expert. "It's a round bus with an air-cooled engine. There's no power steering. Driving 60 miles per hour down the highway feels like you're going warp speed in the Millenium Falcon."

But no matter who passes the Volkswagen buses, the reaction is the same: a picture and a smile.

One passerby was so excited to compliment the original orange bus with a Westphalia camper (for sale, even) at Woodward and Worth on Saturday that he dropped his drink and it exploded.

Bruce Amacker and his wife, Pat, of Cleveland, Ohio, were spending the day in the shade, watching people stop, snap and smile at their pristine red and white VW bus at Woodward and Webster. Bruce, who works diesel trucks, restored it over the course of a year and a half — it's now unrecognizable from its before pictures. They've been coming from Cleveland since 2002.

Everybody has a VW story, even if the details of extravagant tales don't always add up, said Bruce Amacker, 58.

Pat, 62, chimed in with an anecdote she once heard: "I drove across country in one with $2 in my pocket," she said.

"You hear stories: Oh yeah, I smoked pot in one of those. ... This hippie I hung out with had one. You're always able to associate it with something," Swistoski said.

Swistoski and Amacker both stick to VWs because, Swistoski said, it's a symbol of the work they put in, a lifestyle.

They are also simple. 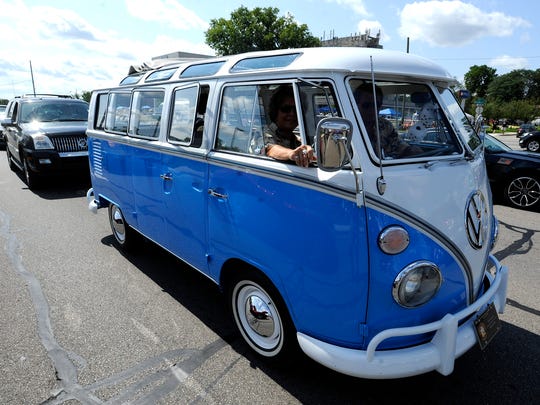 Tom Schick owns Auto Europe Garage in Birmingham. His father was a European immigrant who worked for Foster's Garage, the first importers of VWs to Michigan in the early ’60s.

"All you need is a 13-millimeter screw, a wrench and a hammer, and you can pretty much fix any problem," Schick said.

Like the time Swistoski fixed a belt with pantyhose while in the mountains of Colorado.

He and others here represent the old guard of VW fans — the ones who, if they see each other broken down, they'll stop, check in and help how they can.

A lot has changed since these buses could be found in Haight-Ashbury: Attrition meant aficionados could find them for $500 to $600. Now the good ones go for $30,000, such as the Westphalia camper orange bus, because they're niche and hipsters like them, Swistoski said. The core fanbase, however, is shrinking, and people today don't have the same connection, he said.

It may not be the most iconic car today, but these buses still have a cult following.