Dream Cruisers and classic car fans will have a chance to peep at what's arguably the most famous Mustang to ever smoke its tires Saturday. 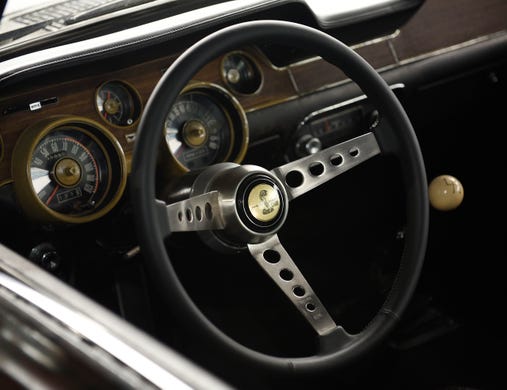 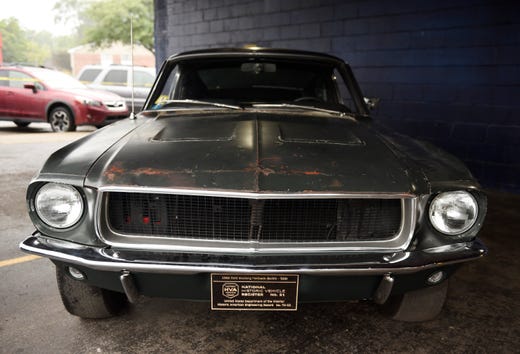 The 1968 Mustang GT Fastback sits under a cover out of the rain. Clarence Tabb Jr., The Detroit News
Fullscreen 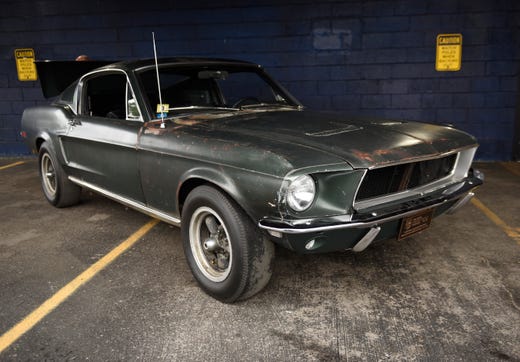 The 1968 Mustang GT Fastback driven by Steve McQueen in the movie "Bullitt" will be in town for the Dream Cruise. Clarence Tabb Jr.,
Fullscreen

Sean Kiernan poses in front of his 1968 Mustang GT Fastback, the original car driven by Steve McQueen in the movie "Bullitt." Kiernan said he's happy to have another chance to let fans see the pony car at the Woodward Dream Cruise. Clarence Tabb Jr., The Detroit News
Fullscreen 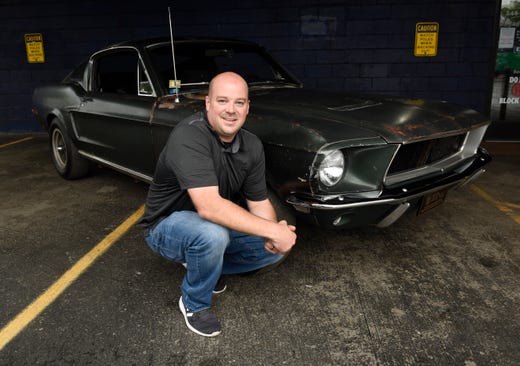 Sean Kiernan poses in front of his 1968 Mustang GT Fastback, the original car driven by Steve McQueen in the movie "Bullitt." Kiernan said he's happy to have another chance to let fans see the pony car at the Woodward Dream Cruise. Clarence Tabb Jr., The Detroit News
Fullscreen

The 2019 Mustang Bullitt rolls alongside the 1968 Mustang fastback, used in the Steve McQueen film "Bullitt," at the 2018 Goodwood Festival of Speed held near Chicester, England. Ian Thibodeau, The Detroit News
Fullscreen

The original car from the movie Bullitt is driven into the stage during the Ford reveal on Sunday at the Detroit auto show. Ford is not alone in leveraging its past to produce near-term profits to fund electrified, self-driving technology for the future. David Guralnick / The Detroit News
Fullscreen

Hundreds of media surround a display of one of the original cars from the Steve McQueen movie "Bullitt." David Guralnick, The Detroit News
Fullscreen 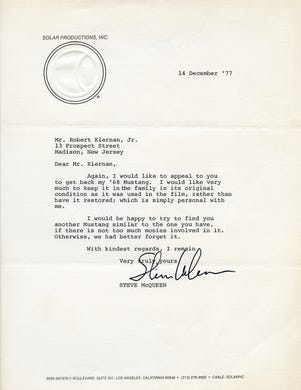 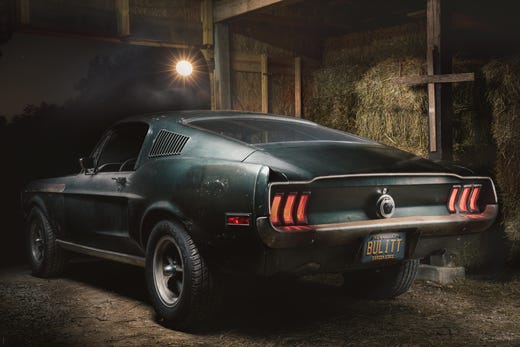 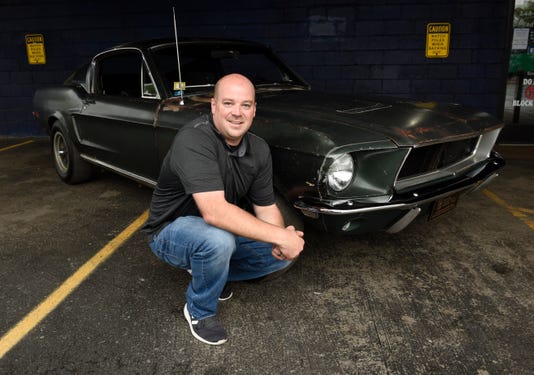 Royal Oak — It takes the 50-year-old pony car a minute to wake up.

But as Sean Kiernan revs the engine of his Mustang GT Fastback, smoke spills from its dual exhaust then the iconic taillights of the '68 flicker. And after a minute, he backs the roaring muscle car out of its trailer to meet a small crowd of Ford employees standing with phones ready to snap a shot of the car.

The car draws attention with its Steve McQueen coolness because it's the car the actor made famous in the classic film "Bullitt."

"It's the first time since Goodwood I've really been able to let her idle," says Kiernan from behind the wheel of the speed festival in England.

And it's the second time Metro Detroit will get a look at the famous pony car. Kiernan and his wife, Sam, are eight months into a grand tour of museums, automotive events and various showcases around the world with Ford Motor Co. to help the automaker promote a new 2019 special edition Mustang Bullitt, and the rich history of the Mustang brand.

The Dream Cruise marks the '68 Mustang's first trip back to Metro Detroit since Kiernan drove it on-stage at the 2018 North American International Auto Show in January. 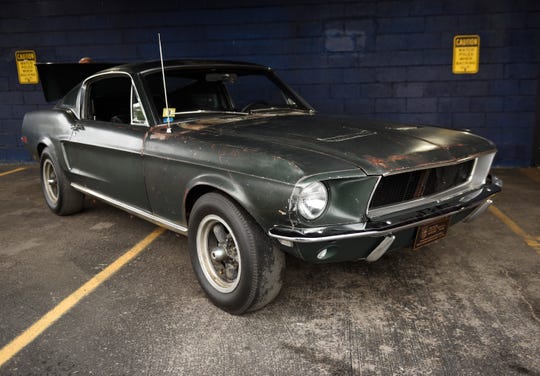 The 1968 Mustang GT Fastback driven by Steve McQueen in the movie "Bullitt" is in town for the Dream Cruise. (Photo: Clarence Tabb Jr., )

Dream Cruisers and classic car fans will have a chance to peep at what's arguably the most famous Mustang to ever smoke its tires — or at least pretend to — in a display in the Kruse and Muer on Woodward parking lot just past Catalpa at 28028 Woodward.

Kiernan's car will join a few other iconic Mustangs in that parking lot: the 10-millionth ever made, which debuted a week ago. The first Mustang ever sold. The 2019 model meant to honor Kiernan's car.

Those vehicles will be kept in displays meant to look something like Matchbox car boxes. Ford, the Dream Cruise Sponsor, has put the Mustang front-and-center this year. It's soon to be the only passenger car — a vehicle that's not a crossover, SUV, truck or van — in Ford's lineup.

The automaker hosts Mustang Alley each year at the cruise on Nine Mile in Ferndale, where Mustang owners can park their ponies, pop the hood and kick back while passersby lean in to take a look at models from years past.

The automaker expects nearly 1,000 Mustangs to stretch a mile there on Saturday, Aug. 18. New 2019 Mustang Bullitt and historic Mustang Bullitt models will parade down Woodward at 7 a.m. that morning. The automaker will also host a family fun zone featuring its SUVs and CUVs in Pioneer Park all day Saturday.

"The Bullitt basically set the tone for car chases in American movies," said Eric Cin, global director of vehicle personalization and Ford Performance parts at Ford, before introducing the fastest Mustang ever made Thursday. 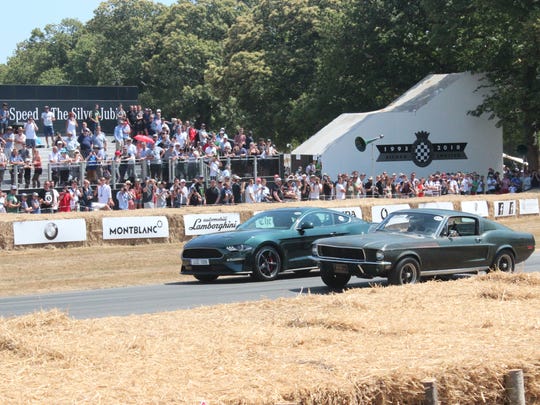 The 2019 Mustang Bullitt rolls alongside the 1968 Mustang fastback, used in the Steve McQueen film "Bullitt," at the 2018 Goodwood Festival of Speed held near Chicester, England. (Photo: Ian Thibodeau, The Detroit News)

Even the $130,000, 1,000-horsepower limited-production Cobra Jet bows to the original Bullitt.

"The car itself gets the looks and all kinds of respect," Kiernan said. "Rarely do we come out with a car that's unrestored, that's frozen in time. It brings people back pretty fast. I love that part of it."

Kiernan calls his stewardship of the vehicle a "preservation" rather than a restoration. His dad bought the car in the early 1970s from the man who got it after shooting had finished on "Bullitt."

Only four people besides Kiernan have sat in the driver's seat after the film: his mom, his late father, Bob, Jay Leno and the man who owned the vehicle for a brief time after the movie. Kiernan doesn't let anyone drive it, and the car will be behind glass in the display on Woodward for the Dream Cruise.

The car is a Kiernan family heirloom. His mother, Robbie, drove it around as her daily vehicle before she and her late husband started a family. Kiernan turned off the odometer on the vehicle so that the last mile recorded on the car was that driven by his father.

In 2001, Kiernan and his father took the car apart. When Bob died in 2014, the car was still in pieces. Kiernan recently reassembled it, and then reached out to Ford.

This weekend, he gets to watch people in his second hometown — Kiernan's wife, Sam, grew up in Metro Detroit — grin as they see in person the car that launched numerous motorheads. Kiernan's a car fan, too.

While everyone's looking at the Bullitt, Kiernan will be watching Woodward.

"It's absolutely gratifying," he said. "These are the events I love because we're seeing everything driving up and down the road. When it comes down to it, I'm just a car guy."