In a pedal-to-the-metal world, the Dream Cruise coaxes car nuts to stop and stare

is celebrating its 25th year —

but the theme of the event goes back much further than that.

What we’re trying to say, amid the happy cacophony leading up to it Saturday, is that the Woodward Dream Cruise, the biggest one-day auto event in the world, is finally here. 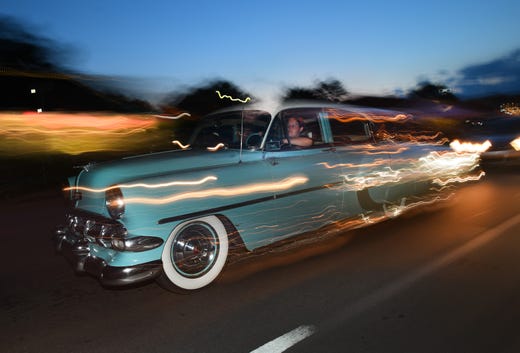 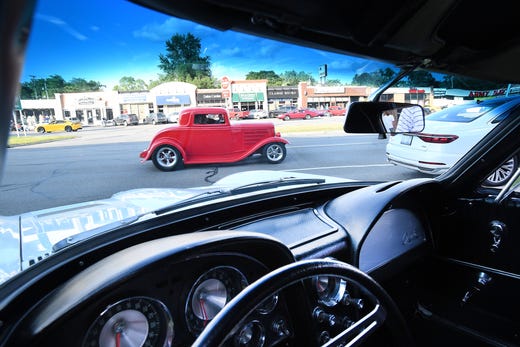 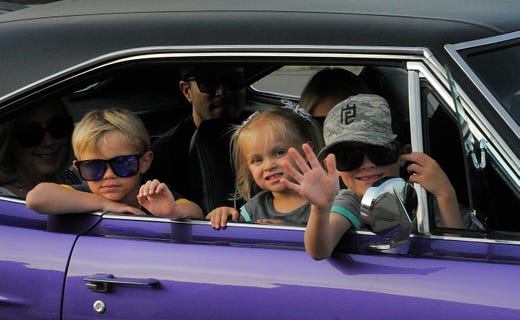 Kohen Kuberg, 5, McKenna Kuberg, 2 and Dakota Kuberg, 6, wave to the crowd from inside a purple 1970 GTX. Daniel Mears, The Detroit News
Fullscreen 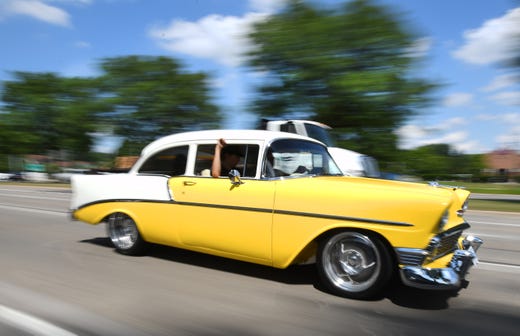 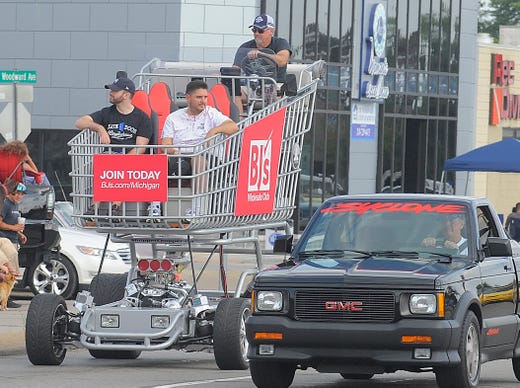 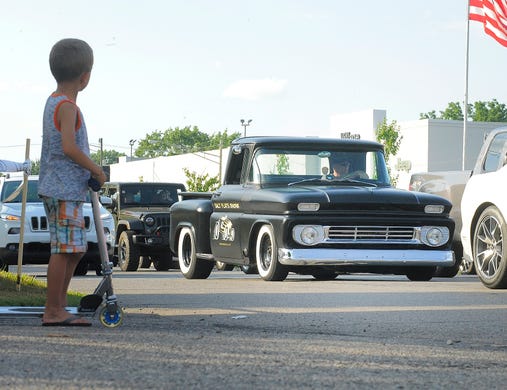 Max Rondeau 5, check out the hot rods from his razor scooter perch along Woodward Avenue in Royal Oak. He and his family came all the way from Colorado to experience Dream Cruise 2019. Daniel Mears, The Detroit News
Fullscreen 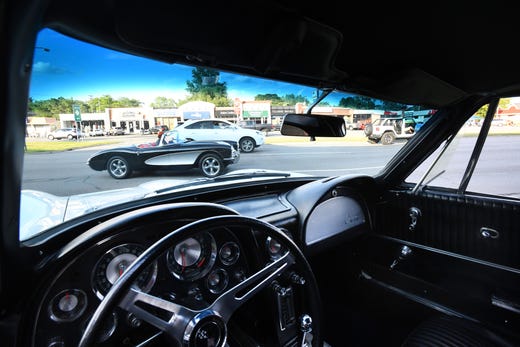 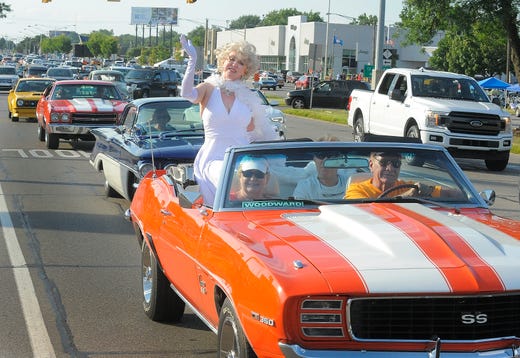 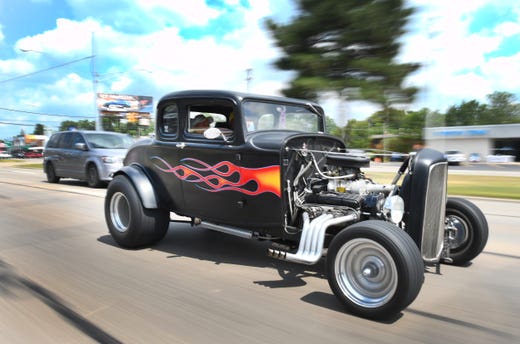 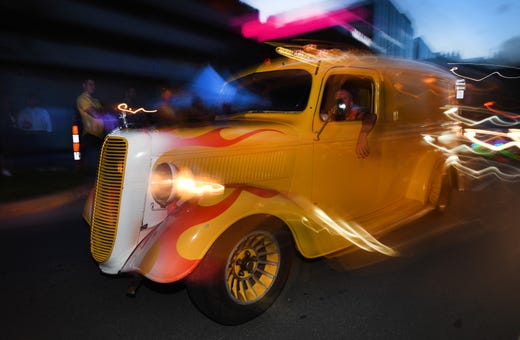 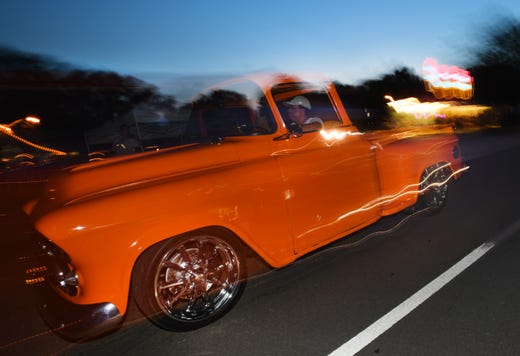 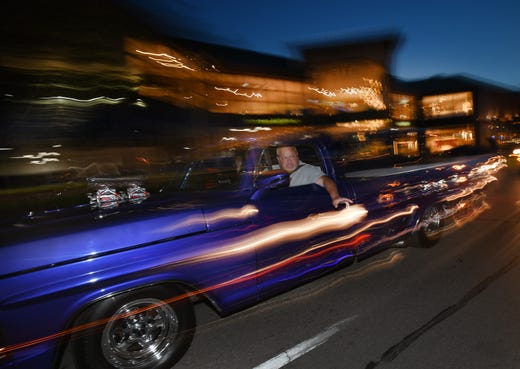 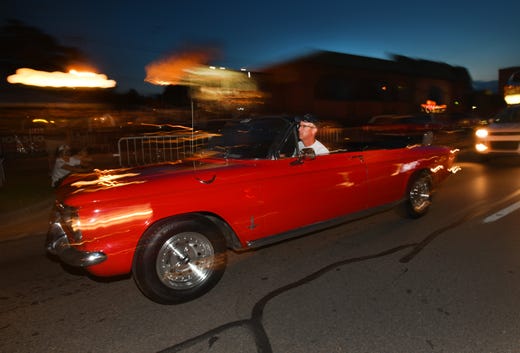 And while the 25th milestone focuses on the event’s origin, 1995 is merely the year the shindig started.

The spirit of this rolling, rollicking bazaar of car culture, its very soul, lies in the 1950s. That’s where many of the vintage cars meandering along Woodward Avenue came from. And it’s where the hearts of their owners remain.

“Good times,” said Randy Richards of Dearborn, who, for a moment, seemed lost in the reverie of his youth. “We had a lot of fun, that’s for sure.”

If you’ve ever met one of these vehicles from yesteryear, you’d probably remember him or her. (They have so much personality they deserve a personal pronoun.)

Personality? How else to describe these twin-turbo, gold-rimmed, chrome-plated denizens with tail fins, oversized grilles and suicide doors? 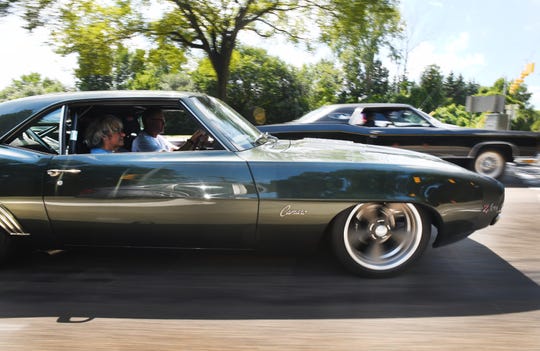 These roosters of the roadway don’t just drive down a street. They strut, wave wildly, blow kisses.

If the cars of today are the staid, button-down business execs going to work in the morning, these classics are hipsters in orange jeans and shutter shades at the Sugar House.

“They’re just cool,” said Gee-Gee Zimmerman of Clinton Township, who came to Woodward this week to get an early gander. “You fall in love with every one.”

Zimmerman certainly fell in love with a 1954 Packard Clipper. She liked it so much she bought it. And was showing it off along the strip.

The old cars aren’t just distinct from new ones, they’re different from each other, she said. Some reflect the tastes of their owners.

The flamboyance on parade Saturday comes with a mixture of pride.

That’s because the Cruise, which expects 40,000 vintage cars and a million-plus oglers, celebrates a time when all roads led to Detroit.

Most of the customs, classics, exotics, muscle cars and hot rods on Woodward were made in the Motor City. General Motors alone once produced more than half the cars in the world.

Just ask Ron Marshall, who was driving a 1954 Corvette along Woodward this week.

“I had to have it. It spoke to me,” the Ann Arbor resident said.

For many revelers, the flotilla of chrome and steel brings a strong whiff of nostalgia.

They’re well familiar with this 16-mile stretch of Woodward Avenue in Oakland and Wayne counties. They have been traversing it since they learned how to drive.

They no longer have the same car from the 1950s or ‘60s, but chances are they have an auto that’s a lot like it.

Richards, 73, used to cruise along Woodward in the ‘60s in an old Chevy. He would stop and talk with friends who were pretty much doing the same thing. 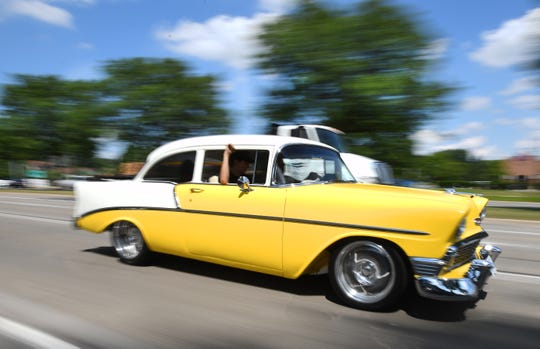 “We didn’t go anywhere. We just drove back and forth,” he said.

He no longer has the car. He has no idea what happened to it. But it never let go of his heart.

He had always wanted another Chevy but never got around to buying one. Several years ago, he was reading something on the internet and came across an ad for a 1957 model. He’ll be driving it Saturday.

Their ambitions may have come and gone, but they still have some sizzle in their lives. They're riding in it.