The odd thing about DIY projects is that homeowners try to save time and money and often end up spending more of both. 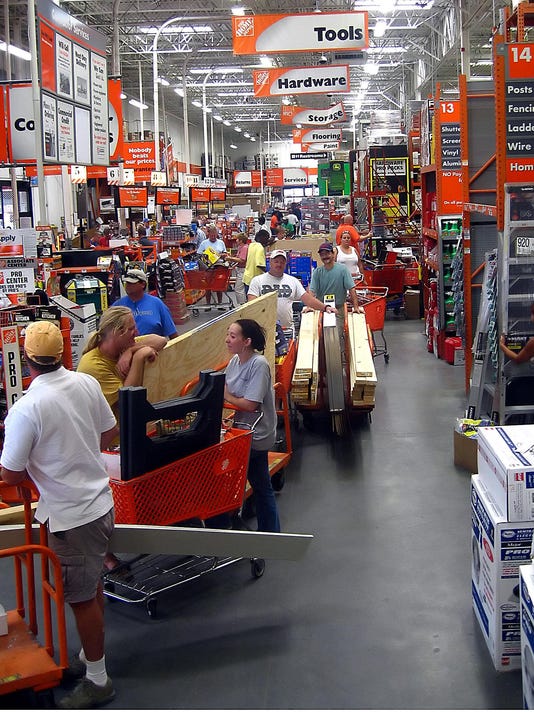 By avoiding the costs of labor, profit and any mark-up on materials, you can close that gap between the nearly $20,000 loss you’ll take on a home office remodeling that costs, on average, $31,338.(Photo: Detroit News file photo)

My father used to say that he didn’t need a hobby, because he owned a house, which presented him with lots of lots of home repairs and improvement projects, as well as the opportunity to use just as much profanity as he would have on the golf course.

The weird thing about these kind of do-it-yourself projects is that homeowners tackle them to save time and money and often end up spending more of both. Nevertheless, I am an inveterate home do-it-yourselfer, just like my dad.

When I explained this to my wife, the long-suffering Mrs. Funny Money, her response was, “Oh, so it’s a genetic defect.”

Mrs. Funny Money is not a fan of home projects. Her complaint is that these projects take too long and tie me up for weekend after weekend, plus they’re too messy and I take too long to get around to them.

This is a patently untrue libel. Once a man has vowed to his beloved partner-in-life that he will tile the backyard patio, he will do it, and there is no need for the woman to constantly remind him about it every six months.

One gripe I completely reject about home improvement projects, DIY or professional, is that homeowners will never recoup their investment. The newest survey from Remodeling magazine and the National Association of Realtors finds that the best I could do here in my hometown of Metro Detroit would be getting back 92.5 percent of the cost of a new garage door. Down the list at No. 10 is replacing a roof, which only pays you back 60 percent when you sell your home.

So, clearly, your best financial move is to re-roof your house with new garage doors.

Wait, no, your best financial move is to realize that you are going to get several years of use out of that new roof. You are, after all, the one living in your house and you have better things to do than constantly nail down blue tarps over your missing shingles and shuffle buckets around every room whenever it rains. Plus there’s the hassle of cleaning the mold and mildew off the kids.

One way around the whole resale equation is doing it yourself. By avoiding the costs of labor, profit and any mark-up on materials, you can close that gap between the nearly $20,000 loss you’ll take on a home office remodeling that costs, on average, $31,338.

That’s what I did the past two weekends with the backyard deck on our house. I myself felt the deck had taken on a pleasantly rustic patina until our neighbor, Jim, a retired remodeler and handyman, informed me that it was fungus, and that those tiny green yeasties were the only remaining structural element keeping this rickety mess from total collapse.

Is it time for my juice-box break?

Estimates to power-wash and stain the deck ranged around $600. “The materials to replace all the decking will cost you less than that,” Jim said. He agreed to help me on the job, which was actually a condition demanded by Mrs. Funny Money. Her exact words were: “Not without adult supervision.”

This helped me avoid the problems that can make a DIY project a financial loser. Any tools I didn’t have, Jim did, so I didn’t have to buy that stuff. If there was an iffy piece of the structure, he could judge whether it needed to be replaced or not. Having two people to lift heavy boards prevented a costly trip to the emergency room, as did such handy advice as, “You already tore out all the decking behind you so I wouldn’t take that next step back if I were you.”

Naturally, this deck replacement followed the No. 1 rule and prime directive of all home projects: “It always takes longer and costs more than you think.” So it did run over budget when we had to replace more boards than expected, and instead of taking one weekend, it took two. Fortunately, I budgeted more of both, which is the No. 2 rule.

Even with all that, the final cost for materials was less than the $600-plus estimated just to wash and stain the old decrepit deck, and we now have something that’s good for at least 20 years. Adding an honorarium for Jim’s labor, the final cost was less than one-tenth of Remodeling magazine’s estimate of nearly $11,000 to add a similar-sized new wood deck. And with a resale value of $8,700, the rebuilt deck will turn a profit for us whenever we sell the house.

Now that I’ve proven that do-it-yourself projects can be financially successful, I told Mrs. Funny Money that I’m tackling the next project on my list.

“What are you going to make,” she asked, sweetly.

Brian O’Connor is author of the award-winning book, “The $1,000 Challenge: How One Family Slashed Its Budget Without Moving Under a Bridge or Living on Government Cheese.”

According to Bankrate.com, these are the big things that can go wrong — and add costs — to home improvement projects you tackle yourself:

■Not taking out the required permits.

■Starting a job without the necessary tools and supplies.

■Inadequate preparation of the job site.

■Improper preparation of walls for painting.

■Working beyond your limits.

■Failure to get a clue.