O’Connor: Panic at the stock market? Not so fast

The market is long over-due for a correction, experts say, and U.S. economy remains sound

O’Connor: Panic at the stock market? Not so fast 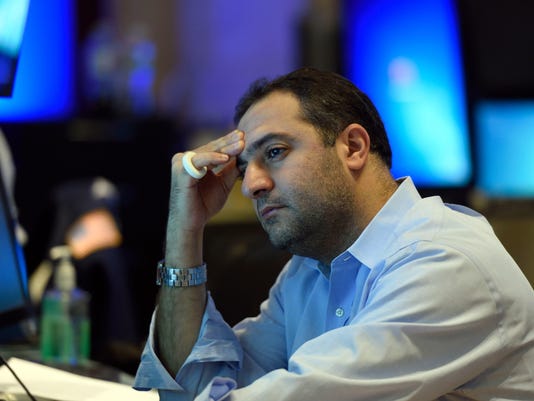 A trader on the floor of the New York Stock Exchange reads from his monitor August 24, 2015 in New York. US stocks finished sharply lower Monday, but far above the session's floor, following a bruising day in global financial markets sparked by mounting worries over the Chinese economy. US stocks have now dropped five straight days, but analysts warned of more turmoil possibly ahead. AFP PHOTO/DON EMMERTDON EMMERT/AFP/Getty Images(Photo: DON EMMERT / AFP/Getty Images)

After dropping more than 6 percent last week, U.S. stocks started Monday with a third straight trading day of frantic selling on investors fears of just about ... everything.

And even better is the fact that they’re right.

“People who are cashing out of stocks today could very well regret that in a week or two,” said David Kudla, CEO and chief investment strategist of Mainstay Capital Management in Grand Blanc. “This is not the time to do something about the correction.”

It’s a Wall Street cliche that, “The stock market climbs a wall of worry,” and there have been plenty of anxieties for investors in the six-and-a-half years of this historic bull market, which has the Dow up 142 percent, even after this correction. But stocks have swooned since 2009 on fears about Europe, Greece, the government shutdown, Europe, Greece, China, the Federal Reserve, Europe, corporate earnings, Greece (again), Europe (again), Greece (again), the Fed (again), corporate earnings, oil and a computer glitch at the New York Stock Exchange.

At different points, stocks dropped 15 percent in 2010, nearly 20 percent in 2011 — and came close to losing 10 percent twice during 2012. And yet, notes David Sowerby, portfolio manager for Loomis, Sayles & Co. in Bloomfield Hills, “Since the beginning of 2010, stocks have compounded at 13 percent a year.”

Adds Sowerby: “Looking at the last six trading days, I’ve seen this movie before. This isn’t likely to turn into 2008.”

The main concern for investors comes from China, where the world’s largest economy has been inflated for years by its government managers. A slowdown has been expected for years, but an explosive bubble on the Chinese stock market has now burst, raising fears about just how far China’s demand for products and commodities from the U.S. and other countries will fall. Or even that Chinese officials may not be able to control the descent to their planned soft landing.

But there have been plenty of other issues building since U.S. stocks last peak in May. Europe’s economic recovery is still weak, though Greece no longer seems a threat after years of crying wolf that it would exit the Euro partnership if it didn’t get better terms on an economic bailout. The U.S. recovery itself remains less than stellar, with employment weak even if the jobless rate is down to nearly 5 percent.

When it comes to whether the Federal Reserve will and should hike its main interest rate, forecasters are deeply divided. Some, for theoretical reasons, believe the Fed has played with fire by keeping rates too low for too long, while more practically minded economists point out that inflation is low, hiring remains weak and wages show little if any improvement. Whether the expected quarter-point hike comes next month or in the first quarter of 2016, it will be a mostly symbolic move to show that the U.S. economy is back to normal than any attempt to rein in runaway inflation.

A more immediate influence on stocks is the continued drop in oil prices, which has plummeted from more than $100 a barrel last summer to the lowest price since 2009 on Monday, down to less than $40 a barrel. That’s savaged the stocks of energy producers and related industries, notes Kudla of Mainstay Capital.

“If you look at S&P 500 for the first or second quarter, and you just take out the energy sector, the earnings look quite robust,” Kudla said. “Energy has dragged down the earnings of the index so much. It’s been a boat anchor on earnings.”

For individual investors, the recommendation is to sit tight and realize that we’ve become spoiled. The S&P 500 makes a 10 percent correction every 20 months on average, but until now we’ve haven’t had such a correction in more than four years. Meanwhile, U.S. economic fundamentals continue to improve, housing starts are up, employment is up and corporations are sitting on piles of cash.

“We investors have been pretty spoiled the last few years with low volatility, and these corrections are certainly more common than people think,” said Timothy Wyman, managing partner of the Center for Financial Planning Inc. in Southfield. “This latest correct is certainly nerve-wracking, but it’s common. This time it’s not different and a prudent, long-term focus will prevail.”

As for specific moves:

Don’t jump: That means into stocks, out of stocks or off any given building ledge. The worst thing you can do is to make a knee-jerk move with your money. If you have a financial plan, stick to it. If you don’t, get with a financial planner and make one. If your plan calls for stocks, this can be an opportunity to buy within the right asset classes — if that fits your plan.

“You never get wealthy on emotional investment trades, whether it’s buying or selling,” said Sowerby of Loomis, Sayles. “People get wealthy in the long term with discipline and taking advantage when assets are on sale.”

For most of us who hold mutual funds or exchange-traded funds, the fund managers have, if they’re any good, been anticipating weakness in China and looking for better opportunities months ago.

Get balanced: Regularly rebalancing your portfolio to your specific mix of stocks, bonds and other assets can add as much as 1 percent to your long-term gains. But rather than do it quarterly, Wyman of the Center for Financial Planning, recommends rebalancing after big market moves.

“Research suggests that if you rebalance when there are large swings you get the biggest bang,” Wyman said. “So this is an ideal time to be rebalancing. Some of that will mean increasing your stock allocation at this time. It’s hard to do, but we know it’s the right thing to do.”

Retirees: Make sure you have a bucket of adequate cash for at least the next year of living expenses in cash or cash equivalents, and a mix of bonds and stocks to protect against market downturns but allow you to safeguard your nest egg against from being eroded by inflation (whenever that shows up again). Exiting stocks altogether is dangerous when retirement for a couple can stretch to 30 years, but dropping bonds because they’ve done poorly in the past few years also means you’ve got no protection from big dips like today.

Near-retirees: This is why you need to be in bonds, too, as well as cash if you’re retiring in two years or less. The old rule of thumb is to subtract your age from 100, with that figure representing the percentage of investments you should have in stocks (some some planners use 110 now, to reflect longer life-spans). Approaching retirement is a crucial time to revisit your financial plan with a professional, such as a fee-only planner.

College investors: Unlike retirees, you have a finite span of years to cover, whether that’s four, six or an even longer stint in graduate school. For a toddler, a significant amount of a college portfolio should be in stocks, but if Junior or Missy is out back-to-school shopping for junior year of high school, a significant wad of dough should be in certificates of deposit or other cash-like instruments. If you have a 529 plan, the target-date funds offered will adjust the asset allocation as they near the maturity dates.

Young investors and workers: Stocks, stocks, stocks if you’re younger than 40. If you’re putting a regular chunk of your paycheck into a 401(k) plan, Individual Retirement Account or similar plan, you are engaging in a sophisticated strategy called “dollar-cost averaging,” and you don’t even know it. It means that as stock prices change, the $60 you set aside each week buys fewer shares when stocks are high, more shares when prices drop. This reduces your overall price of each share on average, and your profits when you eventually sell. You should be cheering — you’re buying cheap!

Can you sleep? Did you spend wee hours Tuesday staring at the bedroom ceiling while trying to decide what flavor of Little Friskies you’ll subsist on in retirement? Then perhaps the last six-plus years of the bull market have lulled you into thinking stocks go up, but not down. Revisit your investment plan and make sure you understand how it rides out the ups and downs of the market. If you don’t have a plan, let the churning butterflies in your gut flutter you directly to an experienced investment adviser or, better, financial planner.

And don’t worry too much. Even though the Dow is off 11 percent from its close last year, market forecasters all expect U.S. stocks to end the year up. But to get those gains, you’ll have to hang on for the rest of the ride.