Detroit's transformational year testament to confluence of leadership, choices made. 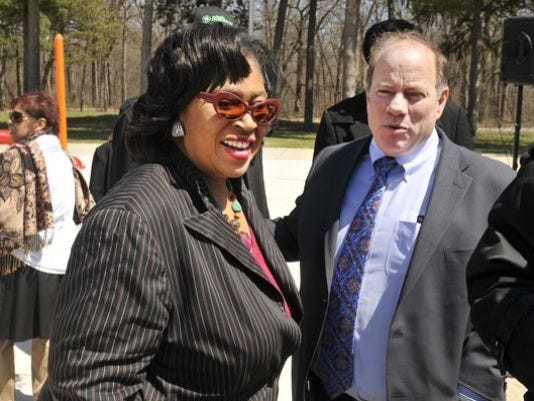 And, lo, in the closing days of a year marked by the largest municipal bankruptcy in American history, the call went out to all those not yet gone and making merry:

Who are the best in Michigan business and politics, exemplars of who we are in a city prematurely given up for dead?

There are many in this transformational year for Detroit, more positive vibe than negative whine, more refreshingly can-do than familiarly won't-do — all of it a testament to the confluence of leadership, circumstance and choices made.

Mechanic(s) of the Year: To the trio who engineered Detroit's historic bankruptcy with a lot of help from a lot of high-priced talent. Where would the city's Chapter 9 case be without U.S. Bankruptcy Judge Steven Rhodes' disciplined docket, Chief U.S. District Judge Gerald Rosen and his merry band of mediators, or Emergency Manager Kevyn Orr?

Still in bankruptcy, likely mired in years-long litigation to determine whether vested public pensions are, in fact, protected by the state constitution and whether the Detroit Institute of Arts' collection is held in public trust, as state Attorney General Bill Schuette argued.

Whatever your predisposition toward the city's bankruptcy, its necessity or the result, it is hard to overstate the seminal contributions of the many who worked harder than most folks realize to contain collateral damage to real people living real lives.

From union and pension fund leaders to heads of retiree committees, suburban officials to state lawmakers, the end result is a tale of realistic reckoning with the culmination of Detroit's downward financial spiral. Absent their leadership on the proposed settlements — and understanding of the alternatives — the bigger losers would have been the people they are expected to represent.

Financier(s) of the Year: To the more than a dozen foundations, the state Legislature and DIA donors who pledged the equivalent of $816 million to a "grand bargain" to backstop city pensions and protect the DIA's art under a new non-profit charitable trust.

Detroit's bankruptcy would not be over — not even close — without the new money injected into what was essentially an asset-less bankruptcy. The grand bargain helped avert a further impoverishment of Detroit's retirees, public employees and its cultural heritage; the result would have proven an indelible stain on an already tarnished city.

Disciplinarian(s) of the Year: To Ford Foundation President Darren Walker and Kresge Foundation President Rip Rapson. Without the conditions attached to the $225 million commitment from their two foundations — essentially demands that both the state Legislature and DIA donors contribute meaningfully to the grand bargain — there would not have been one. Period.

Too many do not fully understand the risk both leaders, as well as the heads of other foundations with names like Mott and Kellogg, Hudson-Webber and Davidson, took in pushing an unconventional idea through their staffs and respective boards. And in record time.

Diplomat(s) of the Year: To Detroit Mayor Mike Duggan and City Council President Brenda Jones. Faced with a bankruptcy they did not support and a restructuring plan they did not devise, the elected heads of the city's executive and legislative branches used their circumscribed roles to nonetheless move the city forward.

Whether this cooperative, can-do spirit was a tactical bow to political reality or a harbinger of the future will depend on what they do and how business-like they do it in the coming months and years. They should, however, understand just how much good will the changed tone is creating for the city in the wake of its bankruptcy.

Lawmaker(s) of the Year: To the two Democrats (John Dingell and Carl Levin) and two Republicans (Dave Camp and Mike Rogers) whose retirements from Congress are leaving the Michigan delegation with large holes to fill.

Partisans on both sides can find reasons to denigrate their longevity, service or political affiliation — and they will. But there is little argument that Michigan's clout will be diminished on both sides of the aisle when a new Congress convenes in January.

Chief executive of the Year: To Gov. Rick Snyder. Snyder's stewardship of Detroit's bankruptcy demonstrates a commitment to tackling tough problems his predecessors (from both parties) managed successfully to avoid. How he'll top that accomplishment in a second term, if that's possible, is unclear.

Honorable mention goes to General Motors Co. CEO Mary Barra, who stepped into the General's top job just weeks before an ignition-switch recall exploded, painting company management and key members of its engineering ranks as callous, incompetent or both.

She displayed an empathy and candor seldom seen in the top echelon of the global auto industry, including traditionally hide-bound GM. She embraced external criticism, understanding that the first step to correcting serious shortcomings is acknowledging them, publicly.

Best Lesson of the Year: The past need not be destiny. Decades in the making, Detroit's downward financial spiral appears arrested, $10 billion in debt erased or restructured. That's progress.

Daniel Howes' column runs Tuesdays, Thursdays and Fridays and can be found at http://detroitnews.com/staff/27151.