Howes: Ford bets future on rich past of pickups, SUVs

Howes: Ford bets future on rich past of pickups, SUVs 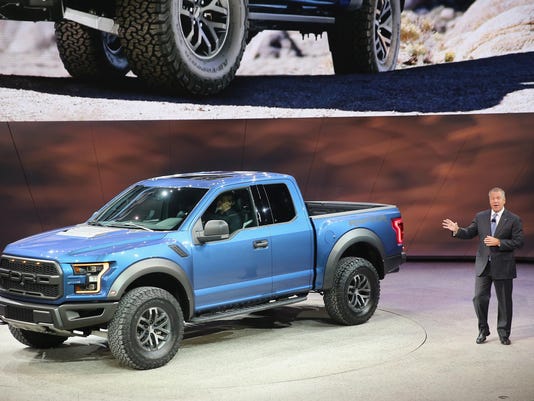 Dearborn — The Blue Oval has seen the future and it looks a whole lot like its past, a rich heritage in trucks, SUVs and performance vehicles.

Ten months after CEO Jim Hackett’s battlefield promotion to replace Mark Fields, Ford Motor Co. began Thursday to detail how it plans to strengthen the core business and improve its financial gearing amid an industry shift toward mobility, autonomy and electrification.

It starts by embracing market trends that favor Ford’s legacy of producing the industry’s best-selling pickup and the best-selling three-row SUV. An estimated 86 percent of Ford’s sales volume in the United States by 2020 will be pickups, a proliferating SUV portfolio and the industry’s broadest truck-based lineup of commercial vehicles. Lincoln, struggling to keep pace with the luxury pack, will field six new SUVs over time — two within the next two years.

All gas guzzlers all the time? Not quite. Every model will be available with hybrid gas-electric powertrains, recognition that fuel economy must continue improving. Theoretically that means Ford will offer customers hedges against rising fuel prices, further legitimizing electrified options slow to gain traction in the market.

Another imperative: coming to terms with the death of the Great American Car, a reckoning Ford has been slower than its rivals to embrace. In its “Ford Uncovered” spiel Thursday at the Product Development Center showroom in Dearborn, the automaker confirmed nothing about the futures of its car lineup.

It didn’t have to. Saying next to nothing delivers a message all its own: in coming years, three-box sedans with names like Fiesta and Focus, Fusion and Taurus, are likely to occupy much less space in Blue Oval showrooms and account for a lot less revenue in the quarterly numbers.

Ford is likely to eliminate at least two car models from its U.S. lineup, to be confirmed perhaps by the end of the year. The truth is, Ford can’t grow its North American portfolio to nearly 90 percent pickups, SUVs and commercial vehicles without trimming car models — and, no, Mustang would not be one of them.

“To some extent, they got way too dependent on cars,” said Joe Phillippi, president of New Jersey-based Auto Trends Consulting. “The real question is, how did you miss the SUV explosion? Everybody’s betting on crossovers and SUVs. They are still a truck company, no doubt about it.”

Only now Ford is admitting it, unambiguously. Telling in confabs like Thursdays is what’s not said — implicit criticism of restructuring not done in the product development process and the model lineup during Fields’ profitable three-year tenure, to name one obvious example.

Or that superstar CEO Alan Mulally’s strategy of small, medium and large versions of cars, trucks and SUVs didn’t position Ford so well for the unmistakable market shift to trucks and SUVs. The result: too many cars fewer people want and not enough profit-rich SUVs and pickups they do want.

Or the reason that Ford is partnering with Anhui Zotye Automobile Co. in China on small battery-electric vehicles and the Mahindra Group in India: Ford’s offerings in those major global markets generally are too big and too expensive to grow the automaker’s business in two countries it does not want to abandon.

In that sense, Ford appears poised to follow a different path than its crosstown rival. General Motors Co. bolted Russia, left India and sold out in Europe after 90 years. The Blue Oval aims to stay the course in all three and boost margins, even if it means recruiting a partner or two to remain relevant and to get smarter.

The wisdom of the path taken will be in the execution, especially the bottom line. As much as the promise of new products excites would-be customers, it’s the duller, behind-the-scenes moves in engineering and manufacturing that can fatten profits and change sentiment among investors and those who might be.

Roughly six months ago, Hackett issued a challenge to Hau Thai-Tang, executive vice president of product development and purchasing: restructure Ford’s product development process to shorten the time from sketch to showroom and cut costs in the process.

The result, says President of Global Operations Joe Hinrichs, is a 20 percent reduction in the costly process. Ford will shift from “platforms” underpinning families of vehicles to five “flexible architectures” the automaker expects to reduce costs, improve quality and increase efficiency. And a 25 percent reduction in plant changeover time should add $50 million to the bottom line.

“Speed and execution is really important,” Hinrichs said in an interview. “It is fair to say on our process — which had become collegial and consensus-building ... it wasn’t clear who got to make the decisions. There’s clarity now in who makes what decisions and how we execute.”

There should be. After more than a year of relative turmoil, Ford’s management needs stability and a clear line of thinking to negotiate fundamental, often contradictory, change in the transportation space. Thursday’s product preview is a step in that direction, albeit just the next 24 months out.

Credit the product planners in Dearborn for recognizing that emotion still matters in the business. The next-generation Explorer will be offered in a performance ST model, joining the Edge ST unveiled at the Detroit auto show. A hybridized Mustang, coming to a showroom near you, will be available, too, as well as the most powerful Mustang ever, the GT500 with a punch of more than 700 horsepower.

And left unremarked is Ford’s strategy to play and win in the race for supremacy in self-driving cars. It’s no accident GM chose Thursday to say it would build its Cruise AV autonomous car and accompanying self-driving modules in southeast Michigan.

The competitive implication: What about this, Ford? It’s a fair question, and the Blue Oval will need to answer it soon enough — because that’s part of its future, too.