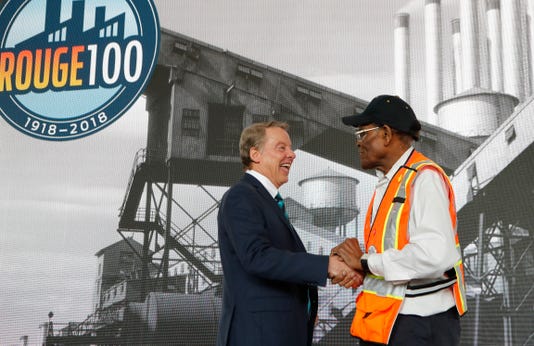 Automakers are delivering a message to President Donald Trump on his beloved tariffs: We told you so.

Ford Motor Co. CEO Jim Hackett used a Bloomberg Television interview this week to remind the White House that levies on steel and aluminum “took about $1 billion in profit from us — and the irony is we source most of that in the U.S. today anyways.”

“Our business runs a lot better when we have clarity,” he told a media scrum Thursday. “Our lead times are long, our capital intensity is such that our business is at its best when we have certainty.”

Tell that to the president. He uses chronic uncertainty as a negotiating tactic in a dizzying array of trade talks with Canada and China, Mexico and South Korea, Japan and the European Union. His response at his 81-minute news conference this week in New York?

To ignore the collateral damage, to hail the recovery of the American steel industry (if not the rising prices), and to promise, yet again, “to tax the cars that come in. We will put billions and billions of dollars into our treasury and frankly, we’ll be very happy.”

Maybe not so happy for the people whose livelihood depends on a robust U.S. auto industry, suggests Comerica Bank in its latest Michigan Index. Tariffs and the prospect of more to come are beginning to exert a perceptible drag on the state, roughly five weeks before mid-term elections conclude and the 2020 presidential campaign begins.

“With the state’s auto industry either at or post peak, and trade disruptions adding to economic uncertainty," Comerica says, "the Michigan economy is cooling, but not contracting. Uncertainty about international trade is an ongoing negative factor for many Michigan businesses.”

Added PNC Bank in its new Economic Outlook: "Michigan's economy continues to rely heavily on the automotive industry, particularly in Metro Detroit. Auto sales are expected to be strong, but a trade war could significantly hurt auto sale projections. The housing market throughout the state will remain robust, with high prices and low inventory.

"Michigan businesses will continue to compete for skilled employees in one of the nation's tightest job markets. Overall, Michigan's economy may lose a little steam, but the outlook for the remainder of the year is stable."

That's the good news. The bad news is that the state's driving auto industry still can't get a fix on the president's trade end-game — aside from assurance the Trump administration has no intention of bargaining away the 25-percent tariffs on imported trucks, a boon to the bottom lines of Detroit's rich pickup business.

Still, casualties are beginning to mount. Already Ford has killed plans to import its next-generation Focus Active crossover to U.S. showrooms from China. General Motors Co. is seeking a tariff exemption for its midsized Buick Envision SUV, built in China.

What's next? Fiat Chrysler Automobiles NV builds its trademark minivan in Windsor; GM and Ford import finished vehicles from Canada for sale to American consumers; Toyota and Honda, to name two foreign rivals, do the same.

Let's remember: this is the guy who wouldn't be president but for the industrial heartland he so assiduously cultivated (and his Democratic rival mostly ignored). This is the guy who welcomed the CEOs of the Detroit Three into the Oval Office, listened to their concerns, gave the impression that for the first time in a long time Detroit had a friend in the White House.

Now? Not so much. In slapping tariffs on the imported aluminum and steel to help U.S. producers (who employ a lot fewer folks than automakers and their suppliers), Trump's tariffs are bleeding profits from the automakers paying higher prices for that metal. And if he finally makes good on this threat to tax cars, trucks and SUVs imported into the United States, we'll be in new territory.

Disentangling a global supply chain, even one constructed between the U.S, Canada and Mexico, would be a financially painful and complicated undertaking. And it wouldn't come without hits to employment — far sooner than any new investments that might accrue to the United States because of the new tariffs.

Tariffs are taxes levied to change behavior and punish adversaries, not friends. So far in Detroit, they're doing more of the latter than the former.