Reality intrudes. This isn't what Trump touted two years ago when he promised the return of auto jobs in Michigan and Ohio. 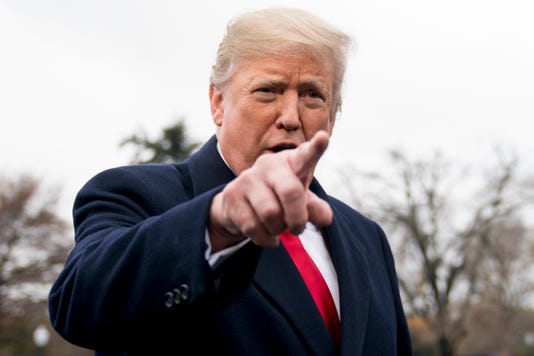 On Tuesday, he threatens to revoke GM’s electric-vehicle credits, though he can do no such thing to a program codified by Congress into law. On Wednesday, he threatens (again) to impose 25-percent tariffs on imported cars even as he justifies longstanding tariffs on imported trucks. And Ford Motor Co., vowing its own sweeping restructuring, has yet to detail plans the president probably won't like.

Give Trump another 24 hours, and he’ll be backing proposed legislation from Ohio’s Democratic senator (and potential 2020 presidential candidate), Sherrod Brown, to use taxes on foreign profits to give customers $3,500 discounts on vehicles made in America. That includes Fords in Kentucky, Jeeps in Michigan, Hondas in Ohio and Toyotas in Indiana.

This isn't what candidate Trump envisioned when he barnstormed the industrial Midwest two years ago promising the return of auto jobs in Ohio and Michigan. Or when he vowed that his beloved tariffs on foreign steel, aluminum, even cars and trucks would restore the Arsenal of Democracy to its former glory.

Ain't working out that way. Steel and aluminum tariffs raise costs for automakers, even those who source all their U.S. needs from U.S. suppliers. Rising interest rates make new cars, trucks and SUVs more expensive to consumers. Continuing threats of trade wars with Canada, Mexico, China and the European Union make investors and auto executives jittery — they see the short-term pain, but not a path to long-term gain.

With apologies to King Canute who believed he, alone, could command the oceans, the president is learning he, alone, cannot command the auto industry sprawling across Trump country. His response: threats to use the power of the federal government to punish GM and, by implication, any other automaker that deviates from Trumpian orthodoxy.

Ever since GM dropped its restructuring bomb Monday, Trump and his like-minded critics remind that GM wouldn't be here but for the intercession of American taxpayers, that GM accordingly owes a continuing debt. Apparently terms of that debt include ignoring in perpetuity changing market forces and technological advances that could leave GM behind.

Or not. Producing cars that growing numbers of consumers aren't buying is not a recipe for success. It's a recipe for yet another failure and more recriminations of the morons in Detroit, even if pulling back from that sector does, indeed, cede a diminishing pool of customers to Asian competitors.

Besides, the underlying reality of what GM is proposing is not necessarily as grim as the top-line numbers and the overheated rhetoric initially indicate — especially for the 3,300 hourly workers potentially affected by the end of production in their plants.

It's no accident GM is choosing to wind down production in Detroit/Hamtramck, Warren transmission, Baltimore and Lordstown, Ohio, next year. It's a national contract year, and the national UAW-GM contract bars the automaker from closing or officially idling a plant during a contract absent a major economic crisis.

GM is not facing one right now. But it is facing steadily declining demand for cars (as most automakers, including Asian rivals, are) at the same time it needs to ramp up development and production of electric vehicles, EV-powered autonomous cars and the components required for electric propulsion systems. And GM needs to pay for it all, to boost cash flow, with more sales of more variations of the profit-rich trucks and SUVs customers want.

The plants are not closing before Christmas. Some or all of them may not close at all, pending contract talks that will be all about allocating new product to "unallocated" plants. That's not a made-up word: it's a deliberate signal to union bargainers and rank-and-file members who know product allocation is the mother's milk of any auto plant.

Without it, a plant dies. Absent a deep recession, a lesson of bargaining years past is that both sides use contract changeovers to pursue what each side wants: companies seek work-rule changes and compensation formulas that enable them to maintain or improve their competitiveness. And the union bargains to secure as much product investment in as many sites as possible, improving wages, benefits and profit-sharing in the process.

The contours of GM's restructuring now are known. But the actual content will take months to develop — and may prove less dire than it appears this week.