Detroit's three automakers are poised for the most tumultuous year since two of them emerged from federally induced bankruptcy a decade ago. 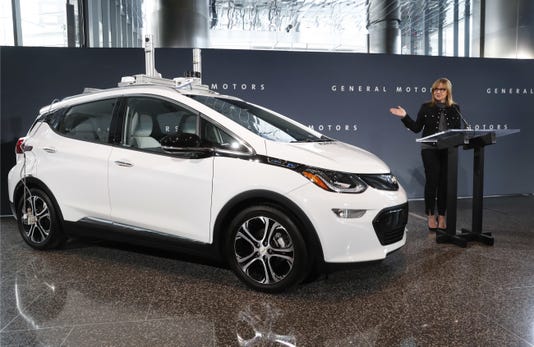 General Motors Co.'s electric Chevrolet Bolt, pictured alongside CEO Mary Barra, is expected to be the platform for the automaker's push into self-driving cars -- a transformational technology that threatens the assumptions of the traditional industry and the people who depend on it.(Photo: Paul Sancya, AP)

Happy New Year: Detroit's three automakers are poised for the most tumultuous year since two of them emerged from federally induced bankruptcy a decade ago.

Expect the year ahead to bring confrontation and change. CEOs charged with navigating Old Economy manufacturers through the auto industry's greatest transformation since the moving assembly line inevitably will clash with paternalistic tradition and its implied obligation. That's especially true for Fiat Chrysler Automobiles NV and General Motors Co., each rescued with money from the American taxpayers.

Within weeks, GM is expected to complete a winnowing of its salaried workforce, a reduction of 8,000 jobs that could include as many as 6,000 involuntary layoffs. And five North American plants, including two in southeast Michigan, will be idled in the new year — the first step toward a possible closure.

Within months, Ford Motor Co. is expected to finally deliver details on its longtime-coming global restructuring. The Blue Oval, too, is likely to eliminate salaried jobs even as it builds out a Corktown campus anchored by a renovated Michigan Central Depot and ramps hiring for next-generation technology jobs in the Auto 2.0 spaces of mobility, autonomy and electrification.

And FCA, under its publicly invisible new CEO, Mike Manley, is preparing to convert its mothballed Mack II engine plant in Detroit into a second assembly plant for the next-generation Jeep Grand Cherokee. The move would cushion the blow from GM's plan to idle its Detroit-Hamtramck Assembly Plant, unambiguously signaling the consumer shift to SUVs of all sizes from traditional three-box sedans.

Change? You bet. Uncomfortable, discordant change that will be visited on the Motor City amid the good times of low unemployment, positive economic growth and solid bottom lines for the automakers and many of their major suppliers. It's not supposed to work like this, which means the politicians and union leaders already denouncing GM's restructuring plans are just gettin' warmed up.

The new year will give them a whole lot more to lament and criticize. This town's defining auto industry is facing existential challenges greater than the oil shocks of the '70s, the Japanese arrival in the '80s and '90s or the bankruptcies of 2009. Each of those in their own way posed threats to the core auto business, but none of them proposed to radically redefine automotive technology, investment and ownership.

Auto 2.0 does. And its enormous capital demands in an industry accustomed to deploying huge amounts of capital are shattering assumptions driving the American auto industry for roughly the past 50 years. Fielding products in most segments and in most regions of the world is no longer required if you can't make a profit doing it.

The outraged reaction to GM's restructuring plans — from President Donald Trump and members of Congress, to community leaders and union officials on both sides of the border — shows just how wide the gulf is between the big shots navigating the change and people affected by their decisions.

Skyrocketing gas prices and the effect of foreign competition on sales most folks understand because their impact is viewed through a familiar lens. How the likes of Google-affiliated Waymo, Apple Inc. and Elon Musk's Tesla Inc. threaten to reshape personal transportation as we know it is less apparent to folks firmly rooted in the assumptions of the Auto 1.0 pioneered by Henry Ford and his contemporaries.

Into the maelstrom steps the United Auto Workers, preparing for national contract talks in late summer with Detroit's automakers. With a federal corruption investigation looming over current and former members of the union's leadership, the UAW will face a difficult challenge: rewarding its members for helping deliver a long run of profitability even as they limit potential damage from the market's rotation away from cars and the automakers' moves into advanced technology and a whole new kind of employee.

The risk of confrontation is not insignificant. And if President Trump's trade wars with China, the European Union, Canada and Mexico (over steel and aluminum tariffs) remain unresolved, sap demand and raise yet more costs, pressure only will intensify on both management and union bargainers because the economic landscape remains uncertain.

None of it will be boring. And the outcome will begin to answer a fundamental question that has dogged the Detroit Three since GM and FCA emerged from bankruptcy nearly a decade ago: can they manage their respective ways through a thicket of tough competition amid an economy expected to slow this year and next? We're about to find out.