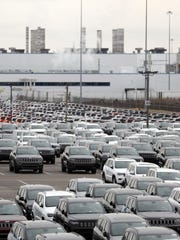 Auto 1.0 still matters in this town.

Fiat Chrysler Automobile NV’s plan to invest $4.5 billion in metro Detroit plants and create 6,500 jobs is yet more evidence that building cars and trucks remains a backbone of the regional economy. It bridges the partisan divide, fuels optimism, shows real consumers spending real money for the foreseeable future want metal they can drive themselves.

That's because automaking still provides jobs — whatever the hype touting the coming revolution of mobility, autonomy and electrification. Those are real, too, but the growing consensus is their mass adoption is not likely to be realized as soon as predicted.

FCA’s move vindicates late CEO Sergio Marchionne’s call three years ago to abandon small cars in the United States and to weight the portfolio more heavily to SUVs and trucks. It underscores his successor’s deft management of the Jeep and Ram brands before Mike Manley became CEO just days before the boss's death last July.

It also validates the vision that recognized the automotive gems buried in the bankrupt hulk of Chrysler Group LLC — and shows just how wrong the smart people in the Obama auto task force turned out to be. They insisted ol' Sergio and the team deliver fuel-sipping small cars in exchange for gaining control of Chrysler's assets even though the biggest, most profitable prizes turned out to be Jeep and Ram.

Instead of trucks and SUVs, they envisioned a future of econo-boxes, hybrids and electric cars as far as the eye could see, driven by $4-a-gallon gas and the United States' (self-imposed) inability to produce its own energy. Marchionne & Co. saluted, got the company, delivered the small-car promise and then followed the market's lead.

Imagine that. And one of the largest beneficiaries is metro Detroit generally, one of the city's east-side neighborhoods specifically. In less than six months, two of Detroit's three automakers have confirmed major jobs- and revenue-producing investments in Detroit neighborhoods, compelling evidence that the city's reinvention finally is rooting outside downtown.

The Italian-American automaker wouldn’t be moving ahead with shaping a new assembly operation from engine-plant assets on the city’s east side, wouldn’t be investing billions more in its Jefferson North and Warren assembly plants, without hard evidence of increasing demand for its growing Jeep and Ram lineups.

The automaker wouldn't be adding a three-row Grand Cherokee in Detroit, or a larger Jeep Wagoneer and Grand Wagoneer in Warren, if the brand born from the World War II-era military wasn't proving to be arguably the most valuable American auto brand on the planet.

There are few ways better to burnish brand cred than assembling the metal in the heart of the former Arsenal of Democracy. By its actions, FCA is saying that authentic Jeeps for the North American market should come from the industrial Midwest — Ohio, Illinois and Michigan — and that metro Detroit will be one of its most critical hubs.

It's hard to overstate the symbolism and the economic import here. As rival General Motors Co. roils communities and the political class in three states and Canada with plans to potentially close three assembly and two transmission plants to reduce excess plant capacity, FCA is adding more to meet surging demand.

The net-gain to the region: nearly 5,000 tax-paying jobs, assuming the endangered GM jobs at D-Ham and Warren Transmission are absorbed by select plants in Flint, Tennessee, Indiana and Texas.

This is indisputably good news in a town bracing for more bad news from GM and Ford Motor Co. Each is reckoning with plant capacity challenges, bloated lineups of slow-selling cars and too many people in the wrong jobs for a future expected to deliver tech-driven change.

The difference: FCA already reckoned with some of those same challenges, and Detroit is reaping the benefit for a change.