Detroit — Shahid Khan loves this town and its auto industry, but it has a problem: construction is too expensive, he says, and it's because "union costs" are too high.

"The cost of construction is among the highest in the country," Khan, the CEO of Flex-N-Gate Corp., told the Detroit Economic Club on Tuesday. "It's more than it is in midtown Manhattan and double what it is in Chicago. There is no other way of putting it — it's union costs." 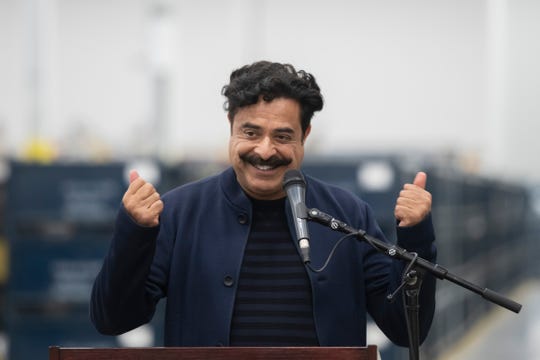 Shahid Khan, CEO of Flex-N-Gate Corp., is a big booster of Detroit and its "mojo." But he says the city's construction costs are too high and emerging as a disincentive for future investment. (Photo: David Guralnick, The Detroit News)

And if he didn't own outright the global auto supplier with $8 billion in annual revenue employing 24,000 people in 66 facilities around the world — including a new one on Detroit's east side employing nearly 700 — he joked that he might have lost his job after agreeing to build a pricey new plant in the city. But he doesn't sound like a man with regrets.

Khan's Detroit plant makes steel assemblies and interior plastic assemblies for Ford Motor Co.'s Michigan Assembly in Wayne. He says Mayor Mike Duggan's leadership is an asset to city a lot of America gave up for dead. And he loves Detroit's "mojo," which is why he didn't miss a beat before offering a tough-love diagnosis in a union town.

He would know. At the urging of Ford Executive Chairman Bill Ford, Khan heeded the call to invest in the city. His new plant is part of a building wave of automotive investment in Motown that includes Ford's renovation of the Michigan Central Depot in Corktown, Fiat Chrysler Automobiles NV's Mack Avenue Jeep plant now under construction and General Motors Co.'s planned retooling of its Detroit-Hamtramck Assembly to build electric trucks.

But Khan's warning — long echoed by officials of Dan Gilbert's real estate arm, Bedrock Detroit, and reflected in the renewed debate around state tax incentives for major projects — is worth heeding. And so is the fact that qualified labor to work on major projects in the city is proving hard to come by.

"It's going to take a whole series of strategies," Mayor Mike Duggan, an unambiguous fan of Khan and his investment in Detroit, wrote in a text message after emceeing Khan's appearance at the Economic Club and touting Flex-N-Gate's commitment to the city. "But everyone is pulling together. The issue is the lack of skilled trades workers in the Detroit market.

"Detroit at Work is running several apprenticeship training programs and helped raise $10 million for skilled trades ... program at Randolph School. The carpenters' union (is) building a huge training center in Detroit" — a $30 million facility expected to train as many as 1,500 students a year.

In March, at a news conference with the Michigan Statewide Carpenters and Millwrights Joint Apprenticeship and Training Fund, the mayor acknowledged that the high cost of construction "is becoming a real problem for us. If there is one thing that can derail the speed of Detroit's recovery, it's the cost of construction. We've got enough work for the next five or 10 years. We need to be training Detroiters to do it."

Everyone has a role to play — unions to acknowledge the cost structure, educators and trades-people to devise training programs, non-profits and the news media to publicize the imbalance between the supply and demand for labor, business leaders to tell the truth about how disincentives can weigh on investment decisions in the city.

To be clear: if construction costs, including the cost of labor, are legitimate deal-killers, Flex-N-Gate wouldn't be minting parts for Ford in the city; the Blue Oval wouldn't be renovating the historic train station into an anchor for its next-generation transportation campus in Corktown; Fiat Chrysler wouldn't be building the city's first assembly plant in nearly 30 years.

But in a city whose defining industry lives or dies on its ability to compete with foreign rivals, Detroit can't afford to price itself out of a market that could extend the sustainability of an economic reinvention whose staying power is not guaranteed — not yet, anyway.