If convictions, implication of two past presidents and threat of federal intervention don't equal crisis of legitimacy for today's UAW, nothing does

Now that Rory Gamble's officially president of the United Auto Workers, he might consider putting a new sign on his office door. It would read "Burning Platform."

Because that's what the union's governing International Executive Board and its past two presidents are bequeathing the 64-year-old UAW stalwart-turned-president who admits his mission is "trying to save my union," as he told The Detroit News just before the Thanksgiving holiday. 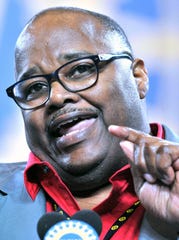 With the federal crackdown on UAW corruption charging 13, convicting 11 (including two former vice presidents) and implicating former presidents Gary Jones and Dennis Williams, there's an argument that things couldn't get much worse for the 84-year-old union, a cornerstone of the modern American auto industry.

That would be wrong. U.S. Attorney Matthew Schneider, the Justice Department's top prosecutor in Detroit, used a recent interview with The News to signal that he's so far unimpressed with Gamble's cut at reform, at the union's version of cooperation with federal authorities, and how the half-measures could move the feds to consider a takeover of the UAW.

The rare, and very public, statement by a federal prosecutor is no accident. It's a calculated signal to Gamble and his evolving management team, an invitation to re-evaluate the UAW's notion of cooperation and shift the dialogue into a higher, more productive gear.

If the mounting pile of convictions, the likelihood two past presidents could be indicted, the threat of federal intervention and the damaged credibility of leadership don't add up to a crisis of legitimacy for today's UAW, nothing else does. Combined, they're a huge "burning platform" Gamble and those ready to support real, quantifiable reform could wield to shift a culture that has lost its moorings.

The union under Gamble is off to a more encouraging start — centralizing financial operations, hiring an external auditor, tapping Deloitte LP to assess the UAW's accounting and financial processes at Solidarity House, all regional offices, all political action committees and the Black Lake Education Center in northern Michigan.

If wrongdoing is found, the UAW's first call should be to Schneider's office. Unlikely for the union's butt-covering culture? Sure — and that's exactly the point. If Gamble wants to hand his successor a "clean" union at the 2022 convention, if he wants to reorient leadership priorities toward serving members, if he wants to end the legal torment, he and the executive board need to demonstrate that "zero tolerance" aren't two hollow words in a press release.

Otherwise, they're wasting everyone's time. Everyone, that is, except Team Schneider and the local office of the FBI. They'll interpret insincere reform efforts as signals the hidebound union is incapable of what Gamble calls "self-governing" — just like they did when leadership replaced Williams with Jones, signaling defiance instead of contrition.

There's precedence in this town for such a mea culpa. Just weeks after Mary Barra became CEO of General Motors Co. five years ago, an ignition switch crisis linked to dozens of deaths exploded into public view, imperiling the automaker's revival story and multiplying its potential liability.

One response pushed by Barra and GM's directors: an independent investigation led by a former U.S. attorney, Anton Valukas, that Barra ordered released to the public. And, armed with its embarrassing findings, she led a town hall meeting (monitored in real-time by the news media) to sharply criticize an insular GM culture that enabled the crisis.

It was a stunning set of admissions, unlike anything I'd heard from a GM CEO in some 20 years of covering the company around the world. And it's exactly what GM's "frozen middle" needed to hear, conviction from the new boss giving insiders a choice: be part of the solution or be gone.

That's how cultures change — when people do, when bad behavior is neither rewarded nor tolerated, when the product being sold (an SUV or membership in one of the nation's most influential unions) is positioned to benefit the customers, not the people in charge who bend the rules to suit their self interest.

Yes, I know: skeptics are rolling their collective eyes, saying it simply is not possible for more than 80 years of accumulated culture to change enough, broadly enough, to shift the arc of the union's future. And if past is prologue, if the UAW's famous resistance to economic change is an accurate harbinger, the skeptics may well be absolutely right.

But Gamble should know this: if he doesn't clearly signal the end of the status quo — and back it up with unambiguous, consistent action — his presidency will end as quickly as it started. And the UAW will slide deeper into irrelevance, with only its leaders to blame.