Auto reveals all about speed, power

Auto reveals all about speed, power 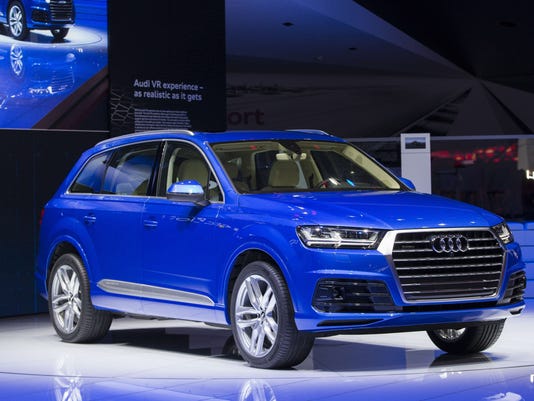 For auto consumers, 2015 is off to a rousing start, with a dose of new supercars, several big advances in electric/hybrid cars and fresh progress in infotainment and driver aid systems.

Several years ago pundits were predicting that high performance cars would fade away as ever more demanding fuel economy and emissions regulations took their toll.

Apparently Ford, Cadillac and Acura, Honda’s luxury division, were not listening as all three brands have revealed blisteringly fast and powerful new models.

Ford’s GT is a thinly disguised race car aimed at recapturing the glory of Ford’s first win 50 years ago at the famed French endurance race, Le Mans. Cadillac slotted the fire-breathing 640 hp V-8 from the Corvette Z06 into the CTS-V and has offered up a comfortable 200-mph sedan. And Acura has finally unveiled the production version of an all-new hybrid NSX sports car, a ground-breaking model it last sold 10 years ago.

All three cars will sell in small numbers but their manufacturers hope these showroom magnets will attract consumers and build sales overall.

Even with plunging gas prices, the focus is still on electric and hybrid cars because fuel costs are expected to rebound and looming fuel economy requirements will force automakers to sell more electrified vehicles of various types.

General Motors is rising to the occasion with the introduction of the newly designed Chevrolet Volt extended range hybrid. Design and engineering refinements give the 2016 Volt more mainstream exterior styling, a greatly improved interior and a 50-mile battery only range, up from 38 miles.

While the Volt ups its game significantly, the intriguing newcomer from Chevy is the Bolt. This pure electric concept car is reported to be bound for showrooms in 2017 and combines a sharp looking compact hatchback design with a 200-mile range battery and price in the low $30,000-range after government incentives. The Bolt’s compelling design, decent driving range and relatively affordable price could help give Chevy a commanding position in the emerging market for electric cars.

Automakers are moving fast toward the era of the fully autonomous car, with impressive recent demonstration exercises from top German brands including Audi and Mercedes-Benz. Along the way, some of the advanced driver-assist technologies are being introduced in today’s cars. Though some enthusiasts may balk at the proliferation of perceived “nanny” systems, in most cases these technologies do a great job of improving the safety of modern cars.

One example is to be found in Audi’s all-new Q7. A three-row crossover vehicle with a beautifully executed new interior design, the 2016 Q7 offers a broad array of enhanced infotainment and safety systems. Q7 buyers will enjoy an advanced digital dashboard, better integration of their smart phone and other devices and neat convenience features such as traffic light monitoring. This Q7 system will shut off the engine while the vehicle is waiting in line at a red light, and then restart when the light turns green. Hopefully such a system will help alert waiting drivers that it’s time to stop texting (or whatever else they are doing) on their phones and prepare to move.

In concert with Audi, sister brand Volkswagen has presented the Cross Coupe GTE concept, the latest iteration of the company’s coming midsize, three-row crossover. When it arrives in showrooms in 2017, VW hopes to attract consumers in the popular crossover market segment with an offering that will outpoint the competition in terms of design, engineering, convenience and safety features.

Finally, kudos go to Buick for unveiling one of the most beautiful flagship sedans to emerge from Detroit’s automakers in many years. The Avenir concept recaptures the elegant spirit of Buick’s heyday and speaks to the future of a brand that is fast building its strength both in the U.S. and China.

John McCormick is a columnist for Autos Consumer and can be reached at jmccor@aol.com.