Health care costs rise again, and the burden continues to shift to workers

Average deductible for an employer-provided health plan surged nearly 9 percent in 2015 to more than $1,000

Health care costs rise again, and the burden continues to shift to workers

Unaffordable deductibles are also emerging as a major issue for health plans being sold on marketplaces created by the Affordable Care Act.(Photo: Don Ryan / AP)

American workers saw their out-of-pocket medical costs jump again this year, as the average deductible for an employer-provided health plan surged nearly 9 percent in 2015 to more than $1,000, a major new survey of employers shows.

The annual increase, though lower than in previous years, far outpaced wage growth and overall inflation and marked the continuation of a trend that in just a few years has dramatically shifted health care costs to workers.

Over the past decade, the average deductible that workers must pay for medical care before their insurance kicks in has more than tripled from $303 in 2006 to $1,077 today, according to the report from the nonprofit Kaiser Family Foundation and the Health Research & Educational Trust.

That is seven times faster than wages have risen in the same period.

By comparison, workers’ wages increased 1.9 percent between April 2014 and April 2015, according to federal data analyzed by the report’s authors. Consumer prices declined 0.2 percent.

Raising deductibles and co-pays has traditionally been a way for employers to keep premiums in check.

And the new report shows that premium growth remained modest in 2015.

That is down nearly 1 percent from 2014, marking the first time that the survey has documented an absolute decline in workers’ share of premiums.

By comparison, employees’ share of health insurance routinely shot up by double digits in the early 2000s. 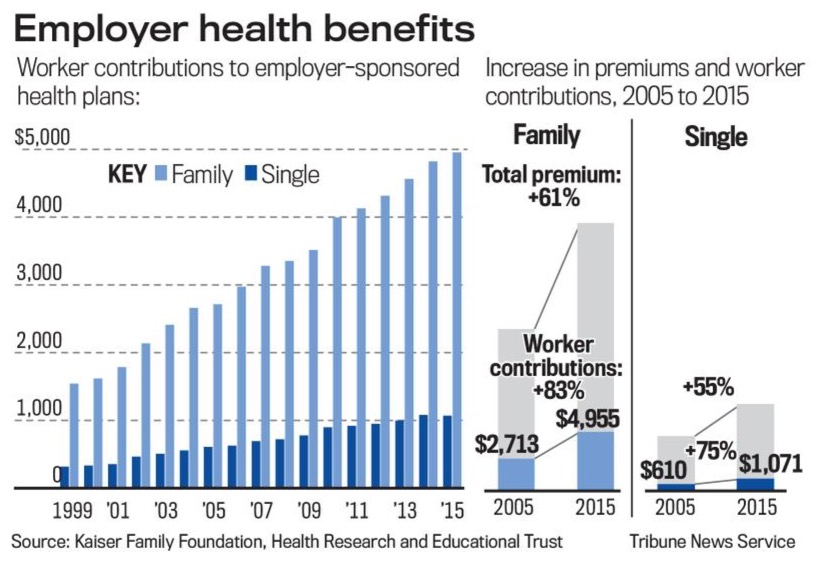 Businesses continued to pick up the bulk of the cost of health coverage for their workers, paying more than $5,000 on average for a single plan and more than $12,500 for a family plan.

Employers’ rising health costs are often singled out as a cause for stagnant wage growth in recent years, as businesses have put money into health benefits that might otherwise have gone to workers’ paychecks.

There is also growing evidence that the steep rise in deductibles and other out-of-pocket expenses such as co-pays are preventing workers from benefiting from the overall slowdown in health care cost growth.

A recent report by the Center for American Progress, a left-leaning Washington think tank, showed that employers are largely pocketing savings while passing along higher premiums and out-of-pocket costs to workers.

Unaffordable deductibles are also emerging as a major issue for health plans being sold on marketplaces created by the Affordable Care Act.

The marketplaces, now in their second year, were designed to help people who don’t get health plans through an employer.

Most of the nearly 10 million people in marketplace plans qualify for subsidies to offset their premiums, but deductibles in many plans are thousands of dollars.

“Deductibles are a big problem for consumers,” said Peter Lee, executive director of Covered California, the largest state marketplace in the country. Covered California now requires health plans to exempt some office visits from deductibles so consumers aren’t discouraged from getting necessary care.

The average deductible for a silver plan on marketplaces nationwide this year is more than $2,500, according to other research by the Kaiser Family Foundation.

Beyond costs, the new report contains more encouraging news about the endurance of employer-provided coverage, as 57 percent of employers reported offering benefits, from 2014.

That number has been closely watched, as critics of the Affordable Care Act had charged that many businesses would begin to drop their health plans when the health law began offering Americans guaranteed coverage.

As has long been the case, many more large businesses provide health benefits, with 98 percent of firms with 200 or more employees offering their workers at least one health plan.

This year, employers with at least 100 full-time workers will have to provide benefits or pay a penalty.

The requirement will apply to employers with at least 50 full-time employees in 2016, though Republicans and Democrats are working on legislation that could alter this so-called employer mandate.

The survey also provided more hints about the potential impact of another provision of the Affordable Care Act.

Starting in 2018, employers with particularly generous health plans will be subject to a new excise tax, known as the “Cadillac tax.”

The new report indicates that about 1 in 5 large employers offer at least one health plan that would be subject to the new tax. And 13 percent of large firms offering benefits have already taken steps to avoid the tax, including switching to less generous plans.

That could be more bad news for employees.

The tax, the last major provision of the 2010 law to go into effect, is fueling growing opposition from major business groups and labor unions, many of whose members have bargained for better health benefits in lieu of wage increases.