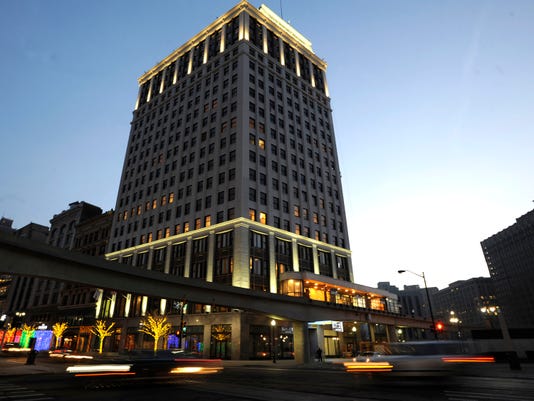 Detroit — The facade of a Grand Circus Park skyscraper was illuminated for the first time in years, ushering in a glittery new life for the historic building after a $92 million renovation.

A big, makeshift electrical switch was turned on from a small stage in Grand Circus Park on Monday evening, lighting up the 19-story David Whitney Building, which originally opened in 1915. It closed in 1999 but it reopens for business later this week.

The building now houses an Aloft "boutique" hotel with 136 rooms, and 105 apartments starting at $1,000 a month on floors 10 through 18. The first hotel guests arrive Thursday, and some apartment tenants are expected to move in by the end of the year.

The Whitney's facade will be a luminous addition to downtown's skyline, said David Di Rita, one of the principal developers behind the project.

"We're going to up-light the façade at night," Di Rita said. A reproduction of the original rooftop sign with the building's name also will be illuminated.

On hand for the Monday lighting ceremony were descendants of lumber baron David Whitney.

The $92 million upgrade is one of the more expensive overhauls of a historic Detroit building. The Westin Book-Cadillac took about $200 million to renovate.

Di Rita credits downtown's rising fortune, particularly rental apartment rates that are steadily increasing and a healthy hotel market. In the past year or so, residential rents downtown have begun to get close to $2 a square foot, a long sought after goal by developers.

That translates into more money to restore landmarks like the David Whitney Building. Beyond the facade, the four-story interior lobby — the Grand Rotunda, with its vast skylight and large gold clock — has been replicated to its original grandeur. So have many other details of the building.