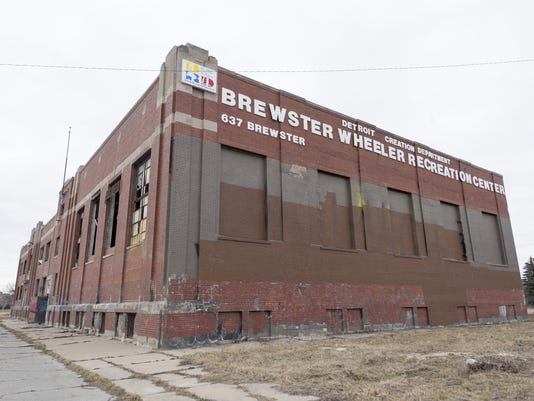 Restaurateurs Curt Catallo and K.C. Crain Jr. say a start date for their plans for the Brewster Wheeler site is contingent upon approval from the city. The housing and retail portion has moved about six blocks southwest.(Photo: David Guralnick / Detroit News, file)

One part of the $50 million plan to redevelop the Brewster Wheeler Recreation Center in Brush Park is proceeding without the other.

Detroit City Council will vote Tuesday on whether to sell the the recreation center property so developers can convert Joe Louis’ old boxing gym into a restaurant and community center.

The other part of the project, which calls for housing and retail, has been moved to another location within Brush Park. That proposal — known as Brush Park South — has not made it past the City Council’s planning and development committee yet.

Catallo told The Detroit News a start date for the rec center project is contingent upon approval from the city. He did not give a new timeline for the project, which was supposed to be finished by the end of this year.

Catallo owns several restaurants, including Vinsetta Garage in Berkley and Clarkston Union Bar & Kitchen in Clarkston. Neil Wallace, the lawyer who has registered business licenses for other Catallo restaurants, in late 2014 filed a corporate license for “Spar Bar LLC,” a name that seems to play off the rec center’s boxing history.

The developers couldn’t figure out how to fit enough parking into the Brewster Wheeler site fronting Interstate 75 between Wilkins and Alfred, and the city asked Rhea to move to a different site in order to retain both developments, Rhea said.

The land sale for Rhea’s housing and retail component had been moving through the City Council in lockstep with the rec center deal. A City Council subcommittee last week moved the latter to a full council vote, while holding Rhea’s portion back.

Detroit Councilwoman Mary Sheffield said the council wants to see more park space in Rhea’s new development. “That was a big seller for the community,” she said. She wants people to have as much access to the development as possible.

Some members of the Brush Park community are also upset with the sudden sale of city-owned parcels, Rhea said.

Rhea recently told The Detroit News his company’s new plan calls for housing and retail on a collection of vacant parcels about six blocks southwest of the Brewster Douglas center. His Brush Park South plan is now independent of the Catallo and Crain project. It will cost $65 million.

He expects to break ground on the project in the summer 2017, and finish work 18 months after that.

Rhea said his firm had to scrap about six months worth of planning because of the move. “Ultimately, we’re excited,” he said. “This is (a collection) of parcels. We’re creating more varied types of housing. ... We need to be thoughtful.

“It’s a much more expensive project than originally anticipated.”

The new site is roughly bounded by John R to the west, Beaubien to the east, Winder to the south and an alley between Alfred and Adelaide streets to the north. It falls within the Brush Park Historic District, so Rhea’s designs will have to go through additional approval phases after the City Council. He plans to fill 41/2 acres with a mix of carriage houses and town homes.

Rhea’s new plans include about 280 residential units, 20 percent of which will qualify as affordable housing. The original plans had around 100 housing units. There also will be 12,000 square feet of retail space spread throughout the buildings, he said.

The new site shares its northern boundary with Dan Gilbert’s $70 million project. Through the Brush Park Development Co., Gilbert will erect 20 buildings — about 400 units of housing and 20,000-square-feet of retail space — on about eight acres just north of Rhea’s potential site. The vein of greenery and public park space planned to run through the middle of Gilbert’s project will continue through Brush Park South, Rhea said. His development could function as a “mirror image” of the buildings Gilbert’s team is planning on the other side of the alley.