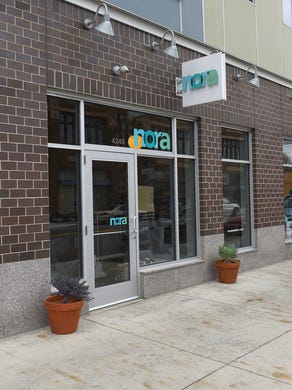 New York-based event planner David Stark stands near some of the products to be featured. Each product was inspired by green space, Culture Lab Detroit's topic this year. Max Ortiz/The Detroit News
Fullscreen

Playing off the theme of green space, an entire wall is covered with 200 bales of straw from a local farm. Once the popup is over, the straw will be taken down and composted. Max Ortiz/The Detroit News
Fullscreen

The names of the international designers -- including Paola Navone and Estudio Campana -- are planted in dirt in a wheelbarrow in Nora. Max Ortiz/The Detroit News
Fullscreen 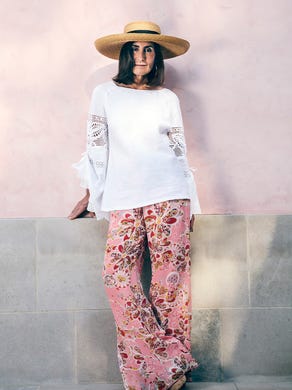 Jane Schulak founded Culture Lab Detroit in 2013, in partnership with the Detroit Creative Corridor Center and the College for Creative Studies. Every year she says she chooses as topic for the organization and green space felt very relevant for Detroit this year. Jesse Chehak
Fullscreen

Detroit artist Victoria Ashley Shaheen, who has a masters degree from the Cranbrook Academy of Art in ceramics, works on a pierced flower rest Culture Lab Detroit
Fullscreen

Shaheen worked in collaboration with event planner David Stark. "The facilitation that Culture Lab has done with artists, designers and the store (Nora) itself is the perfect jumping off point for more collaborations," she says. Culture Lab Detroit
Fullscreen

Stark says the pierced flower rest takes the stress away of arranging flowers, which can be intimidating for some. Prices start at $65. Max Ortiz/The Detroit News
Fullscreen

A ceramic disc top with a glass base, the Pierced Flower Rest is perfect for arranging flowers in an easy way. Max Ortiz/The Detroit News
Fullscreen

The Detroit Cast Aluminum Vase was a collaboration between Estudio Campana in Brazil and Todd Erickson of the College for Creative Studies Foundry. It features a mold of rag dolls from Brazil. Culture Lab Detroit
Fullscreen

New York-based artist and activist, Sebastian Errazuriz teamed up with Samuel Arambula at Detroit's TechShop to create a product called Rock Lamp. It's a photo luminescent lamp made from the unusable and unwanted debris found in Detroit. .
Fullscreen

Prices vary by size and sets, and range in price from $65. to $110. David Stark
Fullscreen

If Jane Schulak were a matchmaker, Detroit would be her muse and designers and artists from around the world would be the city’s suitors.

Ever since she founded Culture Lab Detroit in 2013, Schulak, a Detroit native, has been fostering conversations and collaborations between designers from all over the world and the city. Design may seem like a lofty way to address Detroit’s vast woes, but Schulak believes it can play a role in the solutions.

Now, Schulak is taking that conversation one step further. Teaming up with Nora, a hip, modern housewares store on Cass in Midtown, Culture Lab Detroit today will open a special pop-up shop called Culture Lab Design featuring limited edition Detroit-made products inspired by green space. Each piece was a collaboration, orchestrated by Schulak, between Detroit artists and national and international ones.

“It’s really important to me that every step of what I do is collaborative,” says Schulak, who founded Culture Lab Detroit in partnership with the Detroit Creative Corridor Center and the College for Creative Studies. “Culture Lab Detroit is a platform of connectivity.”

And Schulak hopes that connectivity will continue long after the pop-up closes Nov. 15. Products will be available online at Nora’s website, noramodern.com, until supplies run out.

Culture Lab Design — which has been in the works since early this year — features pierced flower rests, concrete planters, a cast aluminum vase, sculptural rock lights, and an oversized pair of overalls that could double as an apron. International designers such as Paola Navone, Estudio Campana, and Sebastian Errazuriz teamed up with local artists to come up with and develop products.

Nora, meanwhile, also is selling a mix of other pieces also made by local artists to go along with the pop-up shop, including a walnut cutting board by Pontiac artist Jose Reguiero, Mutoscopes by Andy Malone, and a landscape-inspired linens.

New York-based event planner David Stark who collaborated with local artist Victoria Shaheen on a set of pierced flower rests says he was drawn to the project after working with Schulak a few years ago on an event in Detroit.

On Thursday, Stark was busy working with project leader Milana Duthie and others, arranging the new products and preparing for today’s opening. Two hundred straw bales from a local farm were used to create a large straw wall. Planters hand-woven from discarded tires in Detroit hung near a window. Massive concrete planters painted in a tribal motif stood nearby.

Andrew Ward of Detroit’s Line Studio created the planters, sending models back and forth to Italian designer Paola Navone.

“We had a great time” working together, Ward says. “I loved it. ... It’s probably the hardest thing I’ve ever built. The simplest things usually are.”

Plans for the pop-up shop started percolating earlier this year when Schulak brought in designers from all over the world, taking them on a tour of the city, visiting art studios, even stopping by the Dequindre Cut. They quickly wanted to be part of the project.

“They’re just really excited about the energy of what’s going on and the regeneration,” says Schulak.

Schulak says she chose green space as this year’s topic because it felt very relevant for Detroit.

“Every year I choose a topic that is design-driven, but at the same time asks a question,” says Schulak, whose already working on next year’s topic. “It’s something we’re all talking and thinking about it.”

Cass Community Social Services in Detroit worked with New York-based interior designer and furniture maker Kelly Behun to create macrame plant hangers, made from woven together rubber from illegally dumped tires in Detroit. Cass already makes flipflops from the tires, but worked with Behun to go one step further.

“It’s really quite a nice product and a true collaboration,” says the Rev. Faith Fowler of Cass, which provides food, housing and job programs to needy people throughout the city and already makes products from recycled materials.

And working with a professional artist was validating for many at Cass, says Fowler.

Some of the products, which range in price from $65 to $2,000, have symbolic meaning. Chilean-born, New York-based artist Sebastian Errazuriz and Samuel Arambula, a Detroit artist and part At Techshop, collaborated on Rock Lamp, a photo luminescent lamp made from unusable debris left in Detroit. It was designed to spark “a sense of regeneration in Detroit,” according to a press release.

But can art and design really be a catalyst for helping address Detroit’s problems? Shaheen, one of the Detroit artists, thinks so.

“When you think about the impact art, architecture and design has made on the city of Detroit, it’s easy to see how important it is for our times,” she says in an email. “Art and design redefines social practices and unifies people in a way that would never happen in other venues.”