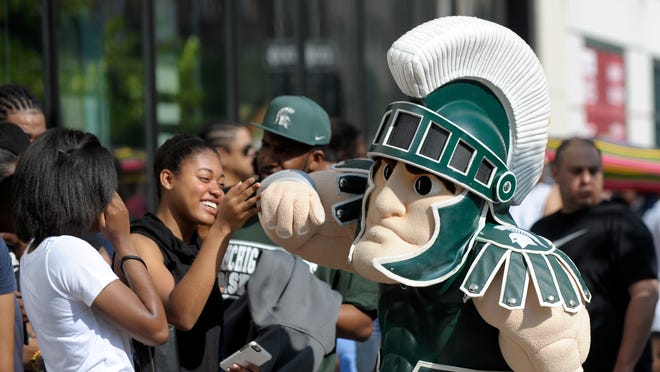 “We are Nike. We are fun. We’re Detroit. We’re No. 1,” the store’s employees, also known as “athletes,” chanted before the doors at 1261 Woodward opened.

The new two-story, 22,000-square-feet store has a mix of factory store merchandise and full-priced products as well as local sports teams’ apparel. It’s one of seven so-called “community stores” in the United States. Like the others, it has a mission to serve their cities through volunteer work and promoting physical fitness.

“If Detroit is going well, that means our state is doing better,” Izzo said.

Nike’s first 200 customers at the former F.W. Woolworth building each received a $10 discount at the door. A similar promotion will occur each day through the end of the week, Nike Communications Manager Hetér Myers said.

The Detroit store is the first to give out grants through the expanded Nike Community Impact Fund. Detroit’s store will select eight local nonprofits or schools in November to each be given $5,000. Applications can be submitted online.

“It was a natural segue of how do we integrate ourselves into the community,” Myers said. “It’s just another example of living and breathing the brand’s values and creating a positive change in the community.”

Detroit resident Marquis Newson arrived at the store at 7:30 a.m. in the morning, though people were lining up as early as Wednesday afternoon.

“It’s good for us. The city needs some more to uplift us,” Newson said. “Nike is going to bring what Detroit needs.”

Nike and billionaire businessman Dan Gilbert’s Bedrock Real Estate hired Sachse Construction Co. as the project’s contractor. CEO Todd Sachse said Nike’s opening is a “spark” in attracting more retailers to Detroit, and he said he expects the downtown area to begin filling up within the next two years.

“We’ve opened up many Nike stores around the country,” Sachse said. “They just open. What’s unique in Detroit is that there’s a huge crowd out there, unlike a typical opening. I think other retailers will say, ‘We need to be part of that.’ ”