Companies are steering customers toward online deals, rather than just physical stores. 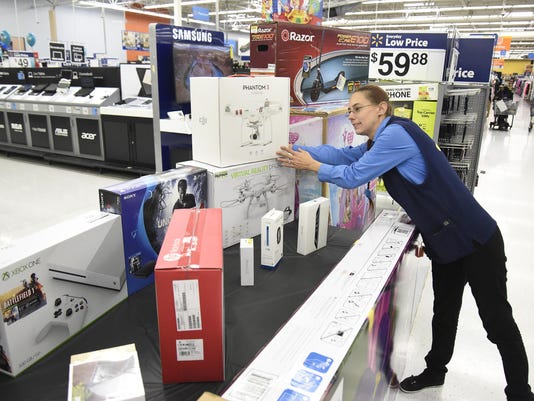 Teresa Hughes-Fox, an electronics sales associate for the Wal-Mart in Taylor, sets up items that are a part of Black Friday deals.(Photo: Photos by Jose Juarez / Special to The Detroit News)Buy Photo

Wal-Mart Stores Inc., Target Corp. and other brick-and-mortar chains are counting on heavier discounts and a bigger online selection to help keep up with Amazon.com Inc. this holiday season.

As Black Friday ushers in the year-end shopping rush, chains are touting larger price cuts than in 2015 — a gamble that maintaining market share is worth squeezing margins. Based on a Market Track study of holiday circulars, Wal-Mart is offering an average discount of 39 percent, compared with 35 percent last year. At Target, the price cuts grew to 38 percent from 36 percent.

“With the lines between traditional brick-and-mortar and e-commerce continuing to blur, the need to make a big splash during large retail events like Black Friday is significant,” Traci Gregorski, senior vice president of marketing at Market Track, said in an e-mailed statement. “The ease of comparison shopping across channels is creating a situation that puts a definitive advantage in the consumers’ hands.”

Wal-Mart and others also are steering customers toward online deals, rather than just physical stores. While the chain still offered Black Friday specials at its supercenters, the day marked the beginning of a streak of online promotions called “Cyber Week.” Wal-Mart has tripled its e-commerce selection to 23 million products this year, aiming to better compete with Amazon. The world’s largest retailer said in a statement Friday that Thanksgiving was one of its top online-shopping days this year and that about 70 percent of the traffic to its website came from mobile devices.

Target, meanwhile, is offering 15 percent off almost everything in its stores and website for two days: Sunday and Monday. The aggressive discounts come at a cost. When Target slashed prices last holiday season, its profit margin slipped to 27.9 percent from 28.5 percent.

The retailer said that Target.com saw double-digit growth on Thanksgiving, marking its biggest day ever, driven by deals on electronics. Televisions, Apple Inc. products and wearable gadgets were among the top sellers.

The National Retail Federation estimates that about 137.4 million consumers will make purchases in stores or online over the four-day weekend that started on Thanksgiving. But the amount that Americans have spent has declined in the past three years, slipping 26 percent from 2013 to an average of $299.60 per person in 2015.

That’s a sign that holiday purchases are spreading out over a longer time frame. Spending during the overall season — November and December — is still expected to grow 3.6 percent to $655.8 billion, the NRF estimates. 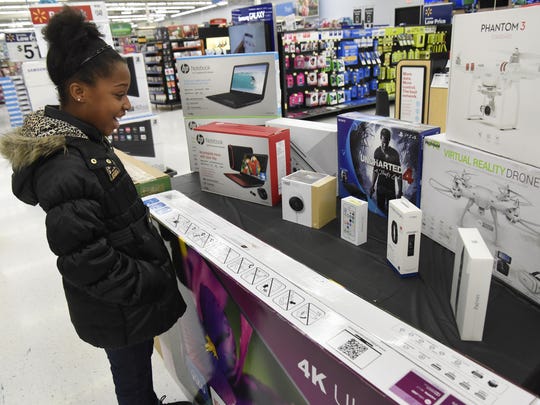 Gifts on sale at the Wal-Mart in Taylor brings a smile to the face of Marnayasia Milan, 11. Retail analysts expect more spending this season. (Photo: Jose Juarez / Special to The Detroit News)

With Americans shifting their purchases online, the urgency of offering deals on Black Friday itself has diminished. For instance, eBay Inc. made a plea for consumers to start shopping on their phones the day before Thanksgiving, christening the event “Mobile Wednesday.”

One thing giving retailers optimism this year: There may be pent-up demand after a polarizing presidential election. Many chains, including Kohl’s Corp., Gap Inc. and Barnes & Noble Inc., blamed the campaign season for hurting spending. With the outcome settled, they’re expecting the dollars to finally flow.

Historical studies indicate that elections affect the timing of retail sales rather than the overall volume, said Jerry Storch, the chief executive officer of Hudson’s Bay Co., which owns Saks Fifth Avenue. That means shoppers will usually spend the same amount, even if the election puts them off spending for a while.

“Hopefully, when we get to Black Friday, which really tolls the bell of holiday shopping, then the consumer will start looking forward to Christmas,” Storch said.

The challenge for traditional retailers is preventing consumers from becoming “locked in” at Amazon. Many shoppers begin their product searches there — and never leave.

“If Amazon had everything, like everything you need in the world, I would buy everything from there,” said Oscar Viral, a 58-year-old chef in New York. “I wanted something from Macy’s, and I got on the internet because they didn’t have it available in the store.”

No matter when they shop, customers will be hunting for bargains. While a survey of about 1,000 U.S. consumers by AlixPartners indicated that 83 percent of shoppers expect to spend about the same or more this holiday season, mobile phones are making price comparisons simpler than ever.

“We like to scope it out in person, then we go online,” said Natalie Kelly, a hospitality worker in Florida who was shopping at a mall in Manhattan earlier this week. “To get me to go into the department store, things would have to be discounted more than they are online.”