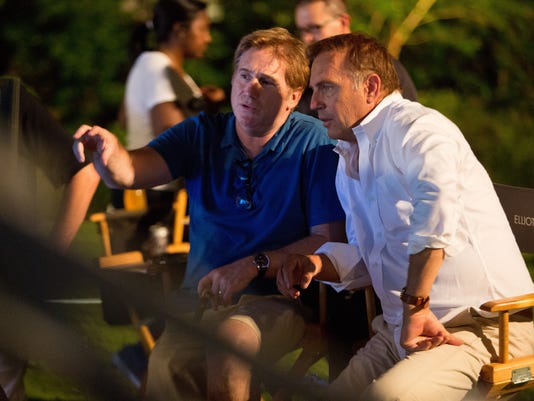 Director Mike Binder discusses a scene with his friend, movie star Kevin Costner, on the set of “Black or White.”(Photo: Tracy Bennett)

The Detroit-born, Birmingham-raised Binder had collaborated with Costner successfully on 2005's "The Upside of Anger," but after that, each "no" from the actor was quick — and firm.

Because the two are friends, Costner felt bad.

"Kevin said, 'I think you're never going to send me another script, I've ruined it for us,' " Binder, 56, recalled. "And then I sent him this one, for 'Black or White.' He read it and said, 'Yes, let's do it.' And we basically shot the script he read."

"Black or White" is the story of a wealthy Southern California lawyer, Elliott (Costner), who is raising his 7-year-old biracial granddaughter Eloise (Jillian Estell) by himself. After the death of his wife, who has largely taken care of Eloise since birth, Elliott finds himself embroiled in a custody battle with her black family who live in Compton, led by her grandmother, Rowena (Octavia Spencer), and including her whip-smart attorney nephew, Jeremiah (Anthony Mackie), and drug addict son, Reggie (Andre Holland). The film opens today.

Costner did better than accept the role; he put his own money up to make the film. Unspooling a gravelly, age-appropriate voice, the 60-year-old looks comfortable enacting the gruff, yet sensitive grandfather, and there are some tender moments when he plays opposite Estell as Eloise, a granddaughter who clearly adores him. Binder says the two actors formed such a tight bond that in one emotional scene, the little girl impulsively kissed Costner, an action that wasn't in the script.

Binder also provided the actor with that Costner specialty, the movie-defining soliloquoy.

Perched on a sofa in a room at Birmingham's Townsend Hotel, Binder explained why the actor took the role.

"I think (the script) spoke to him, and it felt like a spot on the horizon he hadn't really hit yet. Timelessness is important to him, he thought if we do it right, it's a movie that's going to live a long time."

Intriguingly, the bare bones of the storyline mirrors a situation in Binder's own family. His wife's sister died, leaving a biracial child, Shawn, whom they took in, leading to many interactions with his black family. Binder changed the sex of the child and fictionalized the story, adding a custody battle and having a grandfather be the primary caregiver.

Although many of the situations are comic, the film also offers uncomfortable moments in terms of race and class. Eloise's teenaged mother became pregnant by a drug dealer, and she didn't tell her parents she was pregnant. She died in childbirth, and Elliott and his wife raised Eloise until the grandmother's death. As Elliott, Costner seethes with anger at the way Eloise's crack-addicted dad treated both his daughter and granddaughter and drinks to excess. He also furiously resists the efforts of Grandma Rowena and her family to spend time with Eloise.

There are many feisty interactions between Costner and Spencer; the latter alternates between hugging and kissing her reluctant in-law, and telling him off.

"One of the things with this movie that's interesting, I don't know how much Kevin wants to admit it, but I think the sweet spot of his audience is women," Binder said. "Women love Kevin Costner, and I think this is the first movie in a long time that plays to women."

For his part, Costner has explained in interviews that he had to finance the film not because the script wasn't admired by producers — but because it's a smaller, quieter film, not the genre Hollywood green-lights these days.

That didn't deter him; he felt it could have the same longevity of another "small" film, "Field of Dreams."

"You get a chance every so often to make a movie that stands the test of time," Costner told Matt Lauer on the "Today" show Thursday.

While the film has drawn raves from outlets such as the Los Angeles Times and Variety, there's also been criticism of some of the racial elements, specifically the drug addict, absentee father.

"There's no way everybody is going to like this movie," Binder said. "But it's played to several standing ovations. I showed it to Eric Holder, the attorney general, and Valerie Jarrett (senior advisor to President Barack Obama), and they loved it. Then I read bloggers who think it's racist and trite and cheap, and I say, 'OK.' This is a movie that's going to land in all different places and people are going to bring their own viewpoint.

"My biggest detractors on the movie are not black people, they're usually white people, usually liberals," Binder said. "Which surprises me, because I consider myself a liberal. But they're having trouble with what they see as stereotypes in the film. By and large, black people had didn't have that problem."

Steve Harvey called it "one of the best movies I've seen in a long time," on Twitter, and urged his fans to go see the film. Bishop T.D. Jakes also is a fan.

Binder welcomes discussion, and even dissent — anything that gets people talking.

"Regular audiences really love the movie," he said. "They come out, and they want to talk. And I wanted to do that movie where we say, 'Let's go have a piece of pie and a coffee, and talk about it.' "

The movie Binder is currently working on is a "Michigan story," set in a small town, and Binder said he hopes to lure Costner to do another Detroit story soon; the actor played a Metro Detroit suburbanite in Binder's "The Upside of Anger."

"I've got a bunch of Detroit stories," Binder said. "I just have to get to them, get them financed and made."

Maybe you remember him as a regular on Chuck Barris' "Make Me Laugh" (and he often did), or maybe you saw one of these films: